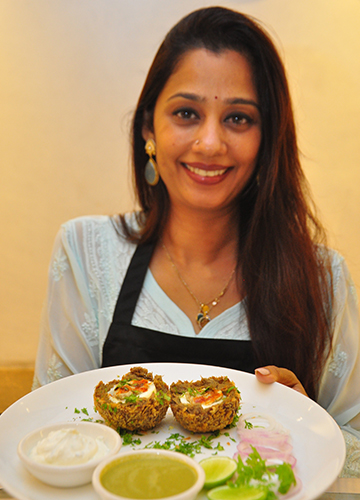 A PRESSING QUESTION: How did an important dish of the Nizam’s kitchen almost disappear from the Deccan cuisine of the 21st century? Kursi miyane, an appetiser, was popular in the erstwhile princely state of Hyderabad, which comprised present-day Telangana, Marathwada in Maharashtra and parts of Karnataka. Its main ingredients are boiled eggs and minced meat (kheema). The dish most probably derives its name from its presentation; the boiled eggs are supported by skewers, which act like a chair (kursi).

To understand more about the dish and to find its living patrons, we set out on a journey across the kitchens of Hyderabad. There were seats available at most Hyderabadi restaurants, but no sign of the ‘kursi’ we were looking for. So we turned to plan B: Visiting established home chefs known for their Hyderabadi biryani, haleem and other dishes. Mission unsuccessful—most of them had not even heard of the name.

Finally, we knocked on the doors of a prominent Hyderabadi historian, Mohammed Safiullah, who is sitting on a culinary goldmine. During his research on Hyderabad cuisine, he stumbled upon an old cookbook from a local library. The book, Ninanat-khana-e-Mahboob, was published in 1877 and contains 680 recipes from the kitchen of the sixth Nizam, Mir Mahboob Ali Khan, who was known to be a gourmet. According to Safiullah, the book mentions 70 varieties of biryani, none of which used basmati rice. “Only local and aromatic rice varieties like chitti muthyalu and kaala baath were used to make biryani,” he says. Safiullah, who belongs to an old Hyderabadi family, said that most of the dishes in the book are almost extinct now. The book written in Parsi and Urdu did not, however, provide any information on the elusive kursi miyane. 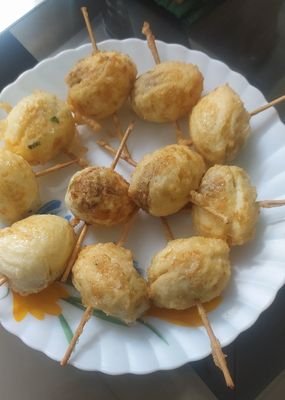 Though a Punjabi by origin, Chef Pradeep Khosla is a dab hand at Hyderabadi cuisine. “In my 25 years of living in Hyderabad, I have not seen kursi miyane in anyone’s house,” he says. However, Khosla recollected that the dish cropped up during discussions with Mehboob Alam Khan, a food connoisseur and authority on Hyderabadi cuisine. “It was an ornamental dish which was hot and tasty. Today nobody even talks about it,” Khosla says. “It was made years back when there were a lot of cooks in the royal kitchen and each dish had its own specialist. It is tedious to make and gets cold fast. Since nowadays people only want hot food, it is no longer made.”

Delhi-based food writer, Rahul Varma, had written an article highlighting the origins of kursi miyane. He pinned the blame for its disappearance on the changing food habits of Indians. Also because it is labour intensive. “Palates are changing from Ladakh to Kanyakumari. Traditional stuff is dying,” he said.

Close to the erstwhile King Koti palace in the heart of Hyderabad, where the seventh Nizam, Mir Osman Ali Khan resided, is a family that has close ties with the royal kitchen. An 80-year-old man who is suffering from dementia and his late parents were cooks and helpers in the Nizam’s kitchen. When approached, the family members said that they do not make the dish anymore, but agreed to share the recipe.

Kursi miyane is made by slicing a boiled egg horizontally and scooping out the yolk. Cooked minced meat is combined with the yolk and then used to fill the egg. The filled halves are pinned together with a skewer, coated with a beaten egg and then deep-fried till golden.

And then, finally, we taste victory. Kursi miyane lives on in the home of Sanjeev Karan, the grandson of the late Raja Dharam Karan, a minister in the Nizam’s cabinet. In Karan’s pre-Independence mansion, the dish is sometimes prepared by his mother or the traditional cooks who have been with the family for years. “It is a snack and a tasty appetiser. Kursi miyane prepares the body for the main course,” said Karan. “The problem with making traditional dishes is that it is difficult to source certain ingredients like herbs. At that time, there were stores which sold pure herbs. Most of the ingredients we get today are hybridised.”

Kursi miyane is also a staple at the parties hosted by Aparna Gorrepati, a restaurant owner from Hyderabad. “This is something that I learnt from my family,” she said. “My grandmother was a typical Hyderabadi and my grandfather was a doctor. They had their own set of friends and relatives from the Nizam’s time. Through my grandmother’s interactions, a lot of Hyderabadi cuisine has seeped into the family.” The dish is a huge hit with her guests. The first question they ask when she invites them for a party is, “Are you making it?”