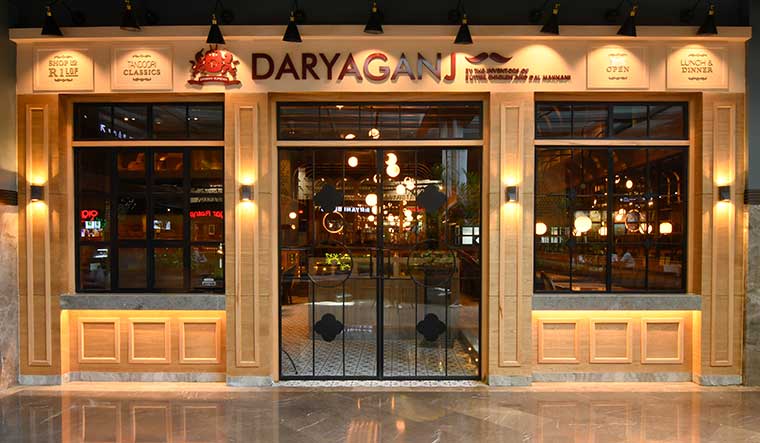 An outside shot of Daryaganj.

GETTING TO THE “original truth” of butter chicken is no easy task. Since the north Indian delicacy was invented in 1947 at an Old Delhi restaurant called Moti Mahal, there have been far too many claimants to the world’s best butter chicken—that coal-fired tandoori classic with meat pieces soaked in a rich, buttery gravy.

For New York-based restaurateur Raghav Jaggi, it is akin to believing the only version of truth that one has grown up experiencing. Like having the multi-layered ice-cream cake that is the gloriously retro Cassata. Once when Raghav ordered the Italian dessert at The Connaught Hotel in Mayfair, London, he got upset when he did not get the ice cream he had known since his childhood in India, with the cashew-flecked tutti-frutti layers of vanilla and strawberry, and the cake at the bottom. The Italian pastry chef at the hotel had to eventually interject, “Listen Mr Jaggi, I am a third generation pastry chef in my family. The Cassata is done in no more authentic way than I do it. And I am really sorry if you are used to some other version, but this is the original Cassata.”

Raghav recalls this embarrassing story to drive home how multiple versions of butter chicken have thrived since that one propitious night in 1947 when his grandfather, Kundan Lal Jaggi, co-owner and chef at Moti Mahal, quickly rustled up some leftover tandoori chicken for a group of hungry refugees.

Now, as a third generation restaurateur from the first family of butter chicken, Raghav and his best-friend Amit Bagga know how to handle sensitive patrons of the Punjabi staple, which has remained a mainstay of ‘Indian cuisine’ globally. In the menu of their restaurant brand Daryaganj—which opened in Delhi in 2019, and pays homage to the original location of Moti Mahal in Old Delhi—the main course includes two kinds of butter chicken. The ‘Original 1947 Butter Chicken’ is made with the secret recipe of Kundan Lal Jaggi, who never used any mixer-grinder or commercially packed cream. And ‘Today’s Butter Chicken’ is an empathetic nod to the McDonaldisation of the dish. Recreating the magic: The original 1947 Butter Chicken served at Daryaganj.

Beyond re-introducing original, authentic flavours for the modern palate in a commercially viable manner, Daryaganj also seeks to represent a time and ethos when food and hospitality came from a place of love, kinship and resilience. “Think of yourself as a 23-year-old who has lost everything, whose wife is pregnant, and who has just been told that this part of India is no longer your country. And you have a matter of few days to make it to the border. If not, you will be killed. And there are millions of others who unfortunately have had to make this move,” says Raghav, reiterating the horrors of partition.

In the 1930s, Kundan Lal Jaggi had started working at Mokha Singh’s restaurant, Moti Mahal, in Peshawar, as an apprentice cook. It was here that the tandoor oven, meant for baking bread, was first used for cooking meat. In 1947, many refugees from Peshawar settled in the Daryaganj area, including Mokha, and the Moti Mahal in Peshawar was closed down.

It was in an alcohol shop here that Kundal Lal Jaggi and two other friends from the restaurant serendipitously chanced upon each other. The three friends—Kundal Lal Jaggi, Kundal Lal Gujral and Thakur Dass Mag— became partners and re-started Moti Mahal in Daryagarj, with Mokha’s blessings. It became the first restaurant in India to offer tandoori cuisine.

“It was all about persistence and not giving up in life, but really feeling blessed for the fact that you did not get killed during this transition. And you had another day that God gave you to stand up and breathe. We started Daryaganj to celebrate this joy and love and warmth,” says Raghav. Daryaganj, with five outlets in Delhi now, three of them opened during the pandemic, plans to set up more in Singapore, Australia, Canada and the UAE. “In the next few years, we plan to open 100 outlets all over the world. What Italy and Naples did with their pizza, we will do for the butter chicken in India,” says Amit.

Through the 1950s, 60s and 70s, Moti Mahal became the city’s most sought-after dining destination, patronised by dignitaries like Jawaharlal Nehru, Indira Gandhi, John F. Kennedy, Nikita Khrushchev, Maulana Azad, Zulfiqar Ali Bhutto, the Shah of Iran and Richard Nixon. Nehru had the owners set up a tandoor at Teen Murti House for providing state guests with the choicest of Peshawari fare. Other north Indian staples were also supposedly invented here, including the ubiquitous dal makhani and gatti pulao.

Then, some time in 1992, the two remaining partners Kundan Lal Jaggi and Kundal Lal Gujral sold the original Daryaganj property to Vinod Chaddha. The Moti Mahal brand and the running of its franchises went to Kundan Lal Gujral’s grandson Monish Gujral. There have been feuds about who makes the most authentic butter chicken among the children, and who actually invented it between the two Kundan Lals. But Amit and Raghav are not unduly bothered. “I sat with Kundan Lal Jaggi when he was alive and understood all about the tandoori recipes that he mastered. Jaggi was always at the backend. He managed the kitchen and did the cooking. Gujral was at the front end, managing the guests,” affirms Amit.

Their self-assurance and determination to salvage and restore the legacy of butter chicken as it was meant to be—without the food colour or the extra spiciness or the creamy heaviness—is already reaping dividends, with food critics and diners extolling its subtle flavours. Most of the older dishes like barra kabab and nargisi kofta are retained in the Daryaganj menu. “The role my grandfather’s restaurant played in the country once was unparalleled,” says Raghav. “It did not matter who you were or where you came from. The saying was, if you come to India, you eat at Moti Mahal and go see the Taj Mahal.” Amit and he intend to create the same magic with Daryaganj.