Indra Nooyi describes her first brush with the American style of education, which was radically different from what she saw back in India, and how they both taught her a thing or two about excellence.

At first, I was aghast by my American classmates’ relaxed approach to almost everything, and then I was in awe. They exhibited a swagger that no one would have dared in India, where, for two decades, I had watched students stand up in respect whenever a teacher entered the room. Students at Yale put their feet on the desks, munched on sandwiches, called the professors by their first names—“Vic” and “Dave.” They walked in late or left early and boisterously challenged the teachers’ points of view. I found the free-flowing discussions spectacular. Topics were explored in depth; pros and cons debated. I’d never been part of anything like it.

In the first week, we were asked to form groups of eight by chatting with the people next to us, then told that this was our study group for the next two years. We named our group, with three women and five men, Don’t Look Back. Together, we went through arctic- and desert-survival simulation exercises and had professors watch our group dynamics through a one-way mirror and then offer candid feedback. That experience was humbling. I realized that I had a lot to learn—how to let others finish, to watch my body language, and to include everyone in group conversations. I had to speak clearly and deliberately and remain pithy with my interjections. After the first feedback session, I was a little disillusioned. But I started to perform better when I incorporated all the suggestions.

This was my second master’s degree, but it was entirely different from IIM Calcutta: practical not theoretical. Actual cases were used to study business issues. Leaders of industry and government came to talk about real-life examples. I was surrounded by people with at least two or three years of work experience. Class was a two-way experience.

The faculty were simply superb. William Donaldson, who’d cofounded the Wall Street investment bank Donaldson, Lufkin & Jenrette and served in Richard Nixon’s State Department, was the dean. Stephen Ross, who developed arbitrage pricing theory, taught microeconomics; Victor Vroom and David Berg taught individual and group behavior; Marty Whitman, the value investor, taught investments; Larry Isaacson, who’d worked for McKinsey and then CBS Records in California, taught strategy and marketing. Each was an expert in his field and respected by many. I found that they made the complex simple and understandable.

Larry, in particular, really believed in me and pushed me to do more. He let me opt out of some basic marketing classes and work for him on consulting projects. I taught a class for him to about fifteen women from the area who were returning to work and wanted to brush up on marketing, consumer segmentation, and advertising. I saw hope and fear in these women; they were optimistic that their new skills could allow them to return to paid work but afraid that they wouldn’t get a job or that they wouldn’t be fully prepared for one. I taught them and, more important, helped build their confidence.

Once a week during lunch, the assistant dean would meet with students to hear our ideas and concerns. That the school’s administration wanted to listen to students’ input on quality of life at SOM and the curriculum amazed me. What a difference from the top-down approach in Indian educational institutions. The one commonality with IIM Calcutta was that business was still a man’s world. We studied no business cases with women leaders, and I had no female professors. Women did not feature in what was taught to us.

In my second year, the coursework was magical—electives in finance and strategy, game theory, trade, and multi lateral organizations. We parsed Burton Malkiel’s A Random Walk Down Wall Street. We examined the rise of Gillette, the razor maker, and analyzed the troubled finances of the Metropolitan Museum of Art in New York, and Clark University in Worcester, Massachusetts. We learned about political polling and talked with Eric Marder, the pollster for Henry “Scoop” Jackson, a US senator who had run for president in 1972 and 1976. 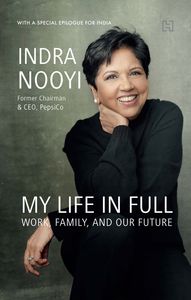 My Life in Full: Work, Family and Our Future