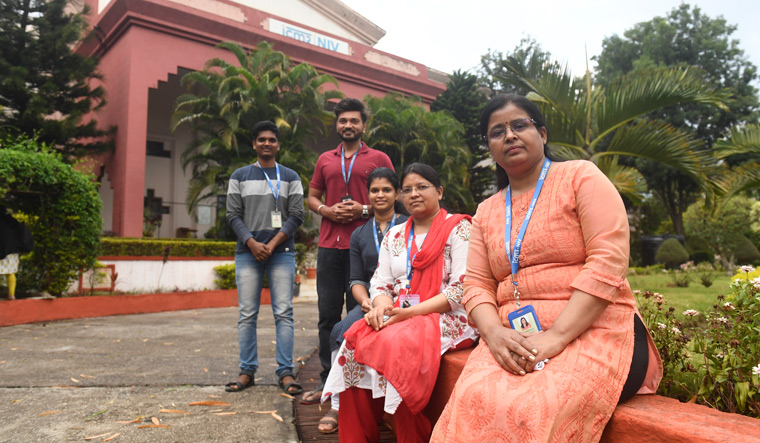 My team of four scientists and technical staff has been working on coronaviruses and other high-risk diseases inside the highly-secured state-of-the-art containment facility called Biosafety Level-4 (BSL-4) at the National Institute of Virology’s Microbial Containment Complex (MCC) since 2012. But last year things were different; we lived by the minute, in clockwork precision. Working in this laboratory under tightly controlled conditions is physically demanding, emotionally draining and mentally exhausting.

Our families never got to see much of us. Our team worked round the clock. We knew the standard operating procedures, but the scale was enormous and the fear of contracting the virus was lurking in our minds like

never before. But, we were also sure of our safety. The BSL-4’s design is one of the finest in the world, with high-efficiency particulate air filtration systems, airlocks to enter “hot” areas containing pathogens, positive pressure delta suits with air supply systems for breathing, not to mention rigorous decontamination procedures.

While we wear the zipped BSL-4 suit with positive pressure, the pressure outside is negative, which in a way makes it challenging. People coming out of the lab must decontaminate and doff their suits, and enter the bath to shower thrice before exiting the lab. So, at any given point, each team member would have spent at least five to six hours at a stretch inside BSL-4 before being relieved. At a time, two scientists/technical staff would go inside the laboratory as per protocol.

One of the things our bodies learn quickly is not to feel hungry, thirsty while the mind is at work inside a restricted environment; the negative airflow through the suit dehydrates you fairly quickly.

What happens when we are hit by the common cold?

We give our samples for testing and follow all safety procedures laid down by the institute. Until we are fine we do not enter the laboratory.

The moment China released the sequences and declared the genome of the virus we had to be ready with testing and diagnostics to screen samples and have all necessary information in hand to be able to help with anti-viral, vaccine development, drug testing and serology assay development. But to be able to do that, we had to first isolate the virus and propagate it because it was a new pathogen. We tried thrice from the positive samples from Kerala, but the virus isolation attempts failed considering the temperature constraints of shipment of samples—between 4 and 8° Celsius (not favourable for isolation); we wanted them to be at least at minus 20° Celsius. It was frustrating, but we kept going. Then, after a wait of almost three weeks, when our desperation was at its peak, the next batch of samples arrived in dry ice, when Italian tourists arrived in Delhi and Jaipur and that was how we were able to isolate and grow live SARS-CoV-2 inside our containment lab.

A year-and-a-half later, we can do any kind of testing required and extend support to anyone who requires it. These testing times have also been a period of validation of our strength, India’s capacity, self-sufficiency and self-reliance, and also validation that ICMR-NIV Pune and its containment lab are at par with international standards.

Dr Yadav is a scientist at the National Institute of Virology.