COVID-19: Why the next three months are crucial 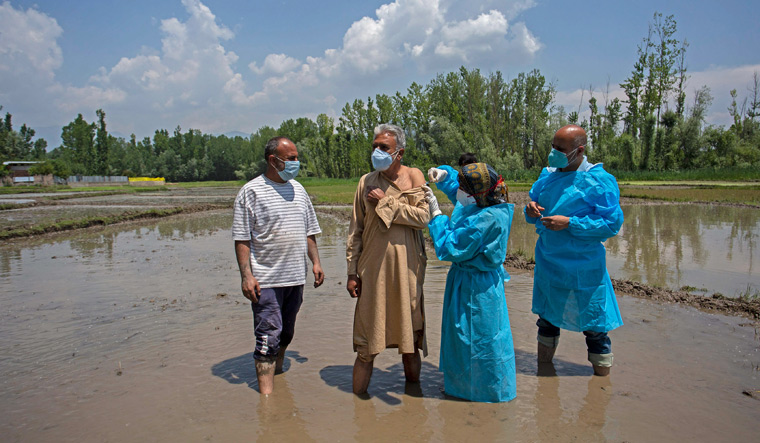 Field jab: A man receives a vaccine from a health worker in a paddy field in south Kashmir’s Pulwama district | Getty Images

On May 6, India reported more than four lakh new Covid-19 cases. Exactly four months later, on October 6, the number had fallen to 18,000—the lowest in the previous six months, according to the Union government. The numbers have remained low for the past three months as well, never crossing 50,000 a day.

Four months ago, there were 37 lakh active Covid-19 cases in the country. Now the figure is below 2.5 lakh, less than 1 per cent of the total number of cases reported so far. India’s current test positivity rate is 2.3 per cent, below WHO’s desirable benchmark of 5 per cent. The R-value—a good indicator of the virus’s ability to spread, since the value signifies the number of people that one infected person will pass on a virus to, on an average—is well below the red mark. It has come down to 0.92, from 1.31 in the first few days of May.

The severity of infections and hospitalisations across the country, especially in cities like Delhi and Mumbai that had previously reported a high number of cases, have also come down. In Mumbai, less than 2,000 of 19,189 Covid beds were occupied on October 5. Only 8 per cent of oxygen beds in the city are in use, while there are no containment zones in the slums and chawls that had earlier struggled to contain new infections. Likewise in Kerala—which had received early plaudits for its exceptional pandemic control measures but began reporting the highest number of Covid cases in August—most new infections had symptoms that were less severe.

Delhi, too, has been showing signs of relief. Of 16,270 Covid-19 beds, only 267 were occupied on October 5. The number of occupied ICU beds was lower—hardly 2 per cent. This has led to municipal corporations and state governments across the country allowing the reopening of public parks, cinemas, restaurants and offices. Children have been allowed to resume in-person classes after spending more than a year and half at home.

Does this mean that Covid is now losing virulence?

Clearly no. Rather, it only goes to show the impact of administering 87.1 crore doses of Covid vaccines across India. It has led to a large number of citizens developing antibodies against the virus, say experts. About two-thirds of the adult population have now received at least one dose; almost a quarter have received both the doses.

This will eventually lead to a time that Dr Soumya Swaminathan, chief scientist at WHO, wishes to see: a stage of endemicity where the spread of the virus loses its pandemic proportions and only a low or moderate level of transmission goes on. (See interview on page 52.)

“This means that India is moving toward a time in the near future, when the population will learn to live with the virus, and only those areas with low levels of vaccine coverage could witness fluctuating transmission for the next several months,” said Dr Chandrakant Lahariya, independent researcher and public health expert who was with WHO for 13 years. “‘Endemic’ is to highlight that the risk of transmission is coming down, but will never become zero. The cases will continue to be reported, but will not be very high.”

But such a situation is not a given, warns Dr Priya Abraham, director of the Indian Council of Medical Research-National Institute of Virology in Pune. “The numbers will keep from rising only if people strictly continue to follow Covid-appropriate behaviour, take their vaccines on time and wear masks in public places,” she said. “We must remember that the virus has not gone away. It is very much in our midst, and it continues to be highly infectious and transmissible even now. But we need to prevent its fast spread, because quick transmission encourages the creation of mutations and variants.” (See interview on page 44.)

The next three months are going to be crucial. Doctors continue to be wary given that India is entering the festive season—Navratri, Puja, Diwali and Christmas. Then there is the rough and tumble of assembly elections in five states early next year. “Being fully vaccinated does not give us the licence for going out with gay abandon,” says Dr Lancelot Pinto, consultant pulmonologist, PD Hinduja Hospital in Mumbai. “Experience has shown that infections do spread among those who are fully vaccinated as well, even though the severity is curtailed. But a rise in the number of cases and fast transmission will give the virus opportunities to mutate. And then we will see the onset of the next wave, which we have managed to keep at bay so far.”

Experts say that the notion of developing antibodies as a form of immunity is also not very clear. “We still do not have the actual statistical data regarding how long the antibodies stay inside the human body, and how much protection they give. That is an uncertainty that we have to deal with,” said Pinto.

Earlier, it was believed that herd immunity could be achieved if more than 70 per cent of the population had antibodies. Now, the threshold has been raised to 85 per cent, but it is still not a yardstick. The issue is compounded by the emergence of mutations like the Delta variant, which reduce the immune response after vaccination. 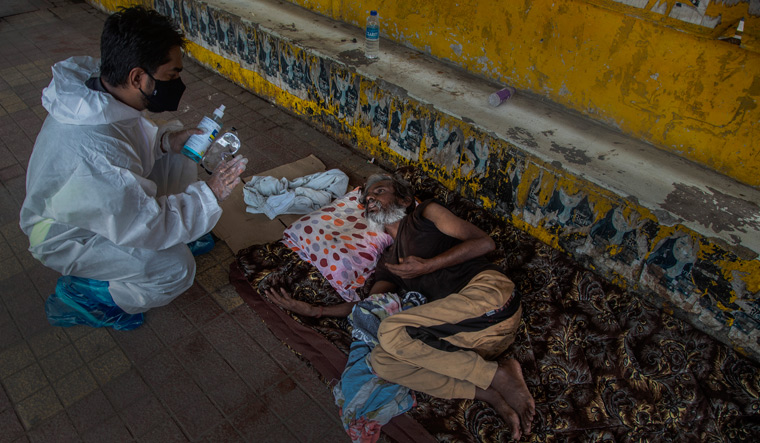 Coax, vax: A health worker persuades a homeless man to get himself inoculated against Covid-19 in Guwahati | AP

The findings of various seroprevalence studies carried out in the past few months should not make one believe that the pandemic has ended, said Dr Shashank Joshi, a member of Maharashtra’s Covid task force. “Serosurveys only tell us about exposure. The sample size for a serosurvey has to be very large—as much as 1 per cent of the population—and it should be a population-based, house-to-house survey. For instance, the serosurvey done in Mumbai by the Brihanmumbai Municipal Corporation had a biased sample, because it was done among only those who visited health care set-ups,” he said. “Also, these surveys only indicate exposure, and seropositivity does not translate into protection. Also it does not signify the end of the pandemic—because, if there is a new variant of concern, all this will go down the drain.”

India’s response to the virus in coming days would depend a lot on the medical weapons in hand. With Indian pharmaceutical giants stepping up, hope has stayed afloat. While the Serum Institute of India is on track with its vaccine trials on children (it wants to include children from two to six in the next phase), Zydus Cadila MD Sharvil Patel says he hopes to launch the world’s first DNA-based vaccine, ZyCoV-D, as early as mid-October.

There is some cautious optimism, too. Veena George, the health minister of the widely written about Kerala, says the entire targeted population in her state will be vaccinated by November and things would return to normal.

PGIMER director Dr Jagat Ram, meanwhile, says that the third wave is almost here, but that it would be a low-magnitude one.

While words like these may offer hope, it is action at the individual level that will see us through. Even as virologists, doctors, scientists and health care workers keep battling the virus, as the stories and exclusive interviews on the following pages highlight, it is important to remember that the average Indian, too, has a role to play. As AIIMS Director Dr Randeep Guleria says in an exclusive interview, India could be in a safe position within a month or two, only if there is Covid-appropriate behaviour.

If we want a better 2022, where classrooms, parks and theatres are full, and we can vacation and visit faraway relatives, our behaviour must be better than what the virus expects from us.