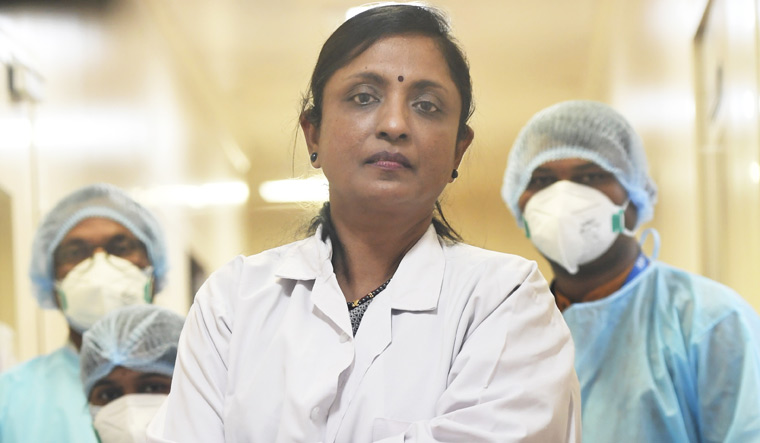 Dr Priya Abraham was barely two months into her job as the director of the National Institute of Virology, Pune, when her lab stumbled upon a specimen that would later be confirmed as the first Covid positive case in India. Among the Indian Council of Medical Research’s 27 institutes, the NIV’s mandate is to be a watchdog against viral infections. Its microbial containment facility in Pune has been working with the actual living virus of the SARS-CoV-2 Delta variant. In an exclusive interview, Abraham tells the week about the “trial by fire” at the NIV, the current “relatively quieter” period, the changing behaviour of the virus and why it is too early to bring down one’s guard. Excerpts:

What is your current assessment of the Covid-19 situation?

The virus has not gone away. It is very much in our midst and it is equally highly infectious and transmissible even now. But we need to prevent its fast spread because the quick transmission will encourage the creation of mutations. We are slowly upping the percentage of people who are completely vaccinated. A good number of people are adhering to social measures required to curtail the spread. So we are seeing a lower number of cases across the country, except in some states. Vaccines are extremely effective in preventing serious disease and deaths due to the virus, including the Delta variant, but it is a fact that they are not able to give more than 90 per cent protection against picking up the infection. Hence, following Covid appropriate behaviour is still recommended.

How long can the vaccines protect us?

At least for six months. The big manufacturers are looking at studies to see when we can give boosters. In high-income countries, the delivery of boosters is happening because of the wide availability of vaccines and shots. So the mRNA vaccine manufacturers have begun to recommend boosters for individuals who are immunosuppressed, more vulnerable to developing serious forms of disease and whose immunity is sub-optimal. As of now, we know that a very small proportion of the world has got vaccinated. So the data is still evolving for us to know exactly how long a vaccine can protect us. More real-world data is awaited, but we know approximate six-month protection is definitely there.

Are the recommendations for booster shots propaganda by vaccine companies?

It may be. I know of those who have taken the fourth dose against Covid-19 in a rich country within this year. Isn’t that insane? There is no formal recommendation in this regard yet. Also, I believe we must speak up against vaccine inequity in the world with some nations vaccinating almost their entire populations while others barely manage to have 5 per cent vaccinated. We have vaccinated only a little over 25 per cent of our population till now.

There have been reports that a fourth wave is hitting the US. Should we worry, too?

To me, a wave is a significant surge in cases—a peak that comes in a particular geographic region. We have clearly experienced two waves that were fairly significant across the country. But, as a nation, we haven’t gotten our third wave yet because we haven’t seen that kind of unprecedented or notable surge in cases after the peak of the second wave. We might invite it because of our lackadaisical behaviour during the approaching festive months and elections in some states, and also because of our inability to penetrate pockets with sufficient vaccination. There is Diwali, Dussehra, Christmas, New Year and then the elections early next year. If we all adhere to public health and social measures, then any wave will not be significant. But if not, then it will be upon us sooner than we think. In some parts of the US, there has been vaccine hesitancy and scant regard for masking. So, yes, a fourth wave is not completely impossible in such situations and smaller waves thereafter, too.

What is the latest knowledge about the virus?

That over 85 per cent of all breakthrough infections we have seen even after full vaccination have been due to the Delta variant. That is the latest and most troublesome piece of information. A study was done across 17 states and Union territories from March to June by ICMR along with some of the Virus Reference Diagnostic Laboratories of the Department of Health Research.

What is the next expected form the virus will take and how would it behave after 24 months of creating havoc?

I would imagine that as more and more people get vaccinated, and as many have already experienced infection, transmission comes down a little, and this might go into an endemic form. Like what happened with the H1N1 pandemic. There will not be any more ferocity of spread as we saw at the peak of the second wave. Perhaps in the next four to five months, the infection will become endemic. But that is only if we don’t become lax. Especially as the virus continues to be highly transmissible with an R0 average (a figure expressing the average number of cases of an infectious disease arising by transmission from a single infected individual) around 6.5 to 7, which is much higher than many other viruses. This means you can pick up infection even if you are vaccinated, transmission can also happen but you are unlikely to have serious forms of the disease. Endemicity comes as more and more people get exposed to the virus or vaccine and then the pace of spread slows down.

Should children be vaccinated?

Children, when exposed, do get infected and they can transmit the virus. However, most children mount such a good response that they do not even have a detectable virus because their immune response is able to neutralise the virus effectively. It is a broad-based and vigorous immune response which releases certain cytokines that also prevent immune-related damage of the lungs, which was commonly observed in adults. So, even if unvaccinated, most children will not develop complications from Covid-19 infections. Children, too, will eventually get the vaccine.

Tell us about the latest breakthrough research at NIV that can also be applied to Covid-19.

In that which can be applied to Covid-19, the latest is our work in the area of monoclonal antibodies against Covid-19 with a pharma company, which is yet to be published. Zydus Cadila and Roche have come out with monoclonal antibodies that are readymade and are targeted antibodies that are directed against specific regions of the spike protein of the virus. These antibodies can be potentially used as therapy in early cases that have not progressed to severe disease. This is part of a collaboration with the industry. We have done experiments on animal models like hamsters. We can infect hamsters with the virus and give them the monoclonal antibodies and see whether replication, spread and damage to tissues can be arrested because the monoclonal is a highly targeted antibody against a specific region of the spike protein.

Your lab grows and propagates live viruses. Other labs deal with pseudovirions. You also capture bats and contain them for research. This is similar to what the Wuhan lab was doing. Is there a chance for a lab leak?

We are the fifth country in the world to establish isolation of the virus—you know the virus was isolated in cell lines and we were able to propagate it. We achieved it in March last year. This helped with the vaccine because we were able to do pre-clinical trials—we vaccinated hamsters with the candidate vaccine’s three-dose regimen and gave a gap and then challenged them with a live virus. This is the ‘acid test’ for the effectiveness of the vaccine. So, before the vaccine came to human clinical trials, we did these preclinical studies in hamsters and in non-human primates (monkeys). It is done in our highest containment facility that is a Biosafety Level-4 lab. This highest containment laboratory has protective measures needed to protect workers, the environment, and the public. We have studied the fresh tissues of the bats to understand whether bats are reservoirs of other viruses such as the Nipah virus as well as coronaviruses.

We found coronaviruses in our bats but not the RaTG 13, which comes to be the closest ‘cousin’ to SARS-CoV-2. The BSL-4 laboratory has its own dedicated air supply along with vacuum lines and decontamination procedures such that nothing infectious from inside the lab goes out, following the strictest laboratory norms. We have bat specimens in our lab even as we speak. Yes, we capture them for identifying the source of certain zoonotic infections and this is why we use fresh frozen tissues for such studies. We have caught bats recently to look for Nipah virus infection following the recent case but none that we captured had evidence of current infection, though there was suggestion that they harboured infection previously.

Is there a possibility that India would become a hotbed of zoonotic diseases?

Yes. Zoonotic infections, which are infections coming from animals to humans, will be a big concern for humans today. In India, Kyasanur forest disease is a case in point. This is monkey fever which is now seen in Karnataka, Maharashtra, Goa, Kerala and Tamil Nadu. The virus infects humans when they go foraging inside forests. Ticks from monkeys and forest rodents bite humans. Bats also are a reservoir of a number of viruses. Rabies is another zoonotic disease caused by exposure to rabid dogs, cats, cattle, foxes and even bat saliva.