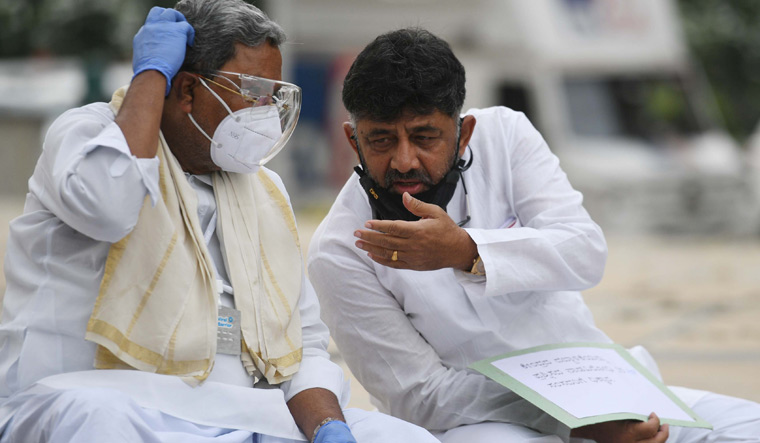 K. Shivakumar’s elevation as president of the Congress’s Karnataka unit in July 2020 had rekindled hopes of a revival of the party's fortunes. A year since, though, the tussle between him and former chief minister Siddaramaiah—the party’s two tallest leaders—has all but dashed those hopes. Amid the turmoil, a third faction led by former minister G. Parameshwara and former Union minister K.H. Muniyappa has been formed, and it is quietly lobbying for a dalit chief minister candidate. The list of leaders jockeying for the post is also growing. The fault lines have appeared at a time when party workers were expecting the leaders to take advantage of the leadership crisis in the BJP. The workers were also hoping for an aggressive campaign against the BJP government for having allegedly failed to mitigate the second Covid-19 wave, prevent deaths, job losses and economic slowdown, and arrest the rise in fuel prices. But a rudderless Congress has been struggling to evolve outreach strategies.

Two major issues have divided the party—whether to press the state government into accepting and publishing a “caste census” (a socio-economic survey carried out by a commission appointed when Siddaramaiah was chief minister), and whether to support the Lingayat community’s movement to be identified as a separate religion. The party’s Lingayat leaders are opposed to making the survey public, saying it would once again result in the dominant communities distancing themselves from the Congress, like they had done in the 2018 polls. Apparently, the survey says the share of dominant communities like Lingayats and Vokkaligas in the state's population is less than what was estimated earlier. Also, within the Lingayat community, there has been a feeling that the movement for securing religious identity was used by the Congress to divide them and reduce their political influence.

Shivakumar and Siddaramaiah have opposing views on how to revive the party. Shivakumar wants to bring back defectors; Siddaramaiah says “traitors” are not welcome. The two have also clashed over appointments in the Congress’s tributary organisations. In July, the party high command had to intervene to end a six-month-old stalemate between the two factions over choosing the head of the state’s Youth Congress unit.

Among the two, Siddaramaiah is considered the ‘mass leader’. A Kuruba strongman with a socialist background, he relies on Ahinda (Kannada acronym for backward classes, minorities and dalit) votes. The BJP had managed to split this vote bank in the previous polls.

Shivakumar, who has for long been CM-in-waiting, is betting on the Vokkaligas in the Old Mysuru region, who now largely support the Janata Dal (Secular). He is reportedly trying to lure JD(S) legislators in Mysuru, Tumkuru, Kolar and Bengaluru. Some BJP members, too, are expected to heed his call.

But unlike Siddaramaiah, who has a clean public image, Shivakumar has long been battling a slew of investigations led by the income tax department and the Enforcement Directorate. Also, Siddaramaiah is seen as a secular leader, but the temple-hopping Shivakumar has been accused of practising soft hindutva. “He is trying to consolidate majority community votes,” said a senior Congress leader, “as internal reports suggest that the party has alienated itself from dominant communities.”