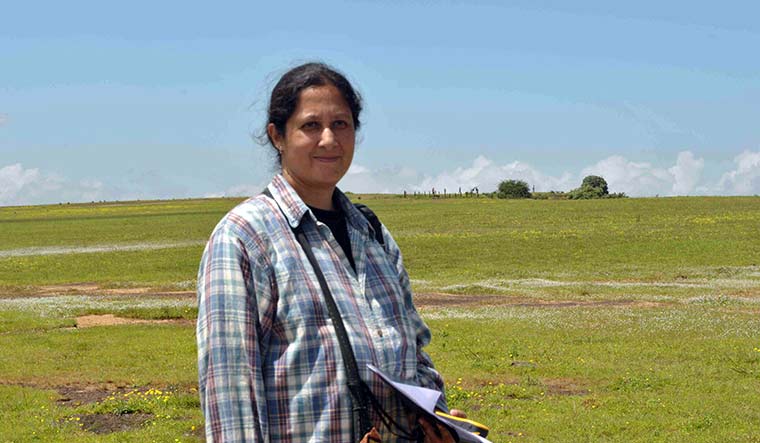 The Kaas plateau in northern Maharashtra comes to life just after the monsoon, when acres of tableland blossom in what is called an “ephemeral flush”. In this brief period of plenty, streams gurgle and bees buzz crazily. In one stream on this plateau, a one-celled alga or diatom was discovered last year and named Navicula watveae, most aptly after Aparna Watwe, 48, the ‘lady of the rocky outcrops’.

Watwe, associate professor at MIT World Peace University, near Pune, has dedicated most of her professional life, first to studying the uniqueness of the outcrops of the Western Ghats, and now, in leading the efforts to save them. These barren-looking plateaux and outcrops have been ignored for long, by officials as well as researchers. It is only in the last few decades that scientists have realised the trove of biodiversity clinging to every cliff face and under every rock here. A harsh landscape that comes to jive only for four months a year, has adapted to life in unique ways when plants and animals speed up their mating and reproducing rituals before the long dry months settle in again. “The very harshness of the land has created some amazing life forms, like carnivorous plants,” says Watwe.

As anthropogenic pressures fall on these outcrops, there are few government policies to protect them, and Watwe is a leading voice for their conservation. “These lands cannot be covered under the forest policy, and we do not have any grassland or outcrop policy,” she says. In fact, for long, these outcrops were considered as wasteland by the government and were the victims of developmental abuse. Even the “clean energy” source of wind farms has impacted the fragile biogeographical balance of these highlands.

“My work initially was to establish the uniqueness and importance of these landforms. Since 2012, I have been working on their conservation,” says Watwe. She has a multi-pronged approach to conservation. She reaches out to local communities, the backbone of any conservation effort, with awareness campaigns. She is the coordinator of an International Union of Conservation of Nature initiative on Western Ghats to bring together habitat restoration experts.

Watwe is an advocate of responsible tourism initiatives. Tourism, she points out, brings much-needed attention to a region, but can also ravage it. “Tourism can bring a lot of revenue, which can be used to heal the degraded lands,” adds Watwe. “There are so many potential spots in this region alone. Kaas has become popular in recent years, but the entire belt of Amboli, Konkan, Sindhudurg are teeming with potential. The need is to strike the right balance.”