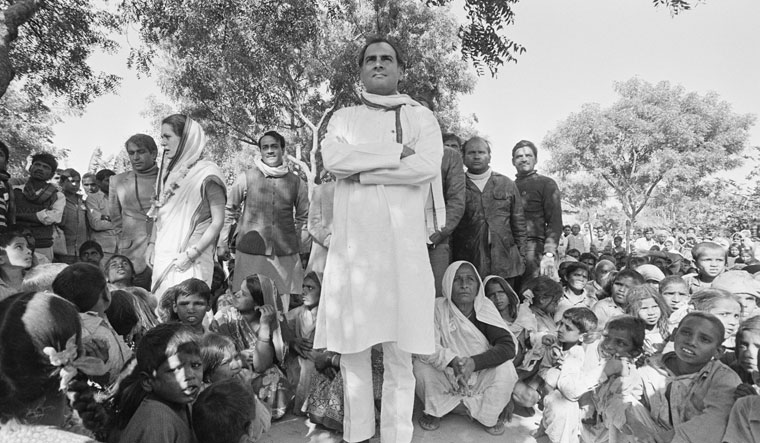 Winning formula: Rajiv Gandhi and his wife, Sonia, during an election campaign in Amethi | Getty Images

In the midst of the Covid-19 pandemic, we are all surrounded by the pain and suffering of loved ones, friends and acquaintances. The devastation is unimaginable, the suffering unfathomable. The nation requires healing. Our people require genuine hand-holding, untiring resolve and relentless hard work to tide over the crisis and its aftermath. These painful times remind me of one of India’s most compassionate prime ministers, Rajiv Gandhi.

Rajiv ji was a doting father, a committed husband, a dutiful son, and a loyal friend. But we all knew that for him, India and its multitude of people were the overriding priority. His unwavering commitment, limitless dedication and zeal to change India and usher it into the 21st century were unstoppable.

Today, as the country is going through an unprecedented national health crisis under a callous leadership which has been found wanting on every count, it is good to recall the life of a youthful leader, who not only dared to dream but implemented massive transformation and change without fanfare and with enduring effect. 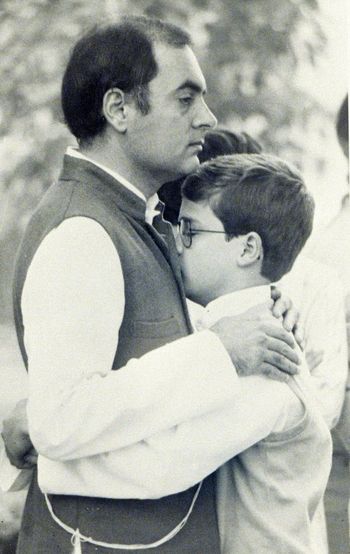 Perils of power: Rajiv Gandhi consoles his son, Rahul, after the assassination of his mother, Indira | Getty Images

Rajiv ji boldly took the road less travelled, and implemented out-of-the-box initiatives to prepare India for the 21st century. He held himself accountable to the people and never hesitated to explain, to answer and to communicate on all and any questions about his decisions and governance. Above all, his passion for science and technology powered India on a path of modernisation linked to global scientific and technological advancement. He used technology as a tool of equality and empowerment for India’s people.

Before any other Indian politician, he recognised the significance of the computer and the internet revolution. Despite the naysayers mocking him and his set of reformists as ‘computer boys’ unconnected to India’s reality, he pushed forward to thrust India into the first line of the league of nations. The result is India's formidable intellectual capital in information technology that the world recognises today. And the telecom revolution that he envisaged reshaped our lives and rewrote the meaning of connectivity for each one of us, not to mention the immense trade, business and employment opportunities that it generated.

Change with continuity was his way. Rajiv ji recognised that India’s traditional knowledge has a deep-rooted yearning for transformative change. Many of his initiatives were founded upon this quest. The technology missions were, thus, his creation. These missions, seemingly mundane and rudimentary, were absolute necessities such as rural telephony, drinking water, weather forecasting, and dryland cultivation. He stressed that laboratory results were important to the extent that they translated into the field and factory. His vision was prescient: one of his more successful technology missions was immunisation, and had he been with us today, I have no doubt that the novel coronavirus pandemic would have been handled very differently.

To him, the rubric of economic reform was the propellant to fire up India’s economy. The 1985 budget, framed under his guidance, broke the old mindsets. The budget initiated a bold process of modernisation, starting the deregulation of the economy. The process was irreversible and opened the way to the path-breaking reforms of 1991. No wonder India’s GDP grew at double digits and the economy bounced back.

Rajiv ji recognised the power of India’s youth as the vehicle of change. From empowering every 18-year-old to elect the government, to reposing faith in the young to shoulder the biggest responsibilities, he set new benchmarks. The story of India’s young guiding our nation’s destiny and occupying the top echelons of decision-making today has its foundation in his indelible faith.

Within the first few months as prime minister, Rajiv Gandhi had his own tryst with destiny and future. He courageously walked the unconventional path of signing several accords, designed to keep the country together: the Punjab Accord; the Assam Accord; the Mizoram Accord; the Darjeeling Accord, to name a few. While difficulties, sometimes grave, beset the process of implementing the accords, the direction of the country was significantly altered from the path of confrontation to the path of reconciliation.

Among his most penetrating insights into the political system bequeathed to us by the Constitution was that while it had made India “the world’s largest democracy”, we were also “the world’s least representative democracy”. This was because Constitutional democracy was confined to Parliament in Delhi and state legislatures in state capitals. This, he saw, enabled the “brokers of power” to insinuate themselves as intermediaries between the people and their elected representatives in Delhi and the state capitals. This realisation set him on a path to ensure “maximum democracy” and “maximum devolution” up to the grassroots to ensure true “power to the people”.

This belief drove him to provide Constitutional status, security and safeguards to panchayati raj and local bodies, making it the first tier of the ineluctable, irreversible and irremovable democracy, same as at the two higher levels of state legislatures and Parliament. The idea was that local communities should take control of their own future. It may not have worked all the way just as envisioned, yet today’s reality reflects 30 lakh grassroots elected representatives across India, with 10 lakh women and an almost equal number of Scheduled Castes and Backward Classes donning the mantle as drivers of grassroots democracy.

Political opponents were not his enemies but only compatriots seeking their place in the polity. His affable nature and easy smile helped him traverse beyond the stringent political lines. He could walk across the aisle as easily as he would overrule his own party to send the leader of opposition, Shri Atal Bihari Vajpayee, to the United Nations as India’s representative. Political prejudices did not ruffle him, nor did the invectives or insinuations, for he believed in his commitment to bring about a paradigm shift in governance in India.

Above all, he loved and respected and celebrated the rich cultural and religious diversity of India. That is why he proclaimed in Parliament that only a secular India could survive—and added that perhaps an India that was not secular did not deserve to survive.

The greatest memorial to his life’s work would be to restore the nation to its innate culture of compassion, of healing and reconciliation, of harnessing intellectual independence and technological adroitness, of entrusting and believing the young, and finally, igniting India’s economy on principles of economic prosperity with equality.

This would be the true affirmation of Rajiv Gandhi’s life.