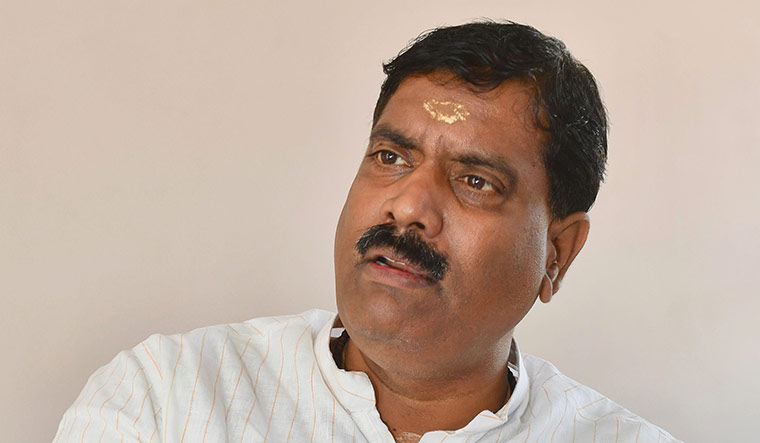 Q/ You are in charge of 112 seats, mostly in tribal areas.

A/ Yes, the party has reposed faith in me. I will not let it down. We will win more than 100 seats from these zones.

Q/ But those areas are known to be Trinamool strongholds.

A/ I am known for fighting. My kundli (horoscope) has been good as far as elections are concerned.

Q/ What is the reason for the BJP’s confidence?

A/ We are not a one-man show. We have a solid team whenever we fight. We have broken the class politics of leftists. Various classes and castes are now supporting the BJP. The Trinamool is passing through a critical phase. Most of their ministers will lose this election.

Q/ Many tribal organisations did not like your party's rath yatra.

A/ No, it is not religious. Look at it as a peace march or a protest rally. It was not intended to cause any harm, but our rath yatra was attacked in many places.

Q/ Why has the BJP made it a do-or-die battle in Bengal?

Q/ But this is the place where nationalism was born.

A/ Exactly, and here was where it was lost. First the Marxists and then the Trinamool throttled nationalism here.

A/ Look at Kerala and Bengal. These are the epicentres of anti-national activities in India. Why is saying 'Jai Shri Ram' and 'Bharat Mata Ki Jai' a crime in these places?

Q/ Not everyone would want to raise these slogans.

A/ The political class of these two states also doubts the Army and the judiciary. They also dispute the coronavirus vaccine. The Marxists and the Trinamool are two sides of the same coin.

Q/ But criticism does not mean anti-nationalism.

A/ Why not? A nationalist can never doubt national institutions.

Q/ What would the BJP offer in West Bengal?

A/ We will instil confidence in the people so that they will be proud to be nationalist again.

Q/ There seems to be a tribal wave in favour of the BJP in the past two years. How did this happen?

A/ Women and tribals are the backbone of the BJP’s support base. We are working hard for them. We will do extremely well as far as women are concerned. This will happen in a state where the only woman chief minister of India rules.

Q/ Why would women vote for the BJP?

A/ Because of the political terror and corruption here. The women are angry with Didi. At the same time, they are happy with the Modi government because they received money during the pandemic and free rice during the lockdown.

Q/ Why did you focus on the women in Bengal?

A/ Because, in Bihar, 65 per cent women voted for the BJP. It was a game changer.

A/ Modi ji has given 01,000 crore for tribal tea workers in North Bengal. In the past years, our government in Delhi has always kept Bengal in mind during the budget.

Q/ You do not have extraordinary candidates.

A/ Our ordinary people will defeat them. We have fielded commoners as candidates. Look at our Saltora candidate. She works as a maid.

Q/ There is speculation that you will be sent to Kerala and projected as the chief minister candidate there.

A/ I have no idea about it. Wherever the party sends me, I will go.