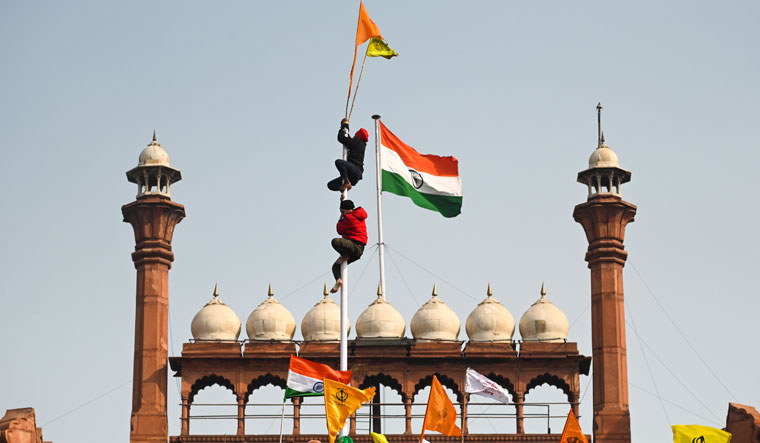 Mark of protest: Protesters hoist the Nishan Sahib, the Sikh religious flag, at the Red Fort in New Delhi on January 26 | AFP

Republic Day celebrations in Delhi bring both national fervour and tight security arrangements that turn the city into a fortress. On January 26, both were breached. In a shocking turn of events, many groups of farmers, who had been protesting the new farm laws on the borders of the state for more than two months, stormed into the heart of the capital and hoisted the Nishan Sahib, the Sikh religious flag, at the Red Fort, the symbolic seat of power. The farmers had been allowed to hold a tractor rally on police-approved routes on Republic Day.

The farmer unions’ demand for the repeal of three farm laws had been gathering support from across the country. But the moral high ground of the movement being peaceful and disciplined was lost in a few hours of violence. And the leadership of the joint command of union leaders seems to have been weakened.

With the use of Sikh symbols, the movement now has a stronger religious colour, and the acrobatics atop the ramparts of the Red Fort, where prime ministers hoist the tricolour every year, have made the accusations of anti-nationalism louder.

The police were ill-prepared, despite intelligence reports that fringe elements could provoke violence. And it has tarnished the Narendra Modi government’s strong governance image. The Delhi Police are under the Union home ministry. It was the second occasion of mass violence in less than a year in the capital city. In February 2020, communal violence rocked the northeastern part of the city for three days.

Home Minister Amit Shah held a series of meetings after the breach and asked the police to take strict action against those responsible. Police registered about two dozen first information reports naming farmers’ union leaders. Close to 400 police personnel suffered injuries in the clash. Armed with legal options, the government seems set to crack down on the leaders. 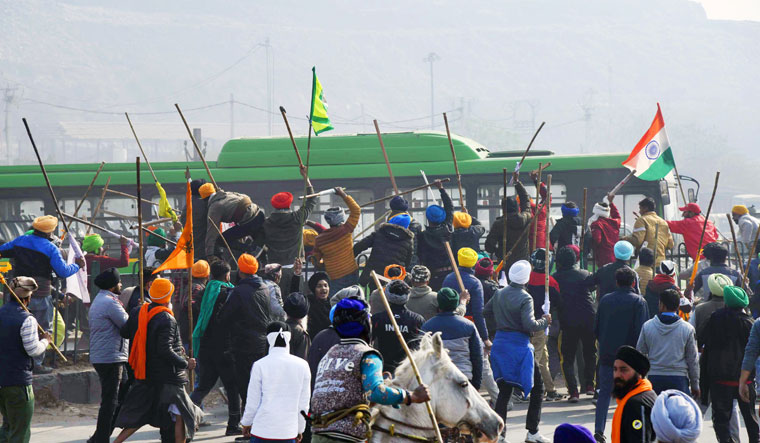 The issue, however, is far from over. “We have been stabbed in the back,” said Rajinder Singh Deep Singh Wala, vice president of Kirti Kisan Union. The atmosphere on the borders of Delhi, which was highly charged till the Republic Day, has descended into a pall of gloom. Many farmers have returned to Punjab fearing police crackdown and violence.

And their goal seems farther now. “What could have been a matter of days now just got extended,” said Balbir Singh Rajewal, president of the Bharatiya Kisan Union (Rajewal). “We are responsible for the lives of our youth. Violence begets violence. One cannot win against the state power with lathis or guns, as Punjab has already witnessed in the past.”

One of the oldest members of the Bharatiya Kisan Union before it split into smaller groups, Rajewal said the movement had been cleansed of elements that tried to colour it. “They stabbed us in the back by going to the Red Fort, hoisting flags and breaking barricades. It was a conspiracy to derail the peaceful movement. People like Deep Sidhu, Satnam Singh Pannu and Sarwan Singh Pandher of Kisan Mazdoor Sangharsh Committee have been exposed,” he said.

Sidhu, an actor-turned activist, has been a constant fixture at the farmer rallies. He was closely associated with the BJP’s Gurdaspur MP Sunny Deol. Sidhu was Deol’s man Friday when he entered politics. Farmer unions say Sidhu and Lakha Sidhana, a gangster-turned-activist, forcibly took control of a stage at the Singhu border on January 25 and instigated people to march to Delhi, as opposed to the Samyukta Kisan Morcha’s decision to hold the rally on routes approved by the Delhi Police. Sidhana, who has been involved in the farmer protest for some time, has been winding up the younger crowd.

Rajewal said Pannu and Pandher were insistent on taking the tractors to the Ring Road, which was the original plan announced by farmer unions. Both had criticised the Samyukta Kisan Morcha for changing the plan and agreeing to the route suggested by the Delhi Police. Pannu led his group from the Singhu border at 9am and egged on his supporters to break barricades. They clashed with the police at Sanjay Gandhi Transport Nagar and moved on the Ring Road towards the Red Fort.

Meanwhile, the farmer group protesting at the Ghazipur border, led by Rakesh Tikait’s organisation, also turned towards the Ring Road and reached ITO, where the police stopped them from moving to the Rajpath. The rampaging tractors were then diverted towards Daryaganj, which leads to the Red Fort. At the Red Fort, which is close to Gurudwara Sis Ganj Sahib, many locals joined the rally. 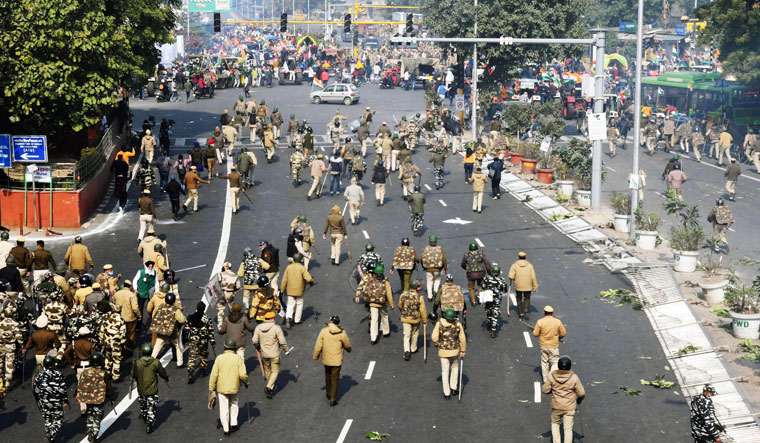 Khaki block: Police chase away protesters as they march towards the capital | Aayush Goel

The unfurling of the Nishan Sahib at the Red Fort has cultural and religious significance. In 1783, Sikh commander Baba Baghel Singh, along with Jassa Singh Ahluwalia and Jassa Singh Ramgarhia, seized control of the Red Fort from Mughal emperor Shah Alam-II and hoisted the Nishan Sahib. The event has been commemorated as Delhi Fateh Diwas. Baghel’s heroics had led to several places like Tis Hazari, Mithai Pul and Mori Gate in Delhi being named after his army’s success. He was instrumental in getting recognition for several historic gurudwaras in Delhi—Sis Ganj, Rakab Ganj Sahib, Bangla Sahib, Mata Gujri, Moti Bagh, Majnu Ka Tila—commemorating the events associated with the Sikh gurus’ lives.

Rumours had been doing rounds in Punjab villages about going to the Red Fort. The matter was further precipitated when Sikhs for Justice, a banned organisation, announced a reward of $2,50,000 (about 01.8 crore) for anyone hoisting the Khalistan flag at the Red Fort. Farmer leaders had warned about this narrative gaining ground.

Rajewal said police deliberately diverted the protesters to the Ring Road. “It was a conspiracy,” he said. He had earlier warned farmers coming to Delhi with the intention of storming the capital and cautioned them against modifying their tractors to resemble ‘tanks’. Many tractors had installed bull bars that helped them ram through the barricades.

Union Minister for Information and Broadcasting Prakash Javadekar, however, said it was a conspiracy to defame the government. “It is a case of pot calling kettle black. The protests were politically motivated. The government engaged with farmers for two months, yet the Congress instigated them to not accept the solution. All those who lost elections have aligned to target Modi,” he said.

There is a fear that the police will now crack down on them. Two farmer bodies, Rashtriya Kisan Mazdoor Sangathan and Bhartiya Kisan Union (Bhanu), have announced their withdrawal from the agitation citing the violence. These bodies were not part of the Samyukta Kisan Morcha.

The unions will now have to fight hard to earn the trust of the farmers back as well. Though they have decided to stick around till their demands are met, the next few weeks will be crucial. As many leaders have been booked for violence, the police and the government can stop engaging with the unions if they go on to announce their next course of action. The government is also likely to file an affidavit in the Supreme Court on the Khalistani elements in the movement, as the apex court had asked in its previous hearing.

“It was a political conspiracy to bring disrepute to the country on Republic Day,” said BJP spokesperson Iqbal Singh Lalpura. “What happened on January 26 was pre-planned where people like Sidhu, Sidhana, Pannu and Pandher tried to disturb peace. The farmer union leaders are complicit in it. They cannot disown them, as these people were allowed to use their stage. This protest will fizzle out now.”

The government is likely to continue to discredit the unions and their intentions. The government’s stance has been to isolate the protesters saying they belonged to one state, and only Agriculture Minister Narendra Singh Tomar engaged with them over 11 meetings. What the unions wanted was a message from the prime minister. However, as the government stuck to its stand of no repeal of farm laws, the Samyukta Kisan Morcha, too, maintained a firm stance.

There was a feeling in the ruling dispensation that the protests had become the rallying point for everyone who was against Modi, and they were trying to put pressure on the government. The Modi government had blinked only twice before—on the land acquisition bill and the amendments in the SC/ST Act. In the case of the land acquisition bill, Modi, through his Mann Ki Baat radio programme in August 2015, assured that the government would not renew the ordinance. In the SC/ST (Prevention of Atrocities) Act, the cabinet approved amendments that overturned an apex court ruling that seemed to have diluted the original act.

In the case of the three agriculture bills in question, the government has been dealing with the issue with the intention of tiring out the protestors. Many senior leaders of the BJP had alleged that the agitation had been hijacked by anti-nationals, Khalistanis and naxals. “The government had engaged with the farmers. The laws were brought after due process as discussions had been on for the last 20 years. It was proposed by the NITI Ayog, the Congress and leaders like [NCP president] Sharad Pawar. Consultations were held with the CMs also. The farmers have been misguided,” said Lalpura. 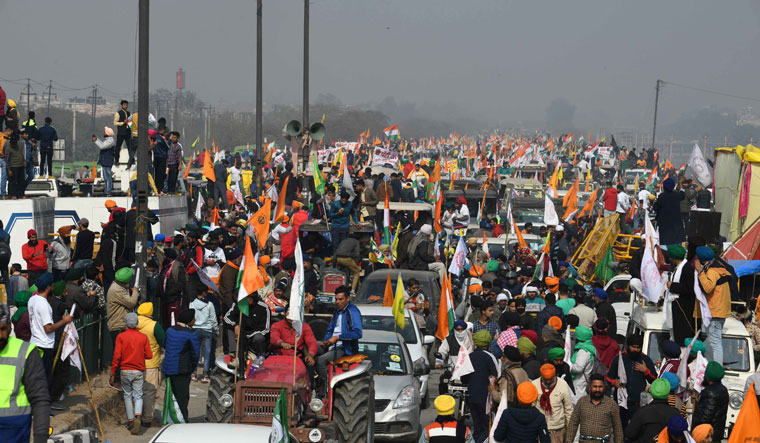 Anger moves in: With the tractor rally turning violent, the farmer protest has been badly hit | Sanjay Ahlawat

What has changed on January 26 was the use of the Nishan Sahib. The government is treading cautiously as to not hurt the sentiments of the Sikhs on this issue. Senior ministers and leaders have maintained silence on the hoisting of the religious flag, as it does not want to alienate the minority community in a border state like the Congress did after 1984. This was probably the reason the police were asked not to fire at the violent protesters.

The assembly elections in Punjab and Uttar Pradesh are due in 2022, and the government would like to find a solution before that so that the emotive issue does not linger on.

However, the government’s image has taken a beating as it failed to control violence in the heart of the capital and prevent the siege of the Red Fort. The opposition parties have accused the government of cancelling the winter session of Parliament to avoid discussion on the agitation. These parties have remained on the margins of this movement, but now they are up to counter the government.

The violence on January 26 is likely to mark a turning point in the farmers’ agitation. A lot will depend on how the union leaders regain the confidence of the farmers and stand their ground. But their goal of repealing the farm laws seems to have been pushed further away, at least for now. As the harvest of the wheat crop is due in April, farmers will be under pressure to return.

The agitation is going through a crucial test. It remains to be seen if it will pass.