Opposition will have to tread cautiously to corner the government 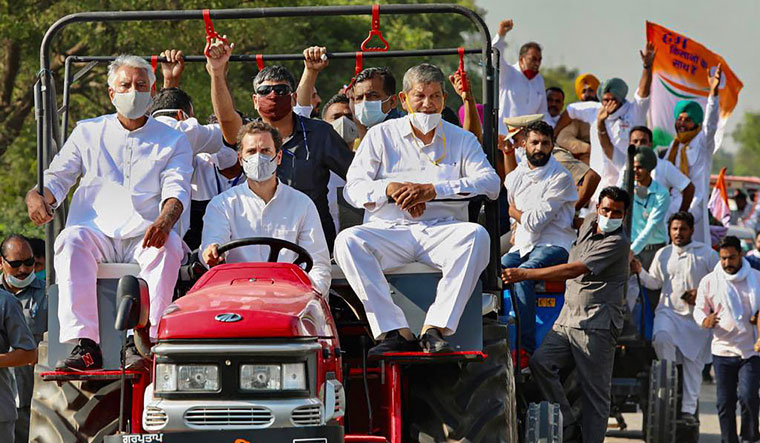 Bumpy ride ahead: Rahul Gandhi with senior Congress leaders during the Congress’s Kheti Bachao tractor rally against the farm laws in Patiala | PTI

With the Union government failing to reach an agreement with protesting farmers even after nearly a dozen rounds of discussions, the opposition parties had been looking to expand their role in the campaign—from cheerleaders to active political agitators. This was evident from how Congress leader Rahul Gandhi led his party’s all-out attack against the Narendra Modi government, accusing it of trying to “put the farming sector into the pockets” of a few industrial houses through controversial laws. Sharad Pawar, Rahul’s ally and former Union agriculture minister, addressed a huge gathering of farmers in Mumbai, where he criticised the Centre for not paying heed to their concerns.

Emphasising the non-violent nature of the farmer agitation, the opposition parties had described it as “satyagraha”. They had hoped that the protests would prove to be the Modi government’s ‘India Against Corruption’ moment. Parallels were drawn between the farmer unrest and the Anna Hazare-led anti-corruption movement, which led to the fall of the Congress-led United Progressive Alliance government in 2014. Just as in Hazare’s campaign, public sentiment appeared to be in favour of the farmers. Their demands resonated on social media, and the agitation received endorsements from celebrities and politicians, even though the farmers kept the latter at arm’s length.

Then came the mayhem on Republic Day. A large number of protesting farmers deviated from the agreed upon route for their tractor rally, entered the heart of the capital, clashed with the police, stormed the iconic Red Fort and hoisted the Nishan Sahib, the flag of the Sikh community. It forced the opposition to step back and adopt a guarded stance.

Opposition leaders soon recalibrated their stand. Rahul spoke about violence not being a solution to any problem, while Pawar said acts of violence cannot be condoned. West Bengal Chief Minister Mamata Banerjee said she was “deeply disturbed by the worrying and painful developments that have unfolded on the streets of Delhi”, and held the Centre’s “insensitive attitude and indifference” responsible for the situation. CPI(M) general secretary Sitaram Yechury said violence was unacceptable, and accused the government of having run a smear campaign against the farmers.

The Aam Aadmi Party had aggressively supported the farmers’ cause; Arvind Kejriwal was the only chief minister to visit the Singhu border, the epicentre of the protest. The AAP, too, said that the violence had weakened the movement, but it criticised the Modi government for allowing the situation to deteriorate. “It is a matter of great concern that the Modi government allowed the situation to deteriorate to such an extent that the kisan and the jawan of this country clashed with each other,” said Raghav Chadha, one of the in-charges of the party’s Punjab unit.

The carefully worded reactions from opposition leaders sought to condemn the violence and criticise the Modi government for failing to assuage the concerns of the farmers and prevent the situation from spiralling out of control. The parties realise the big challenge now: to keep the focus on the core demand of the repeal of the three farm laws passed last September.

The debate is now expected to deviate from demands of the farmers to the members of the agitation. There is also the question of whether the farmer leadership that has so far engaged with the government could even be considered as the rightful representative of the protesters, since it failed to control them. It is also felt that, if the focus veers to the radical voices among the agitators, it would be difficult for the opposition to sympathise with their cause.

“A big concern is that those who have extremist views might gain prominence, and there will be the threat of the agitation falling into the hands of those who have extreme views. It might go out of the control of leaders who have moderate ideas,” said Congress leader Ajay Maken.

Opposition parties had begun discussions for a coordinated approach to corner the Modi government in the upcoming budget session of Parliament. The plan was to highlight the government’s alleged insensitivity to the farmers, who have been braving intense cold to continue their protest. The developments of January 26 have made the task of the opposition even more challenging.

Opposition parties believe that the violent incidents have robbed the agitation of its record of being a peaceful and non-communal campaign. It is felt that the visuals of farmers clashing with policemen, and of hundreds of them storming the Red Fort, would give the government an opportunity to question the nationalistic credentials of the agitators and claim that there are elements among them that are inimical to India. The parties feel that the government would seek to highlight these aspects in Parliament and raise questions about their support to the agitators to counter opposition attacks. The government has already tried to project the protests as being politically motivated and accused the opposition of “misleading” the farmers.

The farm unrest, the opposition fears, could now be demonised by the Modi government. Some BJP leaders have already claimed that the protest had a Khalistani aspect to it and that it had the support of left extremist groups.

“It is often seen that miscreants create problems and attempts are made to delegitimise andolans,” said Rajya Sabha member Manoj Kumar Jha of the Rashtriya Janata Dal. “Suddenly, all important issues that were being raised have now faded into the background. For more than 60 days, in extremely cold weather, the farmers have been observing a sit-in. They have not asked for the moon, but the government is being obstinate and has shown extreme lack of sensitivity. I feel that what has happened is wrong; but for that, you cannot demonise the entire andolan.”

In a bid to counter the BJP’s attacks, opposition parties have claimed that persons close to the saffron party were involved in the violence on January 26. The Congress and the AAP said actor Deep Sidhu and farmer leader Amrik Singh were associated with the BJP. They have accused the BJP of trying to defame the agitation by helping “certain elements” infiltrate the campaign.

Randeep Surjewala, who is in charge of communications in the Congress, demanded that Union Home Minister Amit Shah be dismissed. He said the government had aided and abetted a conspiracy to malign the farmer protests. “A set of people with a pre-meditated motive of violence was permitted to enter the Red Fort, climb on to its columns and put a flag there,” he said. “This is sacrilege. This is unacceptable.”

According to Surjewala, first information reports were hastily registered against farmers to drown out the demand for the repeal of the laws. “Farmer leaders who had nothing to do with acts of violence have been named in FIRs,” said Chadha, “but the police have not taken any action against agents of the BJP.”

Be that as it may, the pitch has now queered for the opposition, forcing it to tread cautiously.