Violence was a failure on the part of Police & Intelligence agencies 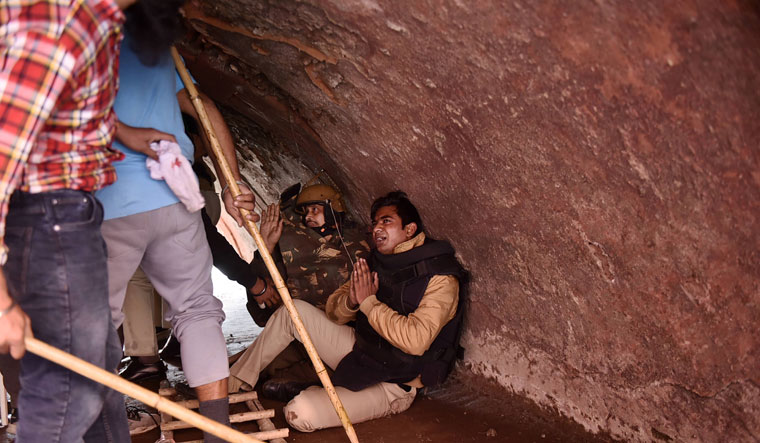 Ritu, 24, a constable with the Delhi Police, was on duty at the Republic Day parade when she was ordered to rush to the Red Fort. The colourful tableaux showcasing a unique blend of cultural heritage and military might were passing by when Ritu joined constable Rekha and assistant sub-inspectors Joginder Raj and Pradeep in the police control room (PCR) van heading to the Red Fort. A mob, demanding a repeal of the new farm laws, had laid siege on the historic seat of imperial power, breaking barricades and unleashing violence along the way.

Prime Minister Narendra Modi had unfurled the national flag from the ramparts of the Red Fort to celebrate the historic day. But when Ritu and her team arrived a few hours later, it had become a battleground for thousands of men and women brandishing sticks and sharp instruments. The call of duty demanded that they enter the premises.

To their horror, the constabulary at the site had been outnumbered by then and the frenzied mob was rushing out after hoisting orange and yellow flags, ostensible symbols of Sikhism, below the national flag.

An iron railing flanks the passage to the ramparts of the Red Fort, across the 15 to 20ft moat. As Ritu made her way in, the railing toppled on to her in the stampede, injuring her in the stomach. Rekha, who recently had a child, got her feet stuck under the railing. Soon, policemen started jumping into the moats to avoid being injured by the mob. The two women constables, however, could not scurry for shelter.

Speaking to THE WEEK, assistant sub-inspector Joginder Raj recalled that when the mob swarmed out of the tent like bees, some of them tried to attack the women constables. However, they were stopped by two or three turbaned Sikhs who said there was no need for such mindless violence.

“The sardars helped the women to their feet,” he said, “and prevented the mob from attacking them. Then the women constables were taken to a nearby school, before the PCR was called to take them to Tirath Ram hospital.” 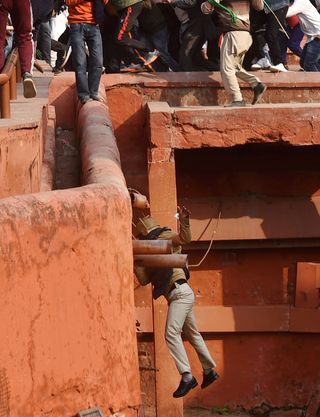 Failure to protect: A policeman falls from a rampart of the Red Fort during the clash with protesters | PTI

Ritu, Rekha and Joginder are among the 394 injured police personnel who became collateral damage of a political deadlock between the Centre and farmer unions from Punjab, Haryana, Uttar Pradesh and other states.

The agitation is more than 60 days and a dozen intelligence reports old. Inputs generated by intelligence and law enforcement agencies have been warning of potential violence, vandalism and infiltration of anti-national elements, Khalistani groups and even Maoist elements into the farmers’ agitation since September 2020. But it seems these reports gathered dust on desks at Raisina Hill, while political leaders held consultations with the protesting leaders over the nuances of the proposed law.

One such report noted: “Sikhs for Justice legal adviser and radical Khalistani terrorist Gurpatwant Singh Pannun was trying to capitalise on farmers’ sentiments to occupy Delhi and spread an anarchist movement in the capital….” Pannun had earlier called for a “Modi gherao” rally, urging truck drivers from Punjab, Haryana, Uttar Pradesh and Rajasthan to reach Delhi in September. Luring farmers through a video message to indulge in anarchy for monetary gains, Pannun announced he would distribute $1 million among indebted farmers in Punjab and Haryana. In the months following up to the storming of the Red Fort, intelligence agencies and the Delhi Police were alert to online and offline banned outfits and leaders, front organisations and sympathisers being mobilised as part of the conspiracy.

However, the fresh violence in Delhi cannot be dismissed as a stray incident as it follows a series of violent anti-Citizenship (Amendment) Act protests at the start of 2020, followed by the communal riots in Delhi that claimed more than 50 lives, bringing embarrassment to the government and raising a big question mark on the performance of the Delhi Police.

In February 2020, the Union home ministry appointed S.N. Srivastava as the Delhi Police commissioner. His appointment came as an urgent measure during the riots. He is now heading to the end of his tenure with superannuation due in late June. Srivastava may be given an extension of tenure or a new face could be brought in, but the complexities of the performance of the Delhi Police stretch beyond policing or bureaucratic delays this time. What also becomes clear is that neither protesters nor protest marches go by the rulebook.

The failure to stop protesters from storming the Red Fort is not the fault of the police alone, but also raises questions about the strategy adopted by the ministry of home affairs (MHA) in preventing the situation from spiralling out of control.

“The home ministry has an important role to play when it comes to law and order in the capital,” said former home secretary G.K. Pillai. “It has special powers to handle national security and law-and-order matters in the national capital.”

The MHA had regularly been briefed by various police forces, including the Intelligence Bureau, about those trying to take advantage of the protests. The MHA was of the view that all such elements would be dealt with with an iron hand. The message down the line was clear that as long as the protests were peaceful, the protesting farmers would be allowed to enter Delhi, but if there was violence in any form, the police would be free to take steps to maintain the law and order.

“The old strategy of trying to tire out the protesters seems to have failed miserably this time,” said a top security official. “The protests might have been discredited, but what we also saw was the creation of a faceless and nameless mob, which is even more dangerous to stop.”

The Delhi Police had first refused to allow the protesters entry into Delhi, limiting their movement to the Western Peripheral Expressway, aka the Kundli-Manesar-Palwal expressway. But the final decision to allow them into the capital was taken a few days ahead of January 26. This is when the Delhi Police started making preparations based on its negotiations with farm leaders and representatives of police forces of neighbouring states. The agreement also stated that around 5,000 protesters would be allowed entry. However, the protestors not only entered Delhi before the stipulated hour, but also tripled in number when they breached the borders. The complete failure of law and order became evident when the protesters finally outnumbered the policemen at the Red Fort. The swelling crowds waved flags and dominated the area, resulting in the police withdrawing from stringent action to avoid bloodshed. Instead, the police tried to cordon off the area where protesters were climbing up the pole of the national flag. They did not fire tear gas shells nor lathi-charge anybody on the premises. However, there were violent clashes at other locations in Delhi.

“We had regular intelligence inputs and that is how we have detected 308 Twitter handles from Pakistan that were used to provoke and incite unrest,” said Srivastava. However, the commissioner said that the Delhi Police trusted the agreement signed with the protesting farmer union leaders and exercised maximum restraint in handling the situation to avoid casualties.

“The kisan leaders breached the agreement and legal action will be taken against them,” said Srivastava. He said 19 accused have been arrested and 50 detained. Questioning of the accused is going on. At least 22 cases have been registered for attempt to murder, rioting, damaging public property and a separate case to investigate the main conspiracy will be registered. The National Investigation Agency is already probing terror links of the banned outfits to some of those participating in the farmers’ protests and the Enforcement Directorate is likely to step in to probe money laundering cases against the accused.

The reaction by the Delhi Police appears to be too little too late with the damage already done. The hapless police force continues to be caught between a rock and a hard place as the government is yet to finalise its position on the farm laws. What also remains to be seen is whether the Delhi Police and investigating agencies will be able to save face with a robust and fair investigation.