Space, as a commodity and concept, seems elusive to most Indians. Many of us simply cannot afford to have or give space. Just picture a Mumbai local train during peak hours. A few, however, do not quite get the concept. Like our dear prime minister, whose hugs seem neither warm nor welcome. Way to disarm world leaders though! His “friend” in the United States would shake on it. Vigorously.

Hugs and handshakes are now forbidden (hallelujah, anyone?). All thanks to a virus that does not respect space or seek consent. No wonder it liked our company, especially that of men in India. Before you go #notallmen on me, statistics say so. Of course, official data is hard to come by in our country. The last available nationwide gender-based data showed that 76 per cent of Covid-19 patients were male—then the highest among the countries that released such information. The gender gap seems to have narrowed down (no one is going to buy your #TheGreatEqualiser pitch, patriarchy). And as we have always dealt with issues of consent, we decided to cover up and isolate the ‘victim’­—in this case, the whole of humanity. Only, unlike victims of abuse, we were not entirely blameless here. And, the precautions were truly meant to protect us and not subjugate the ‘weaker’ species.

Meanwhile, the virus, like most predators, roamed free. For months, our movements were restricted. We stepped out of our concrete boxes, only to step into chalked-out circles. But where is the fun in staying within the lines, eh? We flouted the norms at the drop of a mask, say, for faith (Ganesh Chaturthi and Durga Puja celebrations *shakes head*), even blind faith (the clap-and-clang processions *facepalms*) or football (the I-League trophy parade by Mohun Bagan fans *rolls eyes*). But trust us Indians to ignore our own inefficiencies and fallacies to judge others. Even as we struggled to maintain physical distance, the sheltered snoots among us derided migrants for marching home. “Look who’s walking,” we tsk-tsked, peering out of our bay windows. “Didn’t they get the lockdown memo?” We have internalised that sort of distancing quite effortlessly, no? 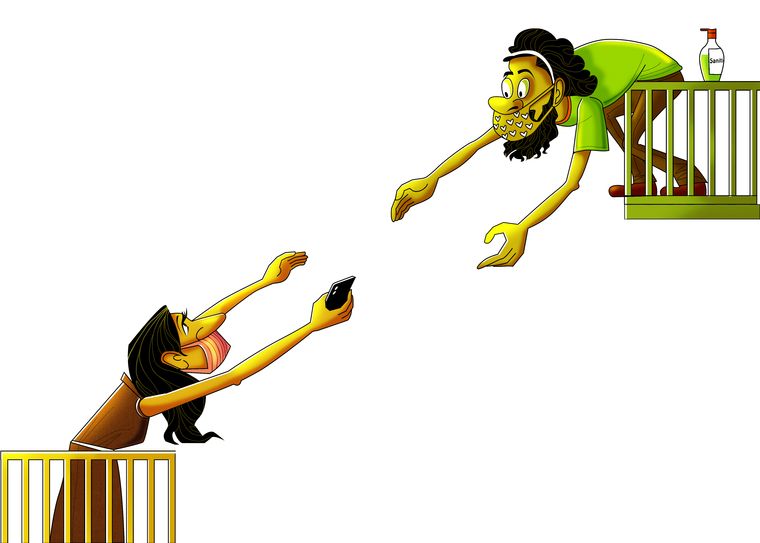 Our disconnect with social reality, however, precedes the pandemic. We were anyway more in touch with our screens than with each other. But that turned out to be a blessing in disguise. Shut inside our homes, we ‘checked in’ on each other more often. Video calls became frequent, elaborate and creative. A young writer put up a video on Instagram of her parents hosting antakshari on calls with friends every evening. Another writer in the US started a Corona Community Chorus, a sing-along party on social media. And this call for connection was not just digital; it was live, too. Remember Italians making music on their balconies? (No, banging pots and pans from your balconies is not the same thing—neither were they music to anyone’s ears nor did their “vibration reduce the potency of the virus”. And the less said about the ‘Go Corona… Corona Go’ chant the better.)

Music did strike a universal chord. It brought us closer in ways only music can. But it also amplified the absence of direct contact, bringing back memories of a not-so-distant past. Like, slow-dancing with your partner to your favourite song at someone else’s wedding. Or, dissing a horrible remix of a perfectly ‘humma’ble A.R. Rahman original with your friend as it played on loop at the diner you met after work. That was so 2019 though.

At home, too, we hesitate, turning into touch-me-nots in the presence of our loved ones, especially the elderly. We do not embrace them enough; it is touch—a quick caress or peck on the cheek—and go. And science (the medical one, not the one that ‘proves’ why coffee should not be your cup of tea) says that physical touch is important for our well-being. It helps increase the levels of hormones—serotonin, dopamine and oxytocin—that induce happiness and human bonding. And, it works wonders in infants and the elderly.

There is a video of a couple in the US—the Wildreds—who meet after months because of Covid-19 restrictions and cannot stop kissing and hugging each other. Jean, 89, on seeing Walter, 91, says, “Oh, I am happy to see you.” A statement they keep repeating to each other through their conversation, all the while holding hands. Later she asks him if he is feeling alright, and Walter replies, “I am feeling better now.”

If Covid-19 is here to stay, so are the safety protocols. But contact is key even in these Covid times. So, go hug your loved ones, especially your grandparents. They will welcome you with open arms and hearts, and that will be the warmest hug you will ever receive. Trump that, Modiji!

Even the best of us have fallen for the gyaan peddled by the world-famous WhatsApp, Twitter and Facebook (WTF!) University. A day after the nation observed Janta Curfew on March 22, actor Amitabh Bachchan tweeted, “An opinion given: 5 PM, 22nd Mar, ‘amavasya’, darkest day of month; virus, bacteria evil force at max potential & power! Clapping shankh vibrations reduce/destroy virus potency Moon passing to new ‘nakshatra’ Revati. Cumulative vibration betters blood circulation.” That tweet made the Twitterati’s blood boil, and they lashed out at him. To his credit, he deleted the tweet. We are all unlearning, too, are we not?