Tensions between India and China are far from over 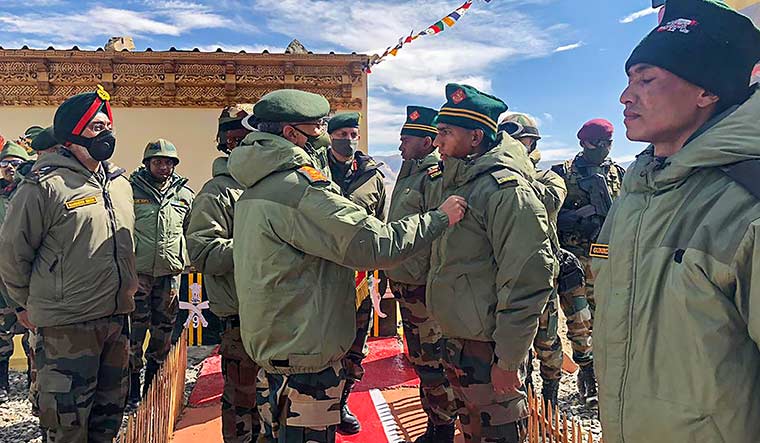 The Chandigarh Air Force Station has been busy. The Indian Air Force’s heavy lift strategic aircraft—C-17 Globemaster and IL-76—have been busy ferrying tanks and other armour designated for forward areas in Ladakh. Military observers said that such urgent movement to Ladakh is a first since 1962. China, too, has pumped up its forces by at least 30 per cent since the clash on June 15,said a military observer.

Defence Minister Rajnath Singh, who went to Moscow to take part in the 75th Victory Day Parade, pressed his Russian counterpart General Sergei Shoigu for urgent supply of spares for Sukhoi Su-30MKI and MiG-29 fighters, T-90 main battle tanks and Kilo-class submarines. (More than 60 per cent of India’s weapon systems are of Russian origin.) The purchase of 21 MiG-29s and 12 Su-30MKIs is under consideration to fill gaps in India’s air combat capabilities.

Observers said the Chinese aggression in Galwan valley was the brainchild of General Zhao Zongqi, head of the People’s Liberation Army’s Western Theatre Command. Zhao, who had also planned the Doklam intrusion in 2017, is believed to have “planned the standoff” in the early months of 2020 and tasked units in the Xinjiang military district to take on Indian patrols on the northern bank of the Pangong Tso, and at Galwan, Hot Springs and Depsang Plains. Experts said that he chose Galwan valley to escalate as it was a “settled place” where Indian forces would not anticipate action, but was surprised by “mirror deployment” by India in eastern Ladakh.

The Army has dispatched additional brigades to forward positions along the 826km-long front of the Line of Actual Control in Ladakh and beefed up firepower with the equipment that was flown in. It already had three armoured regiments in Ladakh. The Indo-Tibetan Border Police has deployed 40 additional companies along the LAC. The Army has also moved at least two peace-time divisions from Himachal Pradesh and Uttar Pradesh towards Ladakh, along with two engineer regiments. However, new troops would need to acclimatise to high-altitude warfare.

The IAF has deployed Su-30 MKIs, MiG-29s and Apache attack helicopters to carry out combat air patrol. Air Chief Marshal R.K.S. Bhadauria made a secret visit to Leh last week. Air assets were deployed after additional fighter jets, bombers and attack helicopters were noticed at four Chinese bases close to the LAC. Animal transport units, which played a crucial role in the Kargil War, have been reactivated to supply weapons and ammunition to areas without motorable roads, including remote outposts at heights of up to 19,000ft.

The PLA has an armoured division (three brigades) and two motorised infantry divisions close to Ladakh. An Indian official said China also has two armoured brigades and four motorised infantry divisions in Chengdu. After the Galwan valley clash, on the insistence of Prime Minister Narendra Modi, the Army’s rules of engagement along the LAC were amended; field commanders can now sanction the use of firearms in “extraordinary” circumstances.

Frank O’Donnell, non-resident fellow, South Asia Program, Stimson Center, the US, said that India’s defence position was more secure with adequate dispersal across land, air and sea. He told THE WEEK that India also has more and better aircraft along the border, more experienced air crew, and a large number of airfields in the east and west. “So even if some airfields are down, operations can continue from other locations,” he said. O’Donnell said that in the event of war, China would opt for early long-range missile strikes against Indian air bases, but added that a daunting number of Chinese missiles would be required to incapacitate relevant Indian air bases.

Despite the strong preparations, Pangong Tso continues to be a concern for India. The lake is divided into eight fingers—ridges jutting into the lake. In the past, India had claimed territory till the easternmost ridge, Finger 8. But, gradually, both sides agreed on India controlling fingers one to four and China, five to eight. But India has its last post close to Finger 3. Lt Gen D.S. Hooda, former head of the Army’s Northern Command, said that in the last six weeks, when the focus was on Galwan valley, the PLA is learnt to have built permanent structures and roads up to the areas between Fingers 4 and 8. Intelligence inputs based on satellite images said that the PLA now holds the entire Finger 4, almost 5km inside Indian territory.

A build-up of Chinese forces can also be seen at Depsang Plains, north of Galwan valley. But O’Donnell said: “Despite the apparent numerical parity of ground forces, Indian forces are all permanently close to the border, limiting prospects of a successful Chinese cross-border advance.”

He said that even in a war with India, a significant proportion of Chinese ground forces would be unavailable, reserved either for taskings on the Russian border or for countering insurrection in Xinjiang and Tibet. Moreover, the majority of forces are located further from the Indian border, in contrast with the majority of forward-deployed Indian forces, which have a focused “China defence” mission.

While the military is determined and prepared to tackle Chinese aggression, questions have been raised about intelligence failure in detecting the massive build-up of Chinese forces on the border sooner. A military intelligence officer said that India does not have enough dedicated military satellites. “To have round-the-clock coverage on the China border, especially in our areas of interest, we require at least 10 dedicated satellites,” he said. “Moreover, Indian satellites are controlled by NTRO (National Technical Research Organisation) and ISRO scientists, who do not understand military requirements.” An intelligence analyst claimed that India’s focus has always been on Pakistan; China was never a priority. It certainly is now.