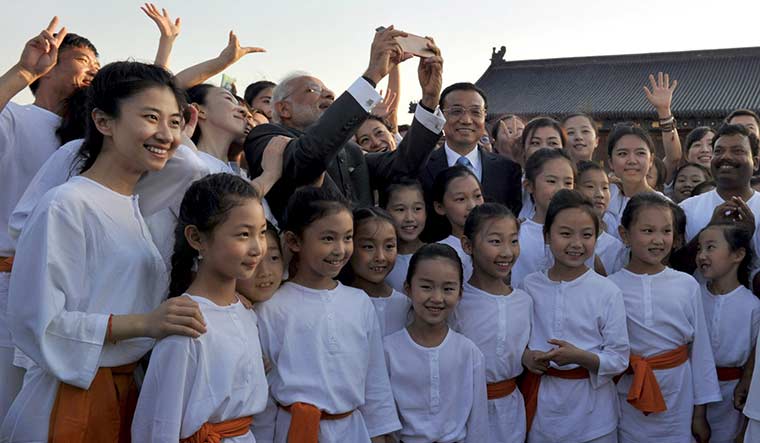 Picture imperfect: Narendra Modi and China’s Premier Li Keqiang take a selfie with children during a tai chi and yoga event in Beijing in 2015 | Reuters

In the summer of 2015, Narendra Modi—on his first visit to China after he became prime minister—deviated from his script while addressing students of Tsinghua University to make a grand gesture offering e-visa to Chinese tourists. The gift was not on the list of 24 agreements, and security agencies had warned against it. It even caught Chinese foreign minister Wang Yi by surprise, and he urged students to cheer once again for Modi to thank him for the gift.

Five summers on, after 20 Indian soldiers were killed in a clash with the Chinese at Galwan Valley, Modi’s closing remarks at the all-party meeting offered China another advantage, claims the opposition. “No one has intruded and nor is anyone intruding, nor has any post been captured by someone,” he said, contradicting the official position of the Army and the ministry of external affairs. The statement, said former prime minister Manmohan Singh, allows the Chinese “to use his words as a vindication of their position”.

The Prime Minister’s Office rushed to clarify Modi’s statement a day later, claiming that his observation of “no Chinese presence on our side of the LAC pertained to the situation as a consequence of the bravery of our armed forces”. However, the confusion has only helped bolster the Chinese confidence and their claims.

“This has been an absolutely shocking coup of sorts by China,” says Alka Acharya, professor, Centre for East Asian Studies, School of International Studies, Jawaharlal Nehru University. “They are unlikely to retreat from the territory they now occupy. It is a crucial part of the overall strategic advantage for China in that area. It remains to be seen what kind of a spin will be given to make it more palatable for India.”

Both sides may be now willing to de-escalate—another word that experts believe suggests that India is on the back foot. But the negotiations for peace at Galwan Valley, the bloodiest episode since 1967, and the fallout on the relationship presents the biggest challenge for Modi. It could not have come at a worse time—there is the war against a pandemic and a looming economic crisis.

Unlike his predecessors, Modi came to power convinced of furthering warmer ties with China. He wanted to move beyond 1962 to define India and China through an economic prism, courtesy his experience as chief minister. The e-visa was his attempt to demonstrate India’s closeness with China. All the imagery with Xi Jinping, from Modi’s first visit to China to Xi’s 2019 visit to Mamallapuram, has been proof of personal chemistry and a special bond.

“The policy has been a failure,” says Rajesh Rajagopalan, professor, Centre for International Politics, Organization and Disarmament, School of International Studies, JNU, referring to the personalisation of the relationship. “It was foolish, and he [Modi] is partly paying the price for that. I don’t see, diplomatically, where he goes from here. But at the same time, he can’t completely afford to break with China.”

The face-off at Doklam in 2017 might have exposed China’s intentions, but the Galwan Valley incident has revealed the full force of China’s ambition. “New Delhi is under tremendous pressure to retaliate for the 20 Indian soldiers that lost their lives, and a nationalist like Modi could suffer a political blow if he just shrugs everything off. But at the same time, India is in a tough spot,” said Michael Kugelman, deputy director of the Asia Program and senior associate for South Asia at the Wilson Center. “It has relatively few military options, and any punitive economic measures it implements against Beijing could end up hurting India’s economy more than China’s.”

For now, India can take a tough line in negotiations, says Kugelman. “Beijing won’t back down either. So what we are looking at in the coming days and possibly weeks are continued talks, but talks that don’t lead to a resolution,” Kugelman says. “And the longer the talks go without a resolution, the more the chances increase for more provocations and escalations. So the two sides are far from being out of the woods. And even when they get out of the woods, the next crisis won’t be far away.”

This then lies at the heart of the problem. And, the border dispute, which had remained dormant for years, is at the front, centre and looming. That the Line of Actual Control has had different interpretations for both sides is now evident. As are the implications of living with the fuzziness. “Even if China agrees and restores status quo ante, one thing is now clear—the old agreements are no longer enough to restore peace and tranquillity on the border,” says Rakesh Sood, distinguished fellow at the Observer Research Foundation. “The 1988 modus vivendi [when Rajiv Gandhi visited China] is no longer tenable.”

The existing tools in the diplomatic toolbox do not work. And summits, even formal ones, will not work. A win—with all the optics that Modi is known for—will require Houdini-like skill. Continuation of the policy towards China as it exists will not be effective. “The Indian government needs to start afresh in terms of how it visualises its relationship with China in the coming decades,” says Sood. “It has to create a new policy consensus by taking people into confidence.”

Reaching out across the aisle for support is not Modi’s strength. Will he be willing to do it? To make it truly effective, India might need to re-evaluate its relationship with its neighbours. “The economic boycott of China will be only feasible if it is in concert with others,” says Rajagopalan. And in building consensus outside—much easier for Modi than domestic unity—India may need to reach out even to Pakistan. “By rejecting any semblance of a dialogue, we have reduced leverage,” says Sood. “Is it strategically wise to have a Pakistan-China dynamic? We should not be deluded that we would somehow wean Pakistan off China. But diplomacy is about creating perception.”