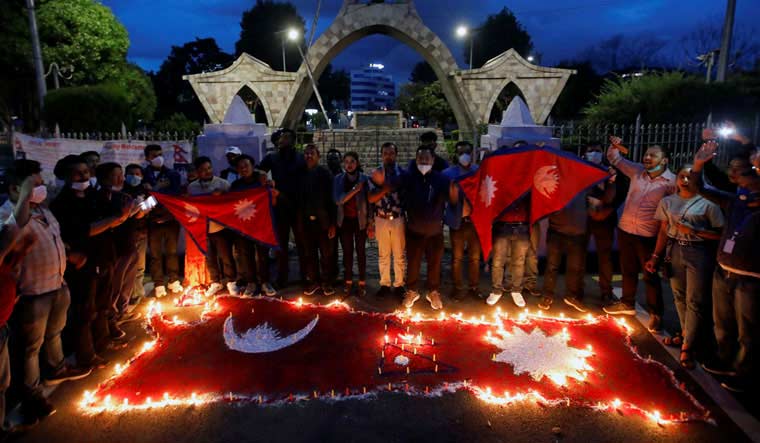 Clap for the map: Nepalese people in Kathmandu light candles in celebration of their parliament’s approval of a new map | Reuters

On June 13, Nepal’s parliament amended its constitution and ratified a new map of the country, which shows around 335sqkm of Indian territory as being part of Nepal. The bold bill was passed nearly unanimously, and it brought together parties as divergent as the ruling communists, the opposition Congress, and groups representing the Mhadesi community.

The legislation was a knee-jerk reaction to India opening a new road to Kailash Mansarovar through the Kalapani valley, a region whose ownership has for long been a matter of dispute between the two neighbours.

Certain recent events may also have spurred Nepal into action. Last November, India released its new map after the abrogation of Article 370. While the map did not alter international boundaries, China objected to designating Ladakh as a Union territory. It said there were disputes between the two countries in the region, and that India’s move affected China’s sovereignty. Nepal, too, objected to showing the Kalapani valley as Indian territory. It sent three notes last year to the Indian ambassador in Kathmandu and the government of India, proposing foreign secretary-level talks to resolve issues.

The matter went to the backburner as Covid-19 became a pandemic. The road inauguration in March, however, changed the situation. The haste with which Nepal drew up and ratified the new map has raised eyebrows. “Nepal raises the border issue usually when it wants to create an anti-India sentiment to divert public attention from [domestic] political troubles. It doesn’t raise the issue during prime minister-level talks,” said Ranjit Rae, former Indian ambassador to Kathmandu.

Sarita Giri, a member of parliament who opposed the new map saying it was not supported by historical evidence, is now facing expulsion from the Samajbadi Party. Nepal itself has decided to set up a committee of experts to collect historical proof to bolster its claim.

India, though, is confident of the legality of its claim. An 1870 treaty recognised the region as Indian territory. Staking a claim on it after 150 years is absurd, says India.

The increasing Chinese influence in Kathmandu, however, complicates matters. Unlike previous communist leaders in Nepal, Prime Minister K.P.S. Oli makes no bones about his affinity with China. Also, Hou Yanqi, Beijing’s envoy to Kathmandu, is a popular fixture in the city’s social circuit, and she engages with leaders across the political spectrum.

India says it had agreed to foreign secretary-level talks even before the new map was tabled, and that Oli did not share this information with the parliament because of his rush to legislate at any cost. “This is not true,” says Bishnu Rijal, deputy chief of foreign affairs of the Nepal Communist Party. “India has been repeatedly hurting our sentiments. The allegation that China is behind our act is another insult. India should know better about the spirit of nationalism. When Narendra Modi ordered the Balakot strikes, Rahul Gandhi lauded it. For us, the map is a matter of nationalism.”

Nepalese leaders point out that China is actually pro-India on the Kalapani issue, since the two had agreed to a trade route through the region, ignoring Nepal’s claims. The recent killing of an Indian citizen on the border near Sitamarhi in Bihar signals an emboldened Nepal. The killing was a lockdown violation issue that got out of hand, but it came at a difficult time. Nepal is now setting up 500 armed posts along the border, which is famed for its openness.

Oli continues to make anti-India remarks, mocking India’s national emblem and accusing it of exporting the coronavirus. But not everyone in Nepal is buying his rhetoric. “Many of us hadn’t even heard of the Kalapani region,” said S. Dahal (name changed), who works for an international start-up in Kathmandu. “If the government were so keen on the area, why haven’t they invested in its development all these years?”

India says it is waiting for Nepal to create an atmosphere conducive for talks. But Oli may well have tied himself in knots. “Getting the constitution amended to include territory is easy,” said Rae. “But will any leader be able to pass an amendment to restore it to the previous position? This is going to be a constant irritant in bilateral engagement.”

Nepal insists that the map is an “internal matter”. “Since our national emblem has the map of the country, we needed to amend the constitution to include the redrawn map.” said Rijal. “This should not come in the way of talks with India.”

India says it will continue its development work, which includes rebuilding posts destroyed in the 2015 earthquake. India has already given 04.5 crore to Nepal to battle Covid-19, and is willing to give more.

With its ties with China deteriorating, India will have to rethink its engagement with Nepal. New Delhi looks upon Nepal as a small, friendly country. Nepal looks at India as a giant that might swallow it whole. Yet, it does not consider China to be a threat.

It does not help India’s cause that the triumvirate of Prime Minister Modi, Foreign Minister S. Jaishankar and National Security Adviser Ajit Doval is unpopular in Kathmandu. On the other hand, China is keen to see Oli, a master at playing the ultranationalist card against India, complete his term, which ends in 2023. To counter China’s influence in Nepal, India has to step up engagement at every level. And it must do so quickly, too, before every second person in Kathmandu begins speaking fluent Mandarin.