Centre cannot continue to sit on the sidelines 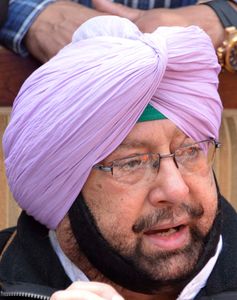 PUNJAB CHIEF MINISTER Captain Amarinder Singh said his state was staring at a massive revenue loss of at least Rs50,000 crore because of Covid-19, even as he criticised the Centre for not being responsive to the state’s demands for an immediate relief package. In an exclusive interview with THE WEEK, the chief minister explained that the recent spurt in Covid-19 infections in Punjab was the result of a major lapse on the part of the Maharashtra government which assured that the pilgrims who returned from Nanded were free from infection. He said from now onwards every person returning to Punjab would be quarantined for 21 days.

Why did you extend curfew for two more weeks?

We have been able to contain the situation largely because we imposed a curfew early, even before the national lockdown. But we felt a further extension was needed to keep the numbers in check, and to give us more time to ramp up testing and scale up isolation and other facilities. Also, we are in the midst of a mega procurement operation, which requires a huge amount of resources, particularly manpower.

It is clear that the pandemic is just beginning to escalate in India, and we could not afford to take risks. While the prolonged lockdown is detrimental to our economy, my priority is to save lives.

Are you confident that the pandemic is under control in Punjab?

The number has gone up of late, largely because of positive cases among those who returned from Nanded. There was a major lapse on the part of the Maharashtra government, which had assured us that three tests on these travellers had shown no infection, but now it seems that the infection had already spread in the gurdwara. With our limited testing capacities, we could not immediately test all of the 3,000-odd pilgrims who came back in one day, along with more than 3,000 labourers and 150-plus students who also returned the same day.

The NRIs and the Tablighi Jamaat attendees were the main cause for trouble in Punjab. And now, the people returning from Nanded. We are expecting the numbers to spike further as migrant labourers and others start coming back. But local infections continue to be low, which has given us some optimism. We have learnt our lesson from the Nanded example, and are not relying on tests conducted by other states. We will quarantine and test every single person coming back.

How will Punjab deal with the huge revenue shortfall?

In this fiscal, we are staring at a loss of a minimum of Rs50,000 crore. Right now, the focus is on ensuring that we utilise our limited resources in the fight against Covid-19, and to meet our basic expenses. We are pressing the Centre for an immediate relief package. We have set up a group of experts headed by noted economist Montek Singh Ahluwalia to work out an economic revival strategy. Former prime minister Dr Manmohan Singh is also guiding us in this exercise. Since the battle appears to be a long-drawn one, any strategy will necessarily have to be dynamic, with short-, medium- and long-term goals.

How responsive has the Centre been to demands by state governments, especially opposition-ruled states?

The Centre has to pitch in. It cannot continue to sit on the sidelines. It’s the states that are fighting the battle from the front. So far the Centre has not been very responsive to our needs and demands, even though I have personally been pursuing the matter with them. The much-needed relief package has not come, nor has the Centre heeded our other requests, such as clearance of the pending GST arrears amounting to Rs 4,365 crore, revenue grant to meet the shortfall, review of the 15th Finance Commission report and bonus for farmers to facilitate staggered procurement.

I don’t know if the Centre’s failure to support us is part of its policy to discriminate against non-BJP states, but given the national problem of unprecedented magnitude, I don’t think the Centre can afford to play politics on this issue.