Is it time for India to take a leadership role and influence global health policies? 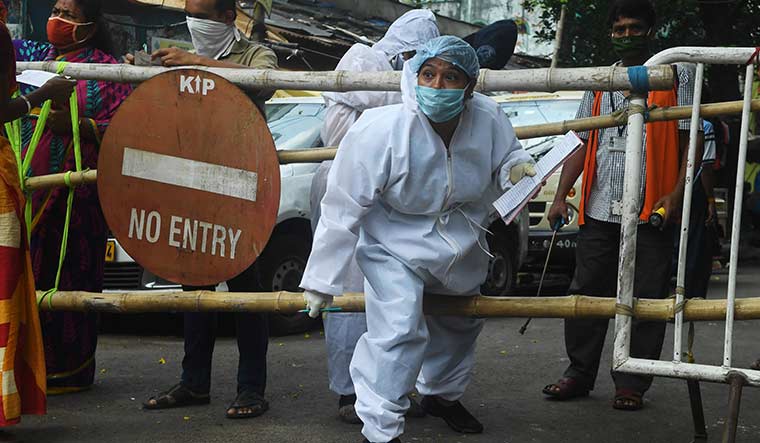 No Barriers: A municipal worker during a door-to-door survey in Kolkata | AFP

THE RELATIONSHIP BETWEEN the World Health Organization and its member countries is a delicate, nuanced one; officials on both sides often walk the tightrope to balance local concerns and a global push, say experts. For a country such as India, with low investment in public health, walking that tightrope can often be tricky. Disagreements often mark the negotiations, but eventually, say those in the know, the differences are resolved.

C.K. Mishra, former health secretary and current environment secretary, told THE WEEK: “The focus is on building consensus. Experts from the WHO’s country office, who provide technical assistance, work with the ministry in making plans. Decisions are not made unilaterally.” In case of a disagreement, the issue is taken up and debated at the World Health Assembly, he added.

Experts who have been part of negotiations between the health ministry and the WHO say that with an advisory body such as the WHO, the core of the tension lies in retaining privileges of being a sovereign nation while also being a member state.

The partnership usually works in tandem, but there has been a slight change during this pandemic. For instance, in his public statements, Union Health Minister Dr Harsh Vardhan has often said that India’s health response to the pandemic has been more proactive than that of the WHO.

In his statement on testing in March, Dr Balram Bhargava, director general of the Indian Council of Medical Research, said that, contrary to the WHO appeal to “test, test, test”, India’s strategy would be to “isolate, isolate, isolate”. However, as Mishra said, India has hugely increased testing in the last few weeks.

Said Dr Rajni Kant Srivastava, senior scientist at ICMR and director, ICMR Regional Medical Research Centre, Gorakhpur: “While they (WHO) set the global advisories, we can modify these based on our requirements. Many of our institutes function as regional collaborating centres with the WHO. ICMR also collaborates with the WHO for malaria research. We are also participating in the WHO’s global Solidarity Trial for drugs. During this pandemic, though, all the strategy has been devised at ICMR. It is our indigenous response based on our needs at a particular time and availability of resources.”

Said an expert who did not wish to be named: “The WHO is perhaps the only agency in the world that serves a normative function, in that it devises guidelines, based on evidence that is gathered from all over the world, synthesised, and then set into a guideline. In the case of an emergency health threat, this becomes tricky. Should they have waited for all the evidence to come in? Is it too early yet? Those questions make it an easy punching bag.”

In India, particularly, the question of evidence and risk assesment, and the eventual outcome, has often become the bone of contention. “During the AIDS epidemic, too, India disagreed with the numbers,” said the expert.

“Of all the United Nations’ agencies, the WHO is the one that works closest with the government,” said J.V.R. Prasada Rao, former Union health secretary, and member of one of the government’s task force on Covid-19 response. “That is why the country office is located inside the ministry, so that co-ordination is facilitated closely. For the most part, the relationship has worked well, especially on polio eradication programme, and even the SARS, H1N1 and Ebola responses. Of course, there have been instances where we have sought their help to move things faster. During the HIV epidemic, we sought the WHO’s help in procuring anti-retrovirals.”

Former Union health secretary Sujatha K. Rao, said that the WHO usually supports member-states, but there are disagreements, too. “In time tenure, we had problems with the huge delays in processing pre-qualification for our vaccines,” she said. “One company in India was manufacturing the polio vaccine at very competitive rates, but could not export because it did not have a pre-qualification certification by the WHO. Done on priority, it would have also saved millions as prices offered were lower. The WHO also tried to label our drugs supplied to Africa and other countries as counterfeit. I remember having lot of arguments over that issue”.

She also felt that, over the years, the WHO shifted its focus away from its core mandate of infectious disease control and disease surveillance. This is an observation several expert committees had made following the Ebola outbreak. “With the increasing frequency of viral outbreaks, it is absolutely essential that WHO prioritises its resources and policy attention to ensure that the vigil on disease outbreaks is never reduced,” she said.

With India set to chair the upcoming World Health Assembly in May, Prasada Rao said it had an opportunity to influence global health policies. “India can take leadership and ensure that (health care) products are accessible to all,” he said. “That guidance, so that even poorer countries get access to affordable drugs and vaccines, can only be given by India.”

How India will negotiate at a global forum where countries and organisations with deeper pockets tend to have a greater say remains to be seen. The foundation has been laid with India’s negotiations with the WHO on both regional and local fronts and its ability to hold its own in tough times. “Our relationship with WHO, like all member-states, is like a marriage,” said the expert. “We do not know how, but something in there works.”