Man with no travel or contact history has caught Covid-19. How? 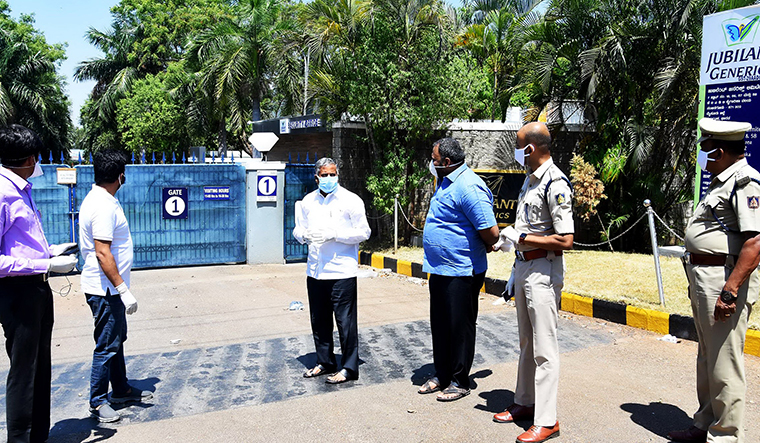 Remedial measures: Nanjangud MLA B. Harshvardhan (in blue shirt) with V. Somanna, minister in charge of Mysuru district, with officials at the pharmaceutical factory in Nanjangud

The curious case of Patient 52 in Karnataka is puzzling authorities in Mysuru district. The 35-year-old patient, an employee of the pharma company Jubilant Generics in Nanjangud, was found to have Covid-19 on March 26. Within 10 days, as many as 24 employees of the company and their relatives had tested positive, qualifying it as a Covid-19 cluster.

How Patient 52 was infected remains a mystery. Since he has no travel or contact history, the main suspect is a consignment of “raw material” from China imported by Jubilant Generics in early March. A sample of the material has been sent to the National Institute of Virology, Pune, and the district administration in Mysuru is anxiously waiting for the result.

“We are in the process of identifying how Patient 52 got infected,” said additional chief secretary Jawaid Akhtar. “We have also taken swab samples from the packaging material that the company received from China. We are following procedure and are trying to get some leads.”

The unspecified raw material is an active pharmaceutical ingredient that was reportedly shipped to Chennai and later dispatched by road to Nanjangud via Bengaluru. The district administration has been tight-lipped about the case, but Nanjangud MLA B. Harshvardhan has demanded that the criminal investigation department inquire into the matter. He wants to keep Jubilant Generics under lockdown until the source of infection is established.

According to Harshvardhan, the lack of transparency about the matter has made people vulnerable. “I am the local MLA, but I was not kept in the loop,” he said. “My people cannot be sitting ducks. The pharma company should come out clean. Why did they not postpone their import from China during this crisis? Because they did not ensure the safety of its employees, the entire district is living in fear.”

The fear of contamination through Chinese imports is not misplaced. In mid-February, the Indian Drug Manufacturers Association (IDMA) had raised concerns about the possible spread of Covid-19 through contaminated imports from China, as most pharma ingredients and intermediates were being produced in Hubei province, the epicentre of the pandemic. IDMA had asked the government to set up a mechanism under which imports from China would be tested for contamination in laboratories and cleared by agencies like the Indian Council of Medical Research.

“We had urged the government to set up testing of imports,” said T.R. Gopalakrishnan, IDMA’s deputy secretary-general. “But as the consignments were coming in from all over China, and not just Wuhan in Hubei, and as reports said the virus was transmitted only from humans and not products, we did not pursue the matter.”

According to IDMA, India is hugely dependent on China for active pharma ingredients. In the 2018-2019 fiscal year, India imported ingredients worth 017,400 crore from China. “As Covid-19 is a new challenge and very little is known about the virus or its behaviour on surfaces, the pharma companies have to devise their own method of keeping their employees safe,” said IDMA national president Mahesh Doshi. “A lot of cargo is still arriving and it is up to individual companies to deal with it. While the source of infection [in the Jubilant case] is not established, we need to wait for the results to rule out any contamination. We would appreciate it if the Centre comes up with a standard operating procedure to minimise the risk of transmission through imports.”

The Mysuru administration had hit the panic button when Patient 52 tested positive and the Jubilant cluster began growing. The authorities swiftly imposed a cluster containment plan, which involved isolating Nanjangud, sealing all entry points to the town, enforcing social distancing, enhancing surveillance, tracing and quarantining primary contacts and spreading awareness of preventive measures. The authorities have found that at least five employees in the Nanjangud plant who tested positive had no contact with Patient 52.

“At least 1,372 employees of Jubilant Generics are under home quarantine in Nanjangud and Mysuru, and some have been shifted to lodges for better surveillance,” said a health department official. “Anganwadi workers and accredited social health activists are carrying out door-to-door screening of suspected cases. Till date (April 6), 24 of 35 cases reported in Mysuru district are related to Jubilant.”

At least 1,500 people are in home quarantine and the police are ensuring that they are staying indoors. Families in home quarantine feel stigmatised by the HQ stickers pasted outside their homes. Many people who removed the stickers have been warned by the police. “The HQ stickers will be removed by health officials after the mandatory isolation period of 14 days,” said C.B. Ryshyanth, superintendent of police. “Removing stickers is an offence under the Epidemic Diseases Act.”

The district is now dealing with twin challenges—the detection of cases linked to the Nanjangud plant and to the Tablighi Jamaat congregation in Delhi (seven cases so far). “We are seeing new cases in quick succession,” said Mysuru deputy commissioner Abhiram G. Sankar. “But the fact that these cases are from the primary and secondary contacts of the Jubilant cluster is a relief.”