Against an invisible enemy 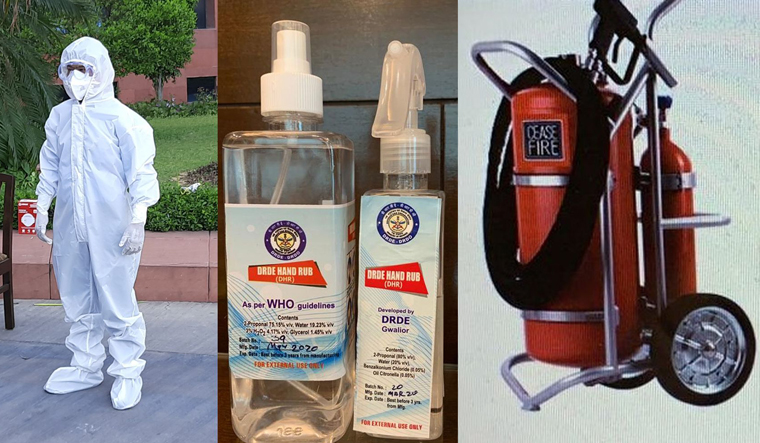 Till a few months ago, scientists of DRDO’s Hyderabad-based Research Centre Imarat (RCI) were working tirelessly on an anti-satellite (A-SAT) missile project. But on March 27, when Defence Minister Rajnath Singh sent a congratulatory message to the team on the first anniversary of Mission Shakti, Dr Narayana Murthy, director of RCI, and his team were brainstorming about ventilators, a critical requirement in the war against Covid-19.

The focus for these scientists has temporarily shifted to developing a number of health care products—from high-protection face masks to full-body protection suits—on a war footing. “This really is a tough time for all of us,” said Dr G. Satheesh Reddy, DRDO chairman. “The DRDO is contributing by developing low-cost health care items so that mass-scale production can take off easily.”

The DRDO’s Chandigarh-based Terminal Ballistics Research Laboratory (TBRL) has produced 10,000 full-face protective shields and 15 acrylic enclosures that are used for examining Covid-19 patients. Doctors of Chandigarh-based Post Graduate Institute of Medical Education and Research have been given these. A DRDO scientist explains that face shields come in single- and multiple-use variants. The various intubation protective enclosure can be used multiple times and was required by the departments of anaesthesia and intensive care as first level of protection for doctors and medical staff.

As for sanitisers, an ethyl alcohol-based formulation and the process has been shared with industries and the production in bulk has been initiated. Based on Defence Research and Development Establishment (DRDE) Gwalior guidelines, DRDO laboratories across the country are producing a large amount of hand sanitisers and distributing it to local administrations. The expected production is more than 30,000 litres per day; the cost is Rs120 per litre.

DRDE scientists have also developed a five-layered N-99 mask with the inputs from two industry partners. The aim is to produce up to two lakh masks a week. The Institute of Nuclear Medicine and Allied Sciences (INMAS), a Delhi-based lab, has also pitched in by designing three-ply surgical masks, producing it through private players.

Bio suits developed by DRDE scientists are being produced by three industry partners and supplied to the ministry of health and family welfare. INMAS and Agra-based Aerial Delivery Research and Development Establishment have also developed bio suits. The DRDO claims that the body suit developed earlier to manage and evacuate causalities in the event of radiological emergencies has now been converted into a full-body suit to stop contamination.

And, when the production of bio suits was hampered by non-availability of seam sealing tapes, the military scientists were not deterred. “Our scientists at ADRDE have come up with a special adhesive, originally used in submarines, to be used to mass produce full-body suits at low cost,” said Dr A.K. Singh.

Singh added that the DRDO can now mass produce this glue through the industry to support the seam-sealing activity by suit manufacturers. They plan to produce between 15,000 to 20,000 PPEs per day. The DRDE’s synthetic blood penetration test facility will test the PPEs to ensure they meet the standards. Each bio suit costs Rs7,000.

It is expected that the country may require around two lakh ventilators in the coming weeks. India has only about 50,000 ventilators at present. Some time ago, the DRDO had developed a ventilator with the Society for Biomedical Technology, and its technology has been transferred to the industry. The industry currently has a capacity to manufacture 5,000 ventilators per month and this could be scaled up to 10,000 per month, with the cost of each coming to about Rs4 lakh. DRDO’s Defence Bio-Engineering and Electro Medical Laboratory in Bengaluru is perfecting a multi-patient ventilator that can be used by eight patients at a time.

At Vehicles Research and Development Establishment in Ahmednagar, scientists have designed a full-body disinfection chamber for personnel decontamination—a portable system equipped with soap dispensers and disinfectant sprays to be used at the entrance and exit of facilities.

Apart from the DRDO, other military scientists, too, have joined the fight. While the Ordnance Factory Board has manufactured and dispatched 50 specialised tents for Covid-19 patients to the Arunachal Pradesh government, the Ordnance Factory Medak has undertaken repair of ventilators in various hospitals in Hyderabad.

The Indian Navy, too, has shared its technology. The naval dockyard in Mumbai has designed and developed an infrared-based temperature sensor for screening of personnel at the entry gates of naval yards. Commander Vivek Madhwal, spokesperson for Indian Navy, said the instrument has been manufactured using in-house resources and will be sold for under Rs1,000.