A writer, a caring husband, a devoted father and a doting grandfather—Wajeed Haseeb was all this and more when he was alive. In death though, his identity was reduced to a letter and a digit—P6. Haseeb, 76, was India’s first Covid-19 casualty. He died on March 10, nearly 10 days after his return from Saudi Arabia. 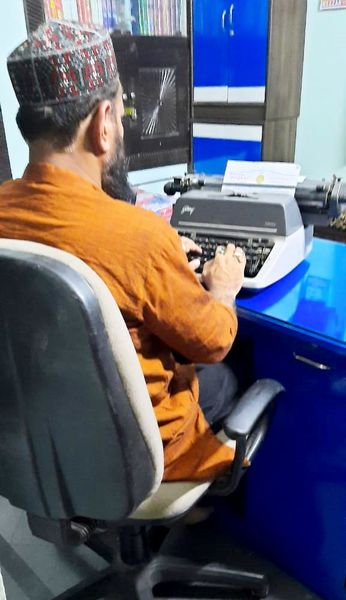 In Haseeb’s room in a four-bedroom house in Kalaburagi in north Karnataka, books and files are neatly stacked on wooden shelves as in a library. A typewriter sits forlorn, missing its companion. The most enduring image Dr Abdul has of his father is of him typing away at his desk. “He took great delight in writing, and brought out a collection of Urdu poems written by my grandfather,” says Abdul, Haseeb’s younger son who works as a dentist in Saudi Arabia. “He was no poet, but he was into poetry, and had a shayari for every situation. He published nonfiction books, too, on subjects ranging from Islamic law to the history of qazis (magistrates under Sharia law).”

Haseeb, who also loved to read and farm, was the mutawalli (trustee and caretaker) of Jama Masjid in Kalaburagi, head qazi of Kalaburagi city and president of the qazi association in north Karnataka for more than 40 years. Born in a middle class, agricultural family, Haseeb had his share of financial struggles growing up. But he did not let those come in the way of his education; he pursued a degree in arts. He also ensured that his nine children—seven daughters and two sons—were well-educated. But he would spoil his grandchildren silly, lavishing them with candies and chocolates whenever they would visit him. He had come bearing gifts for them from Saudi Arabia.

“He had been our family’s pillar of support,” says Abdul, 40. “When my mother was sick, he converted their bedroom into a mini-hospital ward, and he stood by her side until her last breath.’’

People who were close to Haseeb remember him as “a true gentleman who was very kind, often forgiving and ready to help”. “He was always willing to lend a sympathetic ear and would give zakat (annual payment under Islamic law to be used for charity) generously during Ramadan,” says Haseeb’s elder son Qazi Hamed, 50. But Haseeb was not one to brag about his charity work, says Abdul. “My father told me that charity is best when given privately,” he says.

The grieving family is still coming to terms with Haseeb’s death. Abdul says it is unlikely that he contracted the disease in Saudi Arabia. “The first case of Covid-19 in Saudi Arabia was reported on March 3; in the city I live in, the first case was reported a week later,” he says. “Also, he stayed with me and my family for a month. I have three kids—aged 13, 11 and 8. All are fine and have showed no symptoms.’’

Haseeb’s family doctor who knew him for 15 years says that he was quite healthy. He did not smoke or chew tobacco, and only took medication for hypertension. “He was hale and hearty. I thought he would survive,” says the doctor who is now referred to as P9 in news reports. “He was a good human being. I feel like having lost a best friend or brother.”

On March 6, Haseeb had called the doctor, complaining of fever and chills. The doctor treated him for three days. “His pulse was good. Everything was normal except his body temperature, which was 103°F,” says the doctor. “As he developed symptoms of pneumonia, I referred him to a pulmonologist.”The doctor and his wife tested positive for Covid-19 a few days after he met Haseeb. “However, we were asymptomatic,” says the doctor. “We didn’t have fever or any of the typical symptoms of Covid-19.”

According to the government’s press release, Haseeb was admitted to a private hospital in Kalaburagi, where he was diagnosed with “mid zone viral pneumonia”and “suspected Covid-19”. He was tested for Covid-19, but without waiting for the results, the family got him discharged against medical advice, states the press release. Haseeb was then taken to a private hospital in Hyderabad in an ambulance. He died when he was being brought back to Kalaburagi to be admitted in the Gulbarga Institute of Medical Sciences.

Abdul, however, says that Haseeb was denied admission in five private hospitals. “He had to spend his last 24 hours in an ambulance that was not well-equipped,”he says. “I wish I was in India, supporting him and taking care of him in that difficult time.” The family, he says, is yet to get his Covid-19 test reports, which came only after his death.

Haseeb died without fulfilling one of his wishes—he wanted to open a counselling institute for the poor. “Many people used to visit him seeking help with relationship and marriage woes,” says Abdul. “He would get upset hearing their stories and wanted to set up an institution that would teach moral and family values to minimise such issues.’’

But another wish of his did come true—Haseeb wanted to die in India, says Abdul. “He was buried on Indian soil,” he says. “His first and last love was India.”

—Names have been changed to protect identity