Hanging on to hope 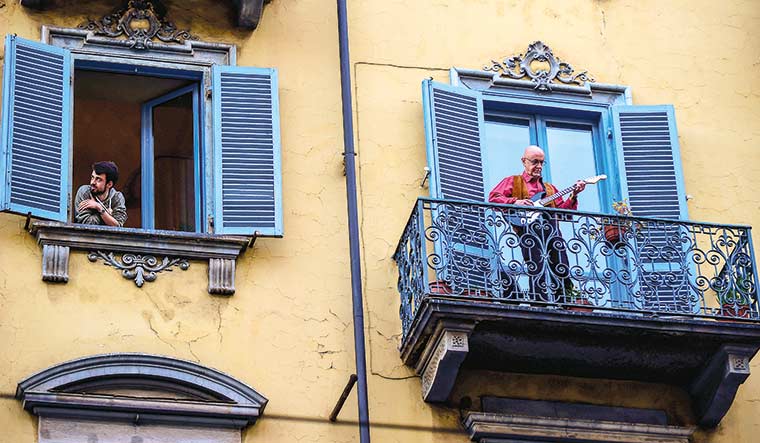 Recovery notes: People in Turin look out of their apartment windows during the flash mob campaign organised to raise morale during the coronavirus crisis | Reuters

Gianfrancesco and Angelo Federico have been attending the Vibo Valentia Academy of music in southern Italy for years. The two brothers—one a cellist and the other a violinist—would never have believed that they would use the balcony of their terraced house in the town of Crotone as a stage. But they did so on a silent evening this month. The brothers joined the first national flash mob organised by Italians after being forced into quarantine to contain the coronavirus infection by playing Leonard Cohen’s Hallelujah. “Because it is a prayer, and because it is full of hope. We need to hope,” they said, after their performance became viral on social media. From the balconies of their homes in Rome, Naples and Milan, hundreds of Italians sang or played with their instruments popular songs, from “Azzurro” by Adriano Celentano to the Italian national anthem.

Italians are reacting to fear in the most natural way—with optimism, the quality for which the world admires them the most. And, from a tragedy that has already caused more than 2,000 deaths, especially in northern Italy, new opportunities arise. Elena Inversetti works in the communication sector and lives in the southern outskirts of Milan. She also participated in these musical flash mobs and noticed that something has changed. “I have lived here for five years, but I have never met my neighbours,” says Elena. “The neighbour is a stranger. If you meet him on the stairs, he takes the elevator. We only say ‘good morning, good evening’. Nothing more. But now that we have all seen each other from the balconies and we have sung together, something has changed. We exchanged phone numbers to send us the flash mob videos and suddenly we know who lives near us. Unexpected solidarity is emerging. How strange are these days.”

The aberration is because of the sudden change of habit for a people who love group meetings, fun and external displays of affection. The Italians try to exorcise death by greeting and singing from the balconies, and in all cities, the atmosphere is spooky. The national decree prevents anyone from moving, unless for very serious health reasons. Italians are only allowed to go to supermarkets, and that, too, wearing gloves and masks. They queue up outside shops, maintaining the minimum distance of one metre from each other. You cannot go out to play in a group or go to the park, unless you go for a walk alone. The authorities in the northern cities have also decided to cordon off parks to avoid people coming together. Those who break the rules are fined and may have to serve up to three months in prison.

Emiliano Dal Toso, a student who lives with his dog in a deserted Milan, says he goes out only to the supermarket and to walk his dog. “I always carry a document with me, in case some policeman stops me and asks me what I do. I am not missing anything and I am not afraid, but I feel very lonely these days.” In these urban landscapes which were once so crowded and now so empty, supermarkets have become the new venues for socialising. After the first week of restrictions when goods were raided—especially pasta, tomato, meat and toilet paper—there is now a certain order. “The first few days were very difficult. People filled their carts as if they were going to war,” says Concetta Sampieri, who works in one of the Carrefour stores in Milan. “Now there is order and civic sense. Many elders only see us cashiers and also try to make friends. There is more talk, but with some circumspection. After all, everyone knows that even a friend or a family member can be a carrier of the disease.”

As many as 80 per cent of the infected and 90 per cent of the dead are aged 60 or above, with a majority being over 80. Italy is a country of old people and this is probably one of the reasons why the number of deaths is very high. Families are worried about the close interaction between grandparents and grandchildren and this is one of the reasons why the government has encouraged work from home. Laura Carcano, a teacher who monitors a WhatsApp group of infected mothers in Milan, says it is a real tragedy in some families. “A family member who is tested positive will have to stay in an isolated room, eat alone and use a separate bathroom. It is not always possible in large cities where apartments are very small. Moreover, children suffer greatly because of the forced immobility and also because they are forced to stay away from infected mothers. They do not know how to contain their energy and the parents, working from home, do not know how to entertain them. We hope the emergency will end soon,” she says. 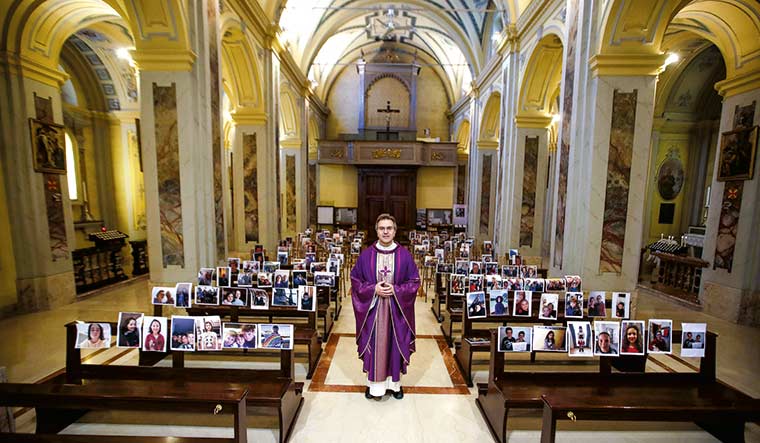 In God, we trust: Don Giuseppe Corbari, parson of the Robbiano church in Giussano, northern Italy, poses next to selfies sent by his parishioners after services were suspended following the coronavirus emergency | AP

But not everyone is depressed. Eighty-year-old Rosa Nicosia from the southern Italian city of Catania takes care of her 90-year-old disabled husband. She has got grandchildren in Milan. Rosa remains upbeat. “I survived the Asian epidemic as a child. I know what that means. So I tell my children, ‘Stay in the north, do not come back to the south. My husband is very old and they say the virus mainly attacks the elderly. I go out daily to buy bread and other things. What if someone infects me? I have no idea. I pray to God to protect my children and grandchildren. I have lived long enough. Anyway, it will pass. I survived another epidemic, I know that sooner or later it will end.”

Not everyone thinks like Rosa. In the last two weeks, many young people from southern Italy who live in the north for studies or work, have returned to the south. The government has now imposed stringent restrictive measures. “Many of these young people are healthy carriers of the virus,” says Daniela Gastaldi, a cardiologist. “This is why I have been asking my children not to visit their grandparents.” Unfortunately, Italians in the north understood this late, aggravating the situation. For instance, in the city of Bergamo near Milan, no slots are available in intensive care units and the number of deaths have been going up alarmingly. Lucia Airoldi, a nurse who works in the emergency room of the polyclinic hospital in Milan, speaks about the difficult decisions people like her are being forced to make. “We face enormous stress and are forced to favour patients with a higher life expectancy—a choice we would not like to make, not to mention our personal risk and what our families are subjected to. We are in deep crisis and we know that we have not even reached the peak of the contagion.”

To find a solution, the Italian government has asked for help from Europe, but so far it has come only from China. The Chinese government sent a cargo aircraft with nine containers of fans, cardiorespirators, hospital materials, masks and also a team of doctors who faced the pandemic in Wuhan. The team from China will assist Italy in setting up a large field hospital in Milan.

Italians, meanwhile, have become convinced that staying at home is the most reasonable solution to fight the virus. As they work hard for the common good, they firmly believe that hope has never hurt anyone.