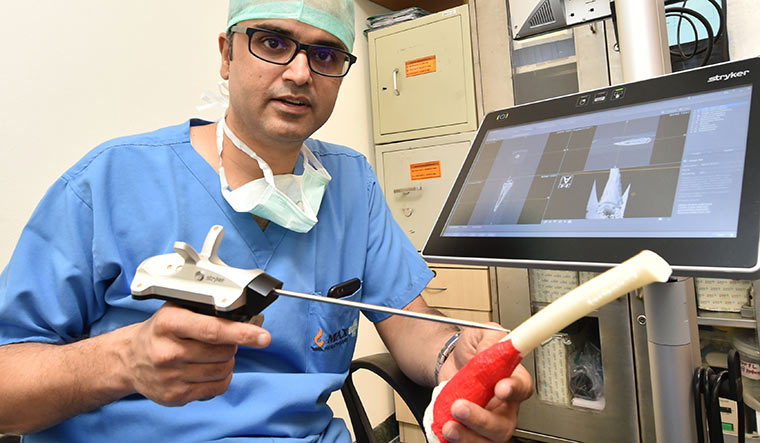 IMAGINE GOING FOR an MRI scan. As you enter the MRI chambers at a premier hospital, you are greeted with soft ambient lighting and LCD screens with picturesque shots of nature. Despite the ambience, the sight of the monstrous MRI machine is still unsettling. You lie still and defenceless, entering a narrow tunnel, and try and tune out the deafening noise of the machine. The next 30 minutes or so can be quite an anxiety-ridden experience for many patients.

With new technology, however, doctors are hoping to transform that experience. The SIGNA Artist MRI machine allows patients to put on a pair of virtual reality glasses and headphones and access their favourite YouTube videos, even as it captures high-quality images from the deep recesses of their body.

Welcome to the ever-evolving world of technology in health care. From a proton-powered therapy to specifically target cancer cells to navigation systems that allow surgeons to accurately map the contours of cancerous tumours with real-time data to softwares that help doctors remotely monitor elderly patients, hospitals are banking on the latest technology to offer better patient experience and improve treatment outcomes.

Beyond the big-ticket infotainment system, the SIGNA Artist can produce better quality images from areas where the current generation of MRI machines cannot. It can also allow for full-body diffusion, used in cancer diagnosis to map the spread of cancer cells throughout the body without exposing the patient to radiation.

Technology can also enable doctors to achieve precision in mapping the diseased areas and excising difficult, deep-seated tumours. Take the field of ortho-oncology (bone tumours), where surgeons are aiming for precision in the range of millimetres. Before operating on the bone tumour in the pelvic area of Laksh Sharma (name changed), Dr Akshay Tiwari, associate director and head, musculoskeletal oncology, Max Super Speciality Hospital, Saket, plans the surgery on a computer with a special software. He first uploads the MRI and CT reports of Sharma, 7, and studies the contours of the tumour on the screen. The system is given other crucial instructions such as sending the doctor an alert if he is not on the right track or is deviating from the plan.

At the onset of the surgery, Tiwari places his cutting instrument, fitted with sensors, on three critical points of the area where he intends to operate—a process that is known as registration. The points are ‘read’ by a camera that sits on top of the screen that communicates with the sensors on the instruments, and the coordinates he has marked on the body part are matched with the data gathered from the reports. This process generates data that gives the surgeon a clear location of the tumour and the surrounding elements such as muscles and blood vessels. “Surgeries for bone tumours are particularly challenging because unlike in other parts of the body, here we cannot see the tumour because it lies inside the bone,” he says. “Having an accurate map with the help of the machine helps us plan the area that needs to be cut, and I can avoid going too close to the tumour.”

His intention, explains Tiwari, is to not just remove the malignancy, but also to save as much of the healthy cells as possible for retaining functionality of the limb. “With the computer-assisted navigation system it is like having a GPS that helps a surgeon make crucial decisions such as how to save a joint, portions of the bone that are unaffected, and sensitive tissues and blood vessels,” he says.

Technology-aided precision is also helping oncologists target and kill cancer cells and save healthy cells by using high-energy proton beams, instead of the conventional X-rays and the standard photon beam therapy. Though protons were discovered in the 1940s, their use to target specific cancer cells was found only in the recent decade or so, says Dr Rakesh Jalali, medical director and head, radiation oncology, Apollo Proton Cancer Centre, Chennai. However, in recent years, the technology of using protons that was once cumbersome, expensive and could only be used to kill small, superficial tumours (because of them being low-energy particles) has evolved to target all kinds of tumours, he says.

“In conventional radiation therapies including photon therapy, the radiation scatters and there is always that extra dose of radiation that enters the surrounding structures and causes damage,” says Jalali. “In proton therapy, we use a pencil beam and, line by line, layer by layer, ‘paint’ the tumour with the high-energy proton beam. This makes it very precise, and can be used to target deep-seated tumours, and the dose can be managed accordingly.” The technology is complemented with image guidance by cone beam CTs to identify the exact target of the tumour. “Even the ambience of the rooms where therapy was administered has evolved—from the Star Trek type rooms of the 1970s and 1980s to one with soft lighting, music and a generally comforting atmosphere,” says Jalali. The therapy has been found to be effective in paediatric cancers, brain tumours, prostrate, head and neck and liver cancers. More data is needed on cancers of the lung, left-sided breast (close to the heart), and pancreas.

“Today, by leveraging data, we can drive quality outcomes much faster and with higher accuracy through the use of predictive analytics and artificial intelligence,” says Dr B.S. Ajaikumar, chairman and CEO, HealthCare Global Enterprises Limited, Bengaluru. “It will help in providing the right treatment at the right time. Big data and AI techniques such as machine or deep learning and neural networks are redefining cancer care and providing opportunities to improve disease management.” Ajaikumar says AI is also a vital tool to tackle data deluge and can make work more efficient without compromising on the quality of care. “Through adopting state-of-the-art technology, we can tailor the needs of patients and clinicians,” he says.

Beyond oncology, advanced softwares are also being employed to facilitate remote care for the elderly. A ‘home ICU’ setup that enables remote monitoring of critical, elderly patients from the hospital offers two advantages, says Dr Anoop Amarnath, head, geriatrics, and chief of clinical services, Manipal Hospitals. “It decreases the chances of hospital-acquired infections, and allows for faster recovery of the patient within their home setting,” he says.

Amarnath recalls how a patient who was suffering from multi-organ failure and had been on dialysis and ventilator was eventually sent home for recovery. “Even as his situation improved in the hospital, we were not able to wean him off the ventilator. There was also a risk of contracting infections. He was shifted back to his home, where we had trained staff to take care of him, even as we were monitoring real-time data on his vital parameters from the hospital premises,” he says. A year and a half later, Amarnath says his patient has been off the ventilator and is able to walk, too.

India’s elderly population is only second to that of China’s and at least 60-70 per cent of hospital visits by the elderly are follow-up ones, says Amarnath. “By setting up a remote monitoring system at an old-age home 40km away from the city, we are able to prevent those people from having to commute all the way to a tertiary care hospital,” he says.

Though technology is changing the way doctors at premier hospitals are treating their patients, Amarnath says the country’s regulatory framework has to catch up, too, to allow for patients to fully benefit from the technology. For instance, he cites the challenge of the remote monitoring system, where the law does not allow a doctor to prescribe medication through a technology platform, unless a trained nurse and doctor are also present at the other end.

With the Union health ministry having released a blueprint for creating a National Digital Health Ecosystem, things are set to change. “We believe that with the NDHE, we are going to see changes in the regulatory framework. Once the rules are set, we will also need to coopt the state medical councils that regulate doctors,” he says. Besides regulatory framework, the right ecosystem and issues such as data confidentiality will also need to be worked on. “Ultimately, technology is only a means to an end, and the real test of it lies in achieving better health indices,” he says.

A surgeon’s knife can be guided, a radiologist can have access to better images, cancerous tumours can be mapped and targeted more precisely and a software can transmit vital parameters, but, as doctors concede, none are substitutes for human skill, finesse, hard work and experience.