Economic revival in UP is remarkable, but long-term challenges remain 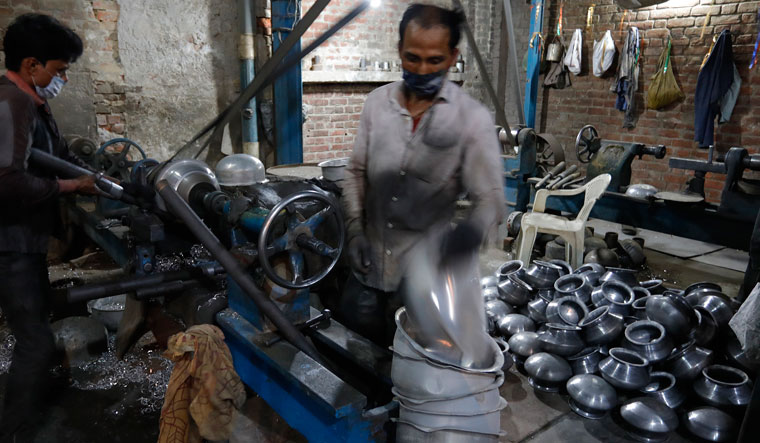 It happens, but rarely, that a state learns from its official animal. But Uttar Pradesh is assigning to itself the most marked characteristic of the barasingha, the 12-horned deer that flourishes in swamps. From the sludge of the ruin left by the Covid-19 pandemic, the state is forging a path to economic growth through its micro, small and medium enterprises (MSME) sector.

Drawing equal parts applause and bewilderment, Chief Minister Yogi Adityanath seems to have outrun the Centre and other states on the track to achieving a swift economic revival. On April 16, as the contours of the crisis were emerging, he first spoke of turning it into opportunity. The chief minister insisted that the first of the two big road projects to the east, the Purvanchal Expressway, become operational by the end of the year. Connectivity would bring investment to the state’s most deprived region and also harness the power of its workforce, which forms one of the largest chunks of out-migrants in the country.

This was followed by a rush of announcements, including a Covid-19 response and industrial revival strategy, a relook at labour laws, a single-window approval system for projects, an online portal (MSME Sathi) for grievance redressal, mapping the skills of returning workers and matching them to available jobs, exploring the possibility of attracting companies shifting their production bases from China and the launch of a startup fund.

Sidharth Nath Singh, UP’s MSME minister, said that all of this was being driven and marked by Adityanath himself (see interview). Navneet Sehgal, the state’s principal secretary for MSME, said that the response was possible because Adityanath foresaw the situation. “The chief minister had a clear vision of the magnitude of the challenge,” he said.

One example of the sure footedness of this response is the speed with which the state’s self-help groups affiliated with the National Rural Livelihood Mission (NRLM) turned to making masks, sanitisers and personal protective equipment (PPE) kits almost as soon as the lockdown was announced. At last count, they had earned 08 crore from sales.

The state has sought to build new partnerships while strengthening old ones. Mukesh Aghi, president and CEO, US-India Strategic Partnership Forum (USISPF) told THE WEEK that the body was “encouraged by the focused efforts of the state in ease of doing business and actual grounding of investments”. He said, “The government has been in close contact with us and has been supporting our membership on all aspects of investment facilitation as well as for issue resolution related to business continuity matters during this pandemic.”

The state industries department has displayed a high level of preparedness to tackle the uncertainties of the pandemic and infuse its own non-fiscal measures to steady economic processes. The issuing of e-passes and enabling production, movement and distribution of essential goods were quick and fuss free. It was also quick to operationalise industries such as packaging, without which essential goods could not be delivered.

On the issue of continuous process industries, the department’s officials took their own calls. In the Kanpur division, Sarveshwar Shukla, joint commissioner for industries, permitted fertiliser and chemical factories to run to avert a potential disaster like the chemical plant gas leak in Visakhapatnam on May 7. “Such industries require a 15-day shutdown or startup time. If not monitored properly, the industrial scale gases used in production can cause damage, said Shukla.

However, for all its ability to survive in the bog, the barasingha is an animal of middling pace, much like the government’s investment efforts. In February 2018, the state hosted its first investor summit, in which 1,045 memorandums of understanding (MoUs) worth Rs4.28 lakh crore were signed. Only 371 of those have matured into investment announcements and by May 2020, only 106 had started commercial operations.

Alok Agarwal, president of the Indian Industries Association (IIA), Kanpur, one of the bodies that has signed an MoU for matching the skills of three lakh workers said: “The chief minister is well intentioned, but his government believes too much in grand gestures. A single-window online system of clearance (Nivesh Mitra) has been in place for a while now, but there is no time limit as to how long it might take to process an application. This defeats the purpose of a transparent mechanism.”

The state’s MSME sector is its surest driver for change. In 2018-19, there were 89.99 lakh units in UP—the most for any state—which provided employment to 1.65 crore people. There is however distressing fine print in these numbers. Land is plentiful in the state, but its allotment is knotty. Loans given to the sector are easy on paper, but banks are distrustful of entrepreneurs. 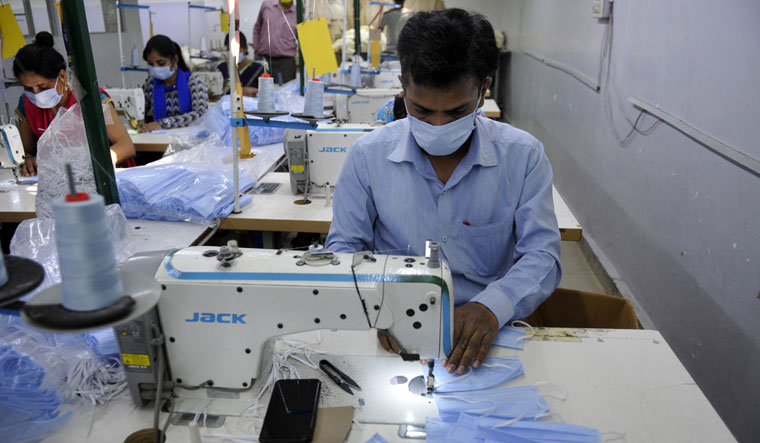 Need of the hour: A factory that makes protective equipment, in operation in Noida, Uttar Pradesh | Getty Images

In January 2018, the government launched a ‘One District One Product’ (ODOP) scheme that is now the centrepiece of this sector. Under this scheme, 57 products with a strong traditional skill and production base across the 75 districts have been identified, and entrepreneurs helped out. The initiative is modelled loosely on China’s one-town one-product scheme, and the state is hoping it will draw investors now pulling away from China.

Sehgal said that the scheme’s operational life had given the government a clear start on fine-tuning it during the crisis by sanctioning common facilitation centres that would enhance the quality of the products. Fourteen such centres have been sanctioned for Rs92.07 crore. “In Sambhal, we make unique buttons from animal bones, which were sent to China for finishing, as button makers could not afford the machine for it. Now that will be possible in the district itself. Such common centres will generate both direct and indirect employment,” said Sehgal. Almost 80 per cent of the state’s export basket is made of these products, which include silks from Varanasi and leather shoes from Agra and Kanpur. However, that is not necessarily an unalloyed positive.

Arvind Mohan, economics professor at Lucknow University, pointed out that the state needed to identify products to cater to the needs of its 22 crore people. According to Mohan, the key to an economic flourish in the state would be a “new kind of public-private partnership”. “Under the Mahatma Gandhi National Rural Employment Guarantee Scheme (MGNREGS) for example, a percentage of the state’s labour can create permanent and productive assets for use in the MSMEs and thus reduce their input costs,” he said.

Brij Kumar Bajpai, director of the Giri Institute of Development Studies (GIDS), said that much of what the government could do had already been suggested by previous studies it had commissioned. He cited one such research on the doubling of farmers’ income by 2022-23, conducted by GIDS in the state in 2019. “The report contains suggestions on coordinated commercial agriculture of fishery, animal farming and orchards; effective control on post-harvest losses, partnership with private sector to create infrastructure for food processing... but these were not paid any attention till a section of the media reported on it. The government must use the advice of the specialists it has and not just rely on bureaucracy,” said Bajpai.

Sunil Vaishya, former chairperson, IIA (Kanpur), said that while the state’s pandemic rush was notable, it needed to get the more mundane bits in order. “Investment comes when basic needs like law and order, electricity supply and infrastructure are met. Jobs come in when manufacturing units are set up, but the state has received more investment in the service sector. The state should nurture and build relationships with investors within the state, who are its biggest investors,” he said.

One way of solving old problems has been offered by tweaks in the labour laws in the state. Amit Shukla, legal consultant to corporates and the Lucknow-based district secretary of the Confederation of Indian Micro, Small and Medium Enterprises said: “Labour laws have scared off investors from UP. It is almost impossible to fire a non-performing worker. Successive governments have not overhauled [the laws] for fear of a political backlash. This government has shown the will to bring changes.”

The immediate goal seems to be to protect the state’s migrant workers from suffering like they have during this crisis. However, these workers may not want to stay back when it is business as usual. On June 1, when the Pushpak Express to Mumbai restarted, many of those who boarded it at Lucknow were UP natives. Among them was Hari Om Soni, a 50-year-old jewellery maker from Basti, who had worked in Mumbai for 35 years. He was returning with his 23-year-old son to his two younger daughters and to living quarters that measures 10 by 12 feet. “What will my small slice of land in the village get me? When old and weak, I might return permanently. For now, there is work to be done,” he said.

And till there is that, the charm of the barasingha might not be readily visible.