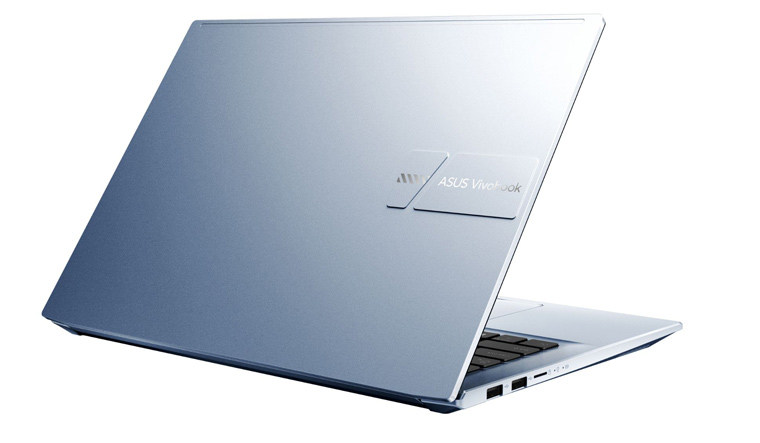 We reviewed the ASUS 14X OLED Space Edition, a rather higher-end, somewhat fancy laptop, and now it is time to take a look the company’s more budget friendly and mainstream Vivobook Pro 14 OLED (M3400QA) model, which starts at a base price of Rs. 59,999.

The ASUS Vivobook 14 OLED continues the company’s journey towards an all-OLED offering for its laptops. The laptop weighs a little under 1.5kg and measures around 19mm—it isn’t the thinnest notebook but it is not really thick either. The ports include power, USB 3.2 Gen 2 type A port on the right side, along with an HDMI 1.4 port and a 3.5mm headset jack; while 2 USB 2.0 ports and microSD card reader sit on the left side.

The trackpad on the front takes a significantly larger area. The keyboard spacing, though, doesn’t get hampered at all. The keys are backlit, but the individual lighting on the keys isn’t quite bright enough. The vents are all situated on the bottom of the laptop, they aren’t super loud and go about their job quite well, but a lot of folks might still prefer them on the sides for better circulation, or at least some of them on the sides and not entirely all on the bottom side of the laptop. On top of the lid, there is the ASUS Vivobook branding in a protruding rectangle on a side.

The device seems sturdy enough and not cheap from any side or corner at all, considering the price segment.

The notebook sports a 14-inch (2880x1800) OLED display with 16:10 aspect ratio, which a lot of content creators might prefer. The display is sharp, has great contrast and is bright enough for outside usage and supports HDR, too. It isn’t a touch display, but it doesn’t attract smudges and fingerprint when contacted accidentally like some previous ASUS models have shown. It supports a 90Hz refresh rate and it definitely shines through in general scrolling and video viewing.

At the top of the display, there is a 720p webcam with a physical switch that you can turn on or off. You can also turn it off with the F10 key. The webcam is decent enough for video calls, but you may avoid using it for taking photos. The fingerprint scanner given on the power button has 'Windows Hello' support, and is quite fast and reliable, not missing to unlock with the correct finger/thumb too many times.

It is powered by AMD Ryzen 5 5600H chip with Radeon Graphics, coupled with 16GB DDR4 RAM.

The model I tried has a 512Gb NVMe SSD and comes with Windows 11 Home 21H2 version. The overall performance of the device is satisfactory; I wouldn’t put it in the ballpark of ASUS’ 14X OLED Edition, but it holds its ground well considering the price tag and competition. Fresh boot time takes around 15 seconds, the laptop wakes up quickly enough from sleep and from the hibernate mode, too. Apps and read-write speed are maintained and sustained well that you wouldn’t be left scratching head, which is nice to see for a mid-range laptop. The pre-loaded apps include MyASUS app (which has a couple of goodies such as Dropbox and Timeline backup) and McAfee. Windows 11, with its dark mode (on be default) seems to gel in well with the OLED’s decent black level.

There’s a 50wh battery unit in place with support for fast charging with a 90watt charger. It lasted about 5 hours with moderate usage, display brightness at around 35 per cent and having WiFi and Bluetooth switches always turned on. It is a bit disappointing but still somewhat okay in this price segment. The speakers on the laptop (Harman Kardon) are loud and quite punchy for watching videos and playing a game when indoors. Though they don’t give a huge bass but still do a good job of handling audio for shows and music when you aren’t around many people.

All in all, the ASUS Vivobook Pro 14 OLED is a good performer when it comes to display quality, features like fast charging, fingerprint scanner and its build, but lacks a bit when it comes to battery life, though its general performance is on par. The overall package is still pretty decent for the price tag, if you want a 16:10 90Hz display for content.