The phone feels really nice and premium to hold 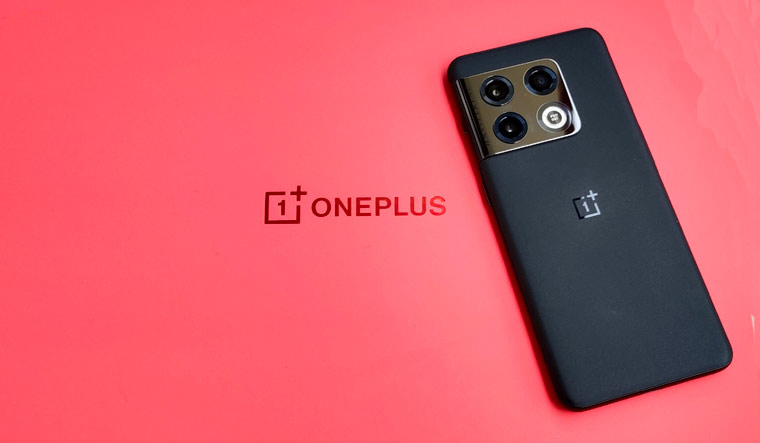 The OnePlus-Hasselblad partnership has been going on for a while for OnePlus’ flagship cameras, and the OnePlus 10 Pro 5G is another example. But the camera isn’t the only story here worth noticing. This OnePlus flagship device offers a lot more and then some, let’s try and see if it justifies that base price tag of Rs. 66,999 (we tried the souped-up variant that’s priced at Rs. 71,999). OnePlus 10 Pro’s biggest change over its predecessor is perhaps is design. One look at it – the back houses the triple-camera setup with the Hasselblad branding (not hard to miss) on a rectangular ceramic sheet; then there’s the Corning Gorilla Glass 5 and OnePlus branding on the back. While on the front, there’s the 6.7-inch AMOLED, which also houses the front-facing camera (punchole) on the top left, with the Corning Gorilla Glass Victus on top. The phone is slimmer but a little heavier than the OnePlus 9 Pro. It’s a little slippery but certainly not anywhere close to how slippery the Oppo Find X5 Pro was. The phone feels really nice and premium to hold, the satin finish on the back and the aluminium side (we tried the Volcanic Black colour) do add to the premium factor and don’t attract too many fingerprints and smudges or dust too quickly, either.

The device features a 6.7-inch quadHD+ (3216x1440) curved AMOLED display with a refresh rate of up to 120Hz. The display is really sharp, has great colours, plenty bright. The upgraded LTPO display means it can go from 1Hz to 120Hz and doesn’t have to stick with 60 or 120Hz refresh rate only, which means a little saving on the battery life. For viewing videos and photos, the display does a topnotch job for high resolution content including for HDR. And it’s usable under direct sunlight without much difficulty, too.

Coming to the camera performance, the OnePlus 10 Pro sports a 48MP (f/1.8) main camera, 50MP ultrawide camera, and an 8MP telephoto camera, alongside dual LED flash. From the 9 Pro, the only change here is the ultrawide camera – the sensor used and the 150-degree field of view from that sensor. The overall look and feel of photos from the device appear sharp and somewhat more vibrant than the 9RT. The daylight performance is quite consistent and has no shutter lag. This is where Hasselblad ‘s post-processing and colour mapping shine. You can try from various modes and choose which one goes well with your scene, but in general photos are done well and colours don’tcome out too loud. The higher resolution option seemed to have no real improvement from the predecessors, though it works well enough when used in well-lit scenes. In dark conditions, the phone can take decently sharp and not-so-noisy photos provided you aren’t moving at all. The camera app has a lot of options to play around but it doesn’t bombard you or confuse you at the same time, either. For videos, you have 8k videos at 24FPS and 4k videos at as high as 120FPS now. Give it a try in broad daylight if you want, but when outdoors, the phone might heat up a lot when shooting in 4k. The front has a new 32MP camera that takes really detailed and well-coloured photos, make sure you aren’t moving too much when fulfilling your selfie needs.

The device is powered by Qualcomm’s Snapdragon 8 Gen 1 chipset (octa-core processor, Adreno 730 GPU, and X65 5G modem) along with 12GB (or 8GB) LPDDR5 RAM. It’s your top of the line chipset, with a big and latest generation RAM available for smartphones today. Plus, UFS 3.1 256GB (or 128GB) make this a top-of-the-line smartphone that can compete against any other smartphone today. The phone is smooth to use in day-to-day tasks and didn’t show any major hiccups during our usage. Whether it’s switching between apps, or whether it’s using two apps in floating windows – the phone doesn’t struggle at all. It can also handle playing graphically-intensive games just fine but there’s one little downside – what we noticed when shooting 4k videos on it – the phone heats up, and heats up a lot. Even when personal hotspot has been switched on, the phone quickly heats up. This isn’t just for the 10 Pro and has been a thing for several Snapdragon 8 gen 1 devices, and the same time, we saw the heating issue in OnePlus’ 9RT, too, which has a different chipset. Other than this, the phone’s performance has nothing to worry about.

There are dual stereo speakers at the bottom of the device that are loud and pretty clear, would have preferred to have them in the front, but then there’s not much space left there owing to the display and design. The speakers can handle YouTube videos even when outside well enough. The inear speaker for calls is loud (though not the loudest among OnePlus phones) and clear for phones calls even in crowded places. Network performance, WiFi reception and Bluetooth 5.2 didn’t show any bumps or speed-breakers and worked just as you would expect them to. Oh, and the ring switcher on the right side works the same way – slide down for ring or up for silent mode. The fingerprint scanner, this time slightly higher than the 9RT, is only slightly more reliable than the 9Rt’s. It works okay, but sometimes gets into t a back-and-forth tangle when used with face unlock where you would have to turn off and on the screen suing the Power/lock button.

It packs a 5,000 mAh battery unit, and comes with a beefier 80watt SuperVooc charger in the box. The phone lasted a full day almost every single day. With brightness at around 30-40 percent, resolution at the highest setting, and 120Hz refresh rate enabled, the phone had 2 Email Accounts in sync, a lot of YouTube time, some Twitter and general Web surfing. It charged from 1 percent to full in about 40 minutes, but again it does heat up quite a bit when it’s put on charge, though it does cool down again fairly quickly.

The phone runs on OxygenOS 12.1 Android 12 with the March security patch. A few of the biggest changes are slightly newer Shelf with bigger looking widgets and you access it from anywhere by swiping down from the top but on the right half of the screen, which I switched off but some other users coming from iOS might like it; the material U theming (not OnePlus’ own branding) works effortlessly, where, with one change of colour palette, you can change the colour of drop-down setting icons, or within Settings. The overall look and feel of the OS are mostly clean and based consistently white or dark (greyish) depending if you have dark mode on or not. The company promises three years of major OS upgrades and four years of security updates from the launch of the phone.

In conclusion, the OnePlus 10 Pro offers many things – most are hits but some are misses too It excels in the display and battery department; it sports top-of the-line internal hardware, has a really capable camera setup, but its misses include that heating issue that crops up 2-3 different situations and isn’t hard to replicate especially if you use it outdoors or are into gaming. The phone competes well on most fronts against the likes of the Samsung Galaxy S22, Apple iPhone 13 and Vivo X70 Pro Plus on its strengths but for some, those little weaknesses might be a deal breaker.