‘Karunanidhi: A Life’ chronicles journey of the prolific writer and leader 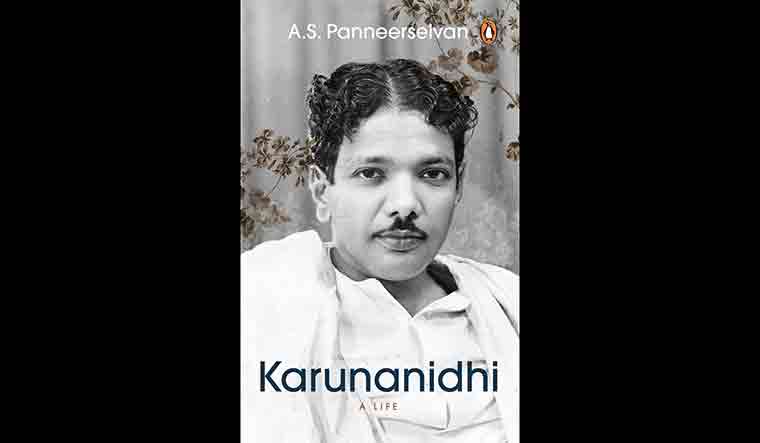 I bought the book instinctively when I saw a quote of Gabriel Garcia Marquez (one of my favourite Latin American writers) in the author’s introduction, “I told Karunanidhi I was using Gerald Martin’s biography of Gabriel Garcia Marquez as a model. I shared with him what Marquez told the biographer: ‘Everyone has three lives: a public life, a private life and a secret life. What Márquez meant to Martin is what Karunanidhi means to me”.

As a journalist, Panneerselvan had interacted with Karunanidhi and those close to him from the family and party. He had worked on the book off and on for about 20 years.

The book gives a glimpse of the life and achievements of Karunanidhi whose talents and achievements are admirable. He is a rare combination of a creative writer with extraordinary oratorical talents, visionary leadership, political instincts, organisational skills and administrative competence. It is even more amazing in the light of the fact that he did not complete school education after having failed repeatedly in the final year school examination.

Karunanidhi was a prolific writer. He has written scripts for 67 films starting with Rajakumari in 2011 and Ponnar Sankar in 2011. He has authored 46 short stories, 13 plays, 10 novels, 2 novellas and 7000 letters he wrote daily in Murasoli newspaper. He also wrote literary pieces and lyrics for some film songs. He had even acted in some of the plays. His autobiography nenjikku needhi (justice to the Conscience) runs into several volumes. He edited newspapers and magazines. An early riser, he used to finish most of his writing before breakfast and before the arrival of party cadres. The combination of prodigious talent, strict discipline and a work ethic was the secret of Karunanidhi’s prolific output as a writer.

He was a mesmerising orator with a unique style of poetic expressions, inimitable humour, witty wordplay and inspiring ideas. I remember how I was moved to cry while listening to his eulogy in radio when Annadurai died in 1969.There is no other Tamil political leader who could match Karunanidhi’s speeches.

Karunanidhi was chief minister of Tamil Nadu for five terms and leader of the Dravida Munnetra Kazhagam (DMK) for over five decades. He has a record of victory in all the 13 times he stood for elections. He was a star campaigner and strategist for DMK party. He got more ministerial posts in the coalition governments in Delhi and got more than the due share of the state from the central governments through skillful negotiations.

The author has put Karunanidhi’s life’s events in the context of the larger political developments in the state, the country and in the world. One such larger issue was the anti-Brahmin movement in the state and Karunanidhi’s promotion of Tamil language and non-Brahmins.  The author cites an incident in one of the Thiagaraja Aradhana music festivals in Thiruvaiyaru. The musicians who participated in the festival used to sing only in Sanskrit and Telugu and not in Tamil. The reason for this was the fact that the Trinity of Composers of Carnatic music comprising Thyagaraja, Muthuswami Dikshitar and Syama Sastri had composed only in Telugu and Sanskrit. Many of the Brahmin singers and composers looked down on Tamil considering it as a language of the lower castes. For them, Sanskrit was the divine language. During an annual festival, one of the singers rendered a Tamil song at the end of his performance in honour of Tyagaraja. The next singer refused to sing till the place was ‘purified’ as it had been polluted with a Tamil song. The organizers immediately called for priests to perform a special puja to purify the place; they cleaned the concert stage with holy water and then invited the next singer to perform.

Reacting to this Karunanidhi had said, “‘My music classes were in reality my first political class. I learnt about the subjugation of human beings based on their caste; I could witness the glee with which some people could humiliate others as well as the self-righteousness of others in practising their customs without even realizing that they are ill-treating a vast majority of the people”.

While the author has covered the achievements of Karunanidhi, he has not gone into the failures, mistakes, electoral defeats of the party, corruption allegations and dynastic politics.