‘The House of Scindias’: Highly engrossing tale of the family, its impact on Indian polity

A retelling of the recent history of the Scindias 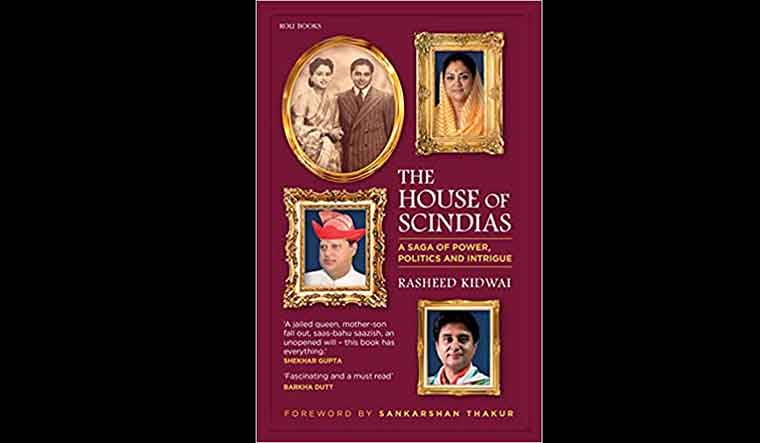 Power, wealth, palace intrigue, family relationships marred by mistrust and political differences, a matriarch and her only son, the heir, falling apart, sibling rivalry and protracted legal battles over property, a retelling of the recent history of the Scindias has all this and much more.

Senior journalist Rasheed Kidwai, a noted chronicler of contemporary politics, has in his book The House of Scindias – A Saga of Power, Politics and Intrigue provided a highly engrossing tale of the family, its internal dynamics and the impact that it has left on Indian polity.

The anecdote-rich narration irreverently throws light on the erstwhile royal family's attempts to showcase its former regal influence through pomp and show and contrasts it with the time during Emergency when it did not have money to even pay the salary of the palace staff in Gwalior.

The book carries a telling description of how a part of the Gwalior royal household was transported to the UK in 1954 at the time of the birth of Yashodhara Raje Scindia, prompting the British media to call it 'George's Circus'.

Yashodhara was born in London while Jiwajirao Scindia was visiting the UK. Gynaecologists, nurses, ADCs, guards, cooks, personal attendants and even dogs were brought to London so that Vijaya Raje and the royal couple's older children could feel at home. “Although they had officially ceased to be monarchs, they still lived the opulent lives of the royalty, and the term George's Circus was repeatedly used, not for their wealth but for the pomp and show that went into flaunting that wealth,” writes Kidwai.

In contrast, as Vasundhara Raje is quoted as stating, during the Emergency, when the family did not have money to even pay the salary of the palace staff in Gwalior, it had to sell off old tents and pieces of silver that had still not been seized.

The book does delve on what is probably the most talked about aspect about the family – the rift between the late Vijaya Raje and Madhavrao Scindia. It looks at different sources pointing out different reasons and timelines for the matriarch and the royal heir parting ways. According to some, the rift between Vijaya Raje and Madhavrao could be traced back to 1972, the year he wanted to opt out of his mother's party, the Jana Sangh, and join the Congress instead.

On the other hand, some of the surviving members of the Scindia family accept that the rift between Vijaya Raje and Madhavrao dates back to before the June 1975 declaration of the Emergency. It is believed that Madhavrao deeply resented the influence that Sardar Sambhajirao Angre, the first cousin of his father Jivajirao, and a confidant of Vijaya Raje, had on her. He strongly felt that the Scindia's wealth was being spent recklessly on politics.

Vijaya Raje, the book claims, blamed Madhavrao's wife Madhviraje for the family rift. “He was a sterling boy. He used to pick up my shoes in front of everybody. But his wife could not bear his proximity to me. So she caused the rift. She is extremely greedy and ambitious. People hate her,” she is recalled as having stated.

Kidwai recounts the 1984 Lok Sabha election, when Rajiv Gandhi fielded Madhavrao from Gwalior against Atal Bihari Vajpayee and Vijaya Raje campaigned against her son. Madhavrao had reportedly told Rajiv that if Vajpayee got wind of the strategy, he would possibly shift to another constituency. This was a time when Madhavrao wanted to prove a point to the Queen Mother by putting to test which way the voters in Gwalior would sway. The plan was kept a secret, and a dummy candidate was put up from Gwalior. Madhavrao dramatically turned up in the office of the returning officer in Gwalior an hour and a half before the deadline. Vajpayee was stunned. Vijaya Raje's campaigning proved to be inconsequential. Vajpayee lost Gwalior by 1,75,000 votes.

If it was hurt and mistrust that defined Vijaya Raje's relationship with Madhavrao, in the case of Vasundhara Raje, she blamed herself for her doomed marriage to Hemant Singh, the prince of Dholpur in Rajasthan.

Just a few months after the birth of their son Dushyant, Hemant had abruptly deserted Vasundhara in Dholpur. He took away with him as much of his moveable possessions as he could cram into a fleet of lorries – carpets, silver, clocks, expensive crockery and wall decorations of Chinese porcelain – leaving behind his wife, his newborn heir and his hauntingly beautiful palace. Vijaya Raje, blaming herself for the failed marriage of her daughter, kept trying throughout the latter part of the 1970s to take responsibility for her life by introducing her to politics, the book recollects.

The House of Scindias – A Saga of Power, Politics and Intrigue