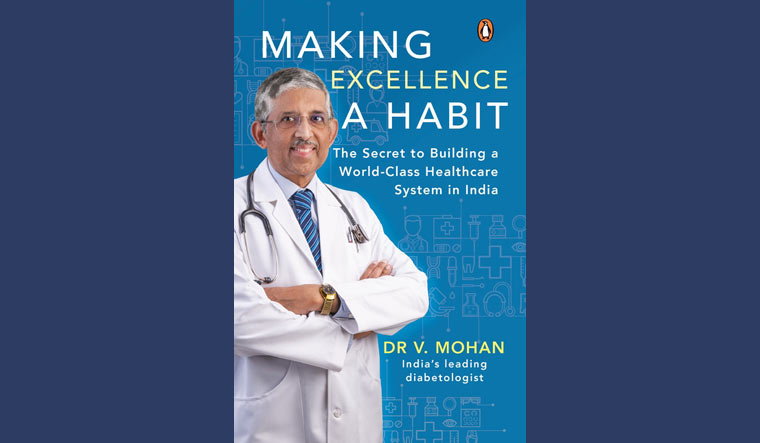 A diabetologist and researcher par excellence, Dr V. Mohan has every right to blow his own trumpet. But in Making Excellence A Habit, his recently released autobiography, Mohan chooses to dwell on the power of grit, passion, empathy, and collaboration, the cornerstones of life, instead of celebrating or bragging about his accomplishments.

''I felt that this would be a legacy I could leave behind for the younger generation, helping them to get the right work-life balance and learn how to achieve success without adopting shortcuts or devious methods,'' says Mohan, a Padma Shri awardee and chairman of Dr Mohan’s Diabetes Specialities Centre, Chennai. ''Making Excellence A Habit is not just an autobiography. It also deals with values in life and shares several pearls of wisdom which I've picked up throughout my life,'' he adds.

The book is studded with anecdotes. He recalls an incident where the pharma industry came down on him after he wrote a letter to the Drug Controller General of India about the potential adverse effects of Pioglitazone, a widely used anti-diabetic drug, causing the drug to be banned in India. Mohan took that extreme step after three of his patients who were on Pioglitazone developed bladder cancer and reports of similar cases started emerging from other countries. Some of his colleagues also had cases of Pioglitazone induced bladder cancer. '' At that time, the Pioglitazone market was worth Rs 800 crore in India, and several companies were marketing it,'' he writes. Mohan was bombarded with hate mails. '' It was a dark period of my life,'' he says. After a month, the ban on the drug was lifted with certain clauses. As a precautionary measure, lower doses of the drug were recommended, the usage of the drug dropped from 40 per cent in 2004 to 4 per cent in 2008 and lawsuits cost the drug manufacturer billions of dollars.

An ardent devotee of Sathya Sai Baba, Mohan believes that anything is possible through prayer. He writes about how Srinivasa Ramanujan, the late Indian mathematical wizard, would receive inspiration for his formulae by praying to Namagiri, the goddess of creativity. ''Together, faith and self-confidence can brew magic,'' he writes. The book has an entire chapter dedicated to the power of prayer, wherein he shares an anecdote of how he had a vision of a missing textbook placed on a sack of charcoal.

''To this day, I have not been able to explain how the book got there,'' he writes. ''It instantly reinforced my faith that there is indeed a power which is beyond all of us, a power to which we can turn to for solace whenever we are in need.''

It took Mohan about two years to write the book. ''The most challenging part was finding the time to write it amidst my busy professional, academic, research and administrative schedules. But once I started it there was no looking back and I was determined to finish it,'' recalls Mohan.

Making Excellence A Habit is a delightful blend of science and spirituality. Mohan, a seeker with a spiritual bent of mind has much to offer for those who tread the uneven and meandering path of life.