With a long career in the civil services before eventually moving to politics, N.K. Singh’s life story is also a chronicling of the few crucial decades in the life of the nation. Portraits of Power, his autobiography, is much more than a ringside view of how India has evolved socio-economically. Singh’s humorous and anecdotal style enriches the retelling of both the personal and the political.

Singh writes about how his formative years were shaped by the contrasting influences of academic rigour on his paternal side and the Zamindari affluence of his mother’s family, with the highly feudal Bihari society forming the backdrop. He narrates the amusing scene at home when he got selected as a civil servant at 23. While most debated whether he should opt for IAS or IFS, his headmaster grandfather insisted that he go for the legal profession.

Singh, who was secretary to the prime minister, notes that the prime minister’s office became a powerful entity during Lal Bahadur Shastri’s tenure, unlike the popular perception that it was during Jawaharlal Nehru’s time. “Nehru’s prime minister’s secretariat was not significant since he believed in the institutional structure of the cabinet office, which he had inherited,” writes Singh.

When Shastri appointed Laxmi Kant Jha as the first secretary to the prime minister in 1964, it brought a “spectacular difference in hierarchy”, he notes. Singh adds that with the arrival of P.N. Haksar under Indira Gandhi, the practice of committed officers came into vogue and meritocracy took a back seat. 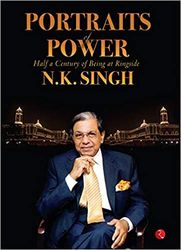 Portraits of Power: Half a Century of Being at Ringside