It is not a story of true love, but there are lovers aplenty. The House of Jaipur: The Inside Story of India’s Most Glamorous Royal Family is a tale of romance, opulent palaces, infidelity, scandal and princes who lived large—all wrapped up in an irresistible fairy-tale with no happy endings.

Author John Zubrzycki traces the history of the family that truly put Indian royalty on the international map. The book is the delicious tale of the most glamorous couple in India, who dined with the Kennedys and counted the Windsors as their friends—Gayatri Devi, or Ayesha as she is referred to in the book, and her husband Sawai Man Singh II, or Jai.

Zubrzycki has written about opulence before; The Last Nizam was a fascinating glimpse into the intrigue around the world’s richest man. Here, too, he is wonderful at blending fact, gossip and history into a heady cocktail. He vividly recreates an almost impossible-sounding world—of champagne, cocktails, shikars and parties—that existed at the cusp of Independence. It is also an ode to Gayatri Devi. Zubrzycki makes no bones about where his sympathies lie. She is the heroine of the story, but he also peppers it with the delightfully eccentric characters who surround her.

While the story of the royal couple’s whirlwind romance is well known, Zubrzycki paints it as an unequal relationship, with Jai continuing to have affairs with other women. But more than just the romance, glamour and wealth, that might seem straight out of The Arabian Nights, there is also a glimpse into the kind of turbulent times in which these characters grew up. Jai, who was adopted by Sawai Madho Singh II, was just nine years old when he ascended the throne. The fear of him being murdered was so real that his meals (sampled beforehand by food tasters) were served in special poison-detecting plates.

The extent of British control over the princes’ lives included even their sexuality. When Jai got married to 24-year-old Marudhar Kunwar, they were not permitted to consummate the marriage until he became more mature. In 1927 came the disturbing news that she had intoxicated her 15-year-old husband with wine, slept with him and was now pregnant. This turned out not to be true as each of his visits had been chaperoned. But the paternalistic attitude of the British to Jai’s sexuality reached its peak in the summer of 1927, writes Zubrzicki, when it was recommended that he not sleep with his wife until he turned 17. The reason was his alleged interest in boys and her propensity to drink. During his last year at the Mayo College for Indian Chiefs, however, he was allowed conjugal visits once a fortnight.

Peppered with fascinating stories and characters, the book is a compulsive read. Jai’s second wife, Maharani Kishore Kanwar, or Jo, was lively and struck a firm friendship with Virginia Cherrill, her husband’s lover. Jo and Virginia wrote to each other regularly. While Jai was busy writing love letters to Virginia, he was also wooing Ayesha, who later became his third wife. Then there was the powerful Roop Rai, or “the female Rasputin”, Madho Singh’s favourite concubine, who, according to British intelligence, had “hypnotic power” over the Maharaja and had convinced him that she could speak with his dead wife.

But perhaps the most fascinating character he writes about is Indira Devi—Ayesha’s mother, who spurned the Baroda Maharaja to instead marry Jitendra Narayan, who later became the Maharaja of Cooch Behar. She brought chiffon into fashion, had several affairs and was close to Jai. One of her paramours was Khusru Jung, the dashing Hyderabadi nobleman who was private secretary to the crown prince of Kashmir, Hari Singh, and with whom she had a daughter. Thrilling, deeply satisfying and engaging, the book is a must-read. 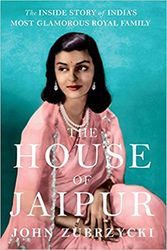 The House of Jaipur: The Inside Story of India’s Most Glamorous Royal Family