Suheldev, the king who slew the Turk Salar Masud in the Battle of Bahraich in CE 1033 has been, in recent years, resurrected from his part historical, part legendary oblivion. In a country where the history of battles is always about the brave local hero that loses to the superior invader, Suheldev’s is that one story where one can proudly get vocal for local.

There is not much in historical texts about him, except in the Persian Mirat-i-Masudi, ironically, a hagiography of Masud. However, in recent times, many communities have tried to appropriate the non-Kshatriya ruler. Amish has, therefore, freely fictionised his latest book. It allows him to play with history, and introduce a range of imaginary characters. There is not much to complain about this literary approach.

The problem with Amish’s latest offering is the writing. When he wrote his Shiva trilogy, the narrative was fantastic, even though the writing was rather plain. This time, he has used Immortal Writers’ Centre to script his story, sharing credit with the group of writers. Despite employing so many writers, or rather because of them, the storytelling has suffered.

Worse, the story is narrated in a language replete with present-day imagery and wordplay, which is jarring when telling of events from another age. You have a character who “briefly considered doing a few rounds of Surya Namaskar”, another who says, “Guilty as charged,” and yet another who says, “Careful is my middle name.” The funniest is when the hero talks about his “subaltern caste”. Not that one expects the author to write in an archaic language, but it helps to use a vocabulary more fitted to those times, or maybe even created for that. That is how George R.R. Martin created a fantasy world of Game of Thrones.

Another problem with this offering is that it is jingoistic and, like Bollywood stories of the 1970s, has characters with mandatory roles. The devout Muslim who saves temples, for instance. Or the woman warrior who steals the hero’s heart, but refuses to marry him for the good of his career. They also keep talking about India, even though the idea of India had not even formed by then. One could try and ignore these irritants, but every so often there are more jarring notes.

The book will have its loyal readers. It may do good business, too. However, for the reader who likes to lose herself in words and visualise a landscape built entirely from them, this book is a disappointment. Amish says he has too many stories to tell and not enough time to write them, thus the Writers’ Centre. But, should the stories suffer in the haste to tell them? 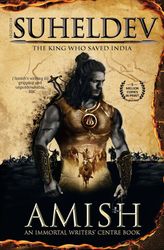 Legend of Suheldev: The King Who Saved India