It is difficult to condense a life in 173 pages. Yet, Isher Judge Ahluwalia, one of the first women in India to become a leading economist, a largely male-dominated field, does exactly that. Crisp and insightful, Breaking Through: A Memoir is essential reading for every woman who dared to dream. Her memoir comes a few months after her husband, Montek Singh Ahluwalia, released his book.

Breaking Through chronicles the last of the Delhi School of Economics generation to remain “aloof from politics… the last products of the Nehruvian consensus to which Indian intellectual life subscribed”. The rise of Naxalism and the Emergency ensured that the generations later would be more political. More importantly, it is an account of a woman who stepped into the male bastion, whether it was in Presidency College, where Isher was one of the four women out of 24 in the class, or in DSE or even when working at the International Monetary Fund.

What is also interesting is that the iconic partnership of the two blue turbans of Indian economic reform—Manmohan Singh and Montek—began with her. The two men met through Dr Udham Singh, head of Khalsa college, who had offered Isher her first job and was close to her all his life. “At that point, in 1970, Dr Udham Singh had been someone who had greatly encouraged and helped me in my career. We had no idea that the gentleman he had introduced us [to] would play a much larger role in Montek’s career in the years to come,” she writes, of their first meeting with Manmohan.

Isher narrates an incident when she was called by the prime minister’s office and offered the position of economic adviser in the ministry of industry in the 1980s. The 39-year-old had no desire to work with the government, so she went to refuse the offer in person. When she reached, she was told that she was too young for the post and could instead be deputy economic adviser. She turned it down, but not without telling off the special secretary to the prime minister. Montek, she pointed out, had been offered the job when he was 36. And she added that she had a PhD from MIT while he did not have one.

It is this spark that shines through the book. Determined as a girl, Isher was one of 11 children. She did not come from privilege, learnt English much later and could pursue her studies only because she got scholarships, including at MIT. Attending Presidency College was a battle as her father was against coeducational institutions. Isher conquered it all, and later turned around the Indian Council for Research on International Economic Relations, a leading economic think-tank.

She shares her thoughts about the slowdown under the UPA government and how she felt Manmohan appeared to have lost control of his government. “On many occasions, I wondered why the PM didn’t just resign. His continuance in office in an under-performing government was eroding his own legacy. I never said this to Gursharan [Kaur, Manmohan’s wife] or Dr Singh,” she writes.

But more than just the political, she is also honest about the personal. Isher talks about her courtship and the challenges of being a mother. The book was completed, she writes, as she was losing her ability to read and write on her own as she fights her last battle with cancer. 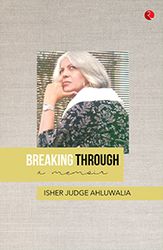 Breaking Through: A Memoir