Reading The Henna Artist is like travelling in a car that is going at just the right speed. At times, author Alka Joshi stops to point out sights and scenes on the way. At other times, she revs up the story and you find yourself on a thrilling ride to an unknown destination. And that is the best part. Just when you think you know where you are headed, Joshi takes a turn that leaves you completely in the lurch. And you are left thinking: “Wow, I did not see that coming.”

The book is about a fiercely independent and ambitious Brahmin woman, Lakshmi, who runs away from her village, husband and parents, to an entrancing life in 1950s Jaipur as a henna artist to a posse of high-society ladies. She paints her way into their innermost secrets, making herself indispensable to them. Everything is going well until, years later, her husband comes looking for her, along with a sister whose existence she was unaware of.

It is admirable how carefully Joshi has developed her characters. She says that, before writing the book, she thought a lot about what made them the people they are. “Why do they take one action as opposed to another?” she asks. “What must their family dynamics have been like? What do they think about when they are alone?” The central force of the book is, of course, Lakshmi herself. She is beautiful, intelligent and vibrant. But she is also occasionally calculating and manipulative—acting dumb or playing one of her ladies against the other—and that lets Joshi avoid the banality of perfection in her protagonist.

Lakshmi’s character was inspired by Joshi’s mother. Joshi’s parents’ marriage was arranged by their families in 1955, when her mother was 18 years old. They married after having met each other once. Her creative, hard-working mother instilled in her a sense of freedom and a belief that she could do anything and be anyone she wanted to be. That made her wonder what her mother herself would have been if she had the same freedom. “What would she have done for a living?” asks Joshi. “How would she have spent her days? What sort of people would she have interacted with? So I invented Lakshmi, a woman determined to live life on her own terms.”

Joshi, of course, lives in a world far from the exotic one of bustling bazaars and fairy-tale palaces that she has created in the book. When she was young, her family immigrated to America from Rajasthan. She did her BA from Stanford and MFA from California College of Arts in San Francisco. It was her husband Brad, whom she married at the age of 37, who got her thinking about writing. While she was learning creative writing, her mother and she would travel back and forth to Jaipur so that her mother could reconnect with her roots. “Little did I know these trips would also reconnect me with mine,” says Joshi. “The Henna Artist became my MFA thesis, and then, almost 10 years after I began writing it, it was published by MIRA/HarperCollins.”

The book received rave reviews and was the May pick for actor Reese Witherspoon’s book club. Buoyed by its success, Joshi is now working on a sequel, The Royal Jewel Cinema, which will be out in July 2021. In the meantime, get a copy of The Henna Artist, and sit back and enjoy the ride! 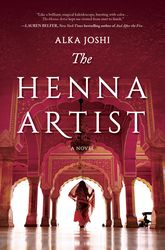