A fascinating account of battles for the hearts, minds and riches of Latin America 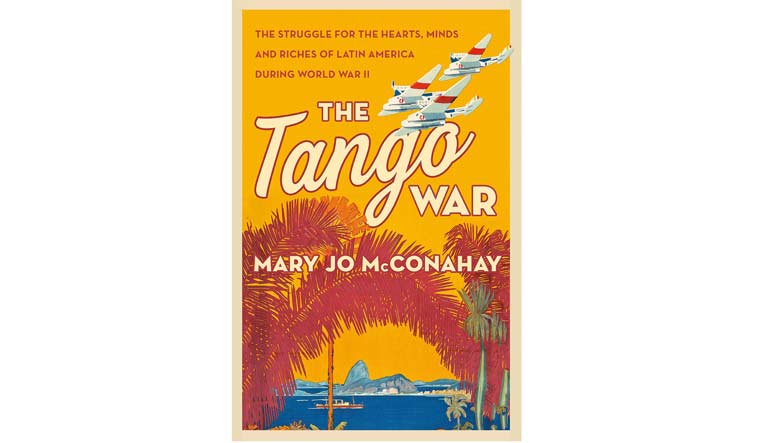 The book, Tango War by Mary Jo McConahay, has given a fascinating account of the battles for the hearts, minds and riches of Latin America fought by the Allies and Axis powers before and during the Second World War. There are so many engrossing stories, incidents and anecdotes, not well known to the world.

The Latin Americans of German, Italian and Japanese origin were caught in the crossfire. Germany and Italy, in particular, tried to brainwash their communities with propaganda and mobilise their support. The region was a hunting ground for recruitment of agents by both Allies and Axis powers. ﻿German companies such as IG Farben, Bayer, BASF, Agfa, Hoechst provided cover for agents in their Latin American branches. Hilda Kruger, the German actress was believed to be a spy during her long stay in Mexico. She had high level contacts in the Mexican government and society. She even acted in some Mexican films.

Many of the Latin American authoritarian regimes were sympathetic admirers of Fascism and Nazism in the beginning. They had flourishing trade with Germany, supplying commodities, minerals and vital materials such as platinum, tungsten and manganese. On the other hand, the US blacklisted of Latin American companies suspected of aiding the enemy or simply owned by ethnic Germans, Japanese, and Italians.

The US committed yet another injustice to Latin Americans in the name of its own security. It forced the Latin American governments to extradite several thousands people of German, Italian and Japanese origin and detained them in concentration camps in US. ﻿More than four thousand ethnic Germans and two thousand (1800 from Peru) Japanese including families and children were taken by force from fifteen Latin countries. ﻿ Some were temporarily detained in panama canal zone and used as slave labour before the onward journey to US. On arrival at US ports, the US authorities took away their passports and arrested them on the false charge of illegal entry. Some of these prisoners were exchanged with the Japanese and German governments for the release of American prisoners of war. The US could not use the Japanese and Germans living in US for the exchanges since the American law did not allow it. So they simply helped themselves with the Latino prisoners.

﻿Just as President Bush used the lie of Saddam Hussein’s ‘weapons of mass destruction’ to start the Gulf war, another US President Franklin D. Roosevelt tried a false excuse to join the Second World War. On October 27, 1941, the US President made a statement, “I have in my possession a secret map, made in Germany by Hitler’s government by the planners of the New World Order,” he told a national radio audience. The map showed the South American continent and part of Central America carved into four large vassal states to be administered by Germany at some undetermined date. “That map, my friends, makes clear the Nazi design not only against South America but against the United States as well,” said the president. The map was a fabrication by British to get US to join the war. But this lie did not matter after the Japanese attack on Pearl Harbour attack in December which forced the US hands.

﻿Before the Second World War, the German communities in Latin America took the lead in setting up airlines and many of them used German pilots as well. The airlines made use of the German air force pilots who were unemployed after the end of the First World War. Under the Treaty of Versailles, Germany was banned from having an air force. That ended the careers of many military pilots who went on to South America. The Germans had established the first carrier in South America with SCADTA (Sociedad Colombo-Alemana de Transportes Aéreos), the Colombian airline in 1919. The money behind SCADTA, its pilots, and management all came from Germany. Some of the pilots maintained their commissions in the Luftwaffe reserve. ﻿Later, the prosperous German community in Bolivia started the airline Lloyd Aéreo Boliviano (LAB which linked Bolivian cities to points in Argentina, Uruguay, Chile, and southern Brazil. Another airline ﻿Sindicato Condor, a subsidiary of the German company Luft Hansa, provided flights from Rio. Luft Hansa also took a controlling share in the SEDTA (Sociedad Ecuatoriana Alemana de Transportes Aéreos) line of Ecuador, operating it exclusively with German pilots. When the Bolivian LAB and the Brazilian Condor airlines joined forces in 1936, German hegemony in southern skies took another leap. ﻿In the 1930s, German lines often used airplanes that were simply better than the competition in Latin America,

The Americans wanted to put an end to this German domination of South American airways. In 1939, the American ambassador Braden tried to persuade the Colombian President Santos to get rid of the German pilots of SCADTA. But the President did not agree. But he did not know that Juan Trippe, the founder of Pan American Airways, had secretly bought 85 percent stakes in SCADTA from its Austrian owner, who later became a Colombian citizen. In 1940, the Ambassador worked with Trippe secretly and smuggled into Colombia 150 US pilots and dozens of maintenance technicians. The next day the management of SCADTA fired all its German pilots and technicians replacing them with Americans. The Colombian President Santos was outraged but could do nothing. The US Treasury cushioned the costs of firing the Germans by providing some financial help to Pan Am. Some of the German pilots and technicians were among those taken to internment in camps in the United States.

According to another story, the wily British intelligence got the Italian airline LATI thrown out of Brazil by provoking the Brazilian president angry with the Italians on the basis of a forged letter. LATI was carrying secret funds to South America from Germany and Italy and bringing back precious commodities such as platinum and tungsten.

Mexico made use of the time of rivalry between Axis and Allies by nationalising its oil industry. When the American and British oil majors boycotted Mexican oil, ﻿Germany and Italy bought 94 percent of Mexico’s petroleum exports between the crucial months of March 1938 and September 1939. The Axis achieved a powerful head start on the war thanks to Mexican oil. Germany had a six-month supply of oil at the start of the war. ﻿The Germans, who did not have sufficient foreign exchange, had paid in kind with machinery and manufactured goods. Mexico declared war against the Axis in May 1942 after U-boats sank two Mexican tankers.

﻿Mexico helped US by sending more than three hundred thousand agricultural workers annually to the United States to aid the wartime agricultural economy which needed to produce food for the troops besides the population. The US growers faced a sudden and urgent need for manpower to replace men who had gone on war duty. Meant to be temporary, the Bracero program saw some 4.5 million Mexican workers take part until it ended in 1964.

﻿At one time the US had a plan to occupy the northern part of Brazil. After Pearl Harbor, the US military had prepared a “Joint Basic Plan for the Occupation of Northern Brazil” with amphibious landing to take key cities and ports as well as to access the resources of Amazon including rubber. The secret operation’s nickname was Plan Rubber. Fortunately, there was no need to implement the plan after Brazil shed its neutrality and joined the Allies. Later Brazil became the only Latin American country to participate in the war with 25000 troops in Italy. Out of this, there were 800 of German origin who fought against the German army in Italy.

Ford took over a large area of 14,000 sq kms in Amazon to grow rubber trees and produce rubber in the style of the famous Detroit assembly lines. The place was called as Fordlandia. But it failed and had to be abandoned due to poor planning and management.

﻿There is the historic story of the ﻿Battle of the River Plate in 1939. Hans Langsdorff, the German captain of Uboat ﻿‘Graf Spee’ destroyed nine Allied merchant ships with more than fifty thousand tons of shipping in twelve weeks in South Atlantic. He managed to do this without loss of life among his crew or opponents. Langsdorff behaved honourably by helping the crew from the sunk vessels to evacuate safely. Eventually, the Allies hit and damaged his boat killing a few crew members. Langsdorff took his boat to Montevideo, a neutral port. There was a standoff between him and the Allied warships waiting outside the harbour in the La Plata river. Langsdorff got his boat blown up and buried the dead crew in a public ceremony, watched by thousands of Uruguayans and live coverage by the world media. He and his crew were later evacuated to Buenos Aires, where he committed suicide.