History, they say, repeats itself. Ever wonder why?

The Alchemy of Secrets begins with a dash of nostalgia “in a Bangalore that now exists only in faded newsprint and memory”. It then travels through time and space, but at a pace that does not leave you dizzy.

The book is centred around the Murthys, and tells their story across three generations. So, the backdrop shifts, in period (from pre-independence and partition to Emergency and what seems like the recent past), place (Malehalli, Bengaluru and California) and people, too—each chapter is told from a different character’s perspective, starting with Mira, her Ajji (grandmother), aunt Vimala, and later moving on to others connected with them.

Reading the book is like wading deep into the past only to come face to face with the present. For instance, when, soon after independence, news of women being assaulted and children being killed along the border with Pakistan reaches Ajji and her husband, a freedom fighter, her mother-in-law remarks, “It is the kind of food they eat up there. All that meat and wheat, it heats the blood.” It reminds you of the news reports that blamed the eating habits of the Chinese for the coronavirus outbreak, bringing to the fore our ‘othering’ tendency. Then, there is the instance of Mira and her friend, Anisa, who would go “Ganesha visiting” to houses together, being advised to not go to the temple following an altercation there. They are cautioned so because of what the adults call “Hindu-Muslim business”, but a then teenaged Mira is aware that a mosque has been pulled down in Ayodhya. It is an unfinished business even today. And, there is victim-shaming following a rape during the Emergency—the woman so brutally assaulted that she dies, her #MeToo moment shrouded in silence. But silences eventually break, and secrets, long held and suppressed, tumble out.

These are not realisations that come crashing like waves; they are more like soft undercurrents. And that is the beauty of debut novelist Priya Balasubramanian’s writing; it is simple yet evocative. A gastroenterologist and transplant hepatologist in California, Priya does not preach; all she does is hold a mirror to our past in these polarised times.

History, they say, repeats itself.... Do we ever learn? 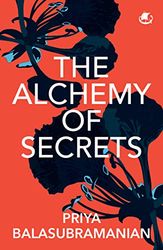 THE ALCHEMY OF SECRETS