'Sixteen Stormy Days': When Nehru decided to amend the Constitution

He introduced the Constitution (First Amendment) Bill in Parliament on May 12, 1951 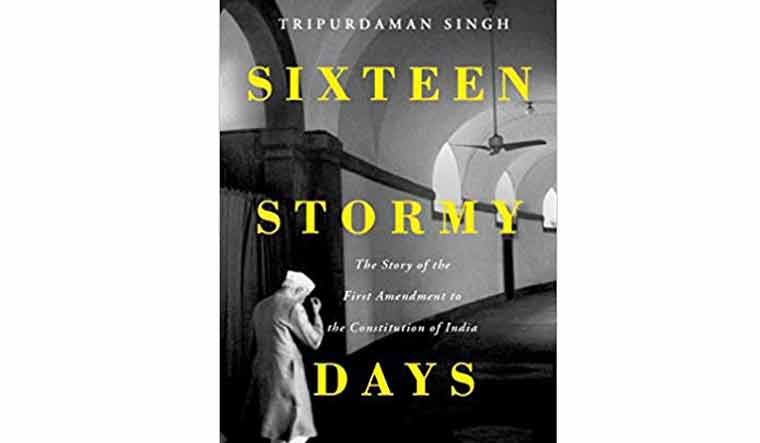 “It is impossible to hand up urgent social changes because the Constitution comes in the way,” Prime Minister Jawaharlal Nehru wrote to his chief ministers in early 1951. “We shall have to find a remedy, even though this might involve a change in the Constitution.”

It was an exasperated and somewhat angry Nehru who had decided that amending the Constitution was the only way out of a situation where the Congress party's flagship programmes had almost ground to a halt. And the story of this first amendment to the Constitution is retold in Tripurdaman Singh's Sixteen Stormy Days.

The exasperation of Nehru was well evident when he thundered, as he moved the Constitution (First Amendment) Bill to be referred to a standing committee in Parliament on 16 May 1951: “Somehow, we have found that this magnificent Constitution that we had framed was later kidnapped and purloined by lawyers.”

Singh writes in the book that Nehru had every reason to be angry. Land reform, zamindari abolition, nationalisation of industry, reservations for 'backward classes' in employment and education, a plaint press— these were the shining new schemes of social engineering that were going to remake the social and political fabric of the new nation, and Nehru moved to remove the constitutional roadblocks that held back his grand plans.

Declaring that the courts stressing fundamental rights over Directive Principles of State Policy and resultant social changes were hindering the 'whole purpose' of the Constitution itself, the prime minister introduced the Constitution (First Amendment) Bill in Parliament on May 12, 1951.

The amendment was profound indeed, and in historian Upendra Baxi's words, it amounted to being 'the second constitution' or 'the Nehruvian constitution.' The changes included new grounds on which freedom of speech could be curbed, enabling caste-based reservations, circumscribing the right to property and validating abolition of zamindari. It also introduced a special schedule under which laws could be placed to make them immune to judicial challenge even if they violated fundamental rights.

The book brings out the furore that the amendment gave rise to. Putting it in perspective, it details how the two weeks, during which the Bill was debated and passed by Parliament, represented the first battle of Indian liberalism.

“The battle raged for two weeks, in Parliament and outside, across the columns and opinion pages of newspapers, in bar associations and courtrooms, through protest meetings and angry letters to editors. The bill was eventually passed after a bitterly acrimonious debate on 2 June 1951, with 228 ayes, twenty noes and a large number of abstentations, the final numbers obscuring the intensity of the battle,” writes Singh.

And as the writer puts it, interestingly, in this battle, the first great defenders of our individual rights and freedoms included the unlikeliest of characters—Hindu nationalists like S.P. Mookerji and M.R. Jayakar, Gandhian stalwarts like Acharya Kripalani, committed socialists like Shibban Lal Saksena and Jayaprakash Narayan, conscientious Congress rebels like H.V. Kamath, Syamnandan Sahay and K.K. Bhattacharya, jurists like Pran Nath Mehta and M.C. Chagla, press associations, editors, lawyers and businessmen.

“Nehru and the Congress bent on pruning fundamental rights, Mookerji and the RSS batting for individual freedom and civil liberties— it was a truly dramatic period in Indian history,” says Singh, very aptly.