A few months before India became independent, a distressed Lord Louis Mountbatten called for his senior-most Indian civil servant, Vappala Pangunni Menon. The Viceroy's proposed plan to facilitate India's independence had thrown Jawaharlal Nehru into a rage. Menon, the Reforms Commissioner, was given precisely four hours to produce a draft compelling and comprehensive enough to determine the future of India.

In his own words, as quoted by his great-granddaughter Narayani Basu in her biography of him, Menon said, “I know people have said of me that VP always had the Plan ready. But at that time, what did I have? I had nothing."

India's political future had been decided in a matter of three hectic hours, between 7am and 10:30am that morning, writes Basu in her book, V.P. Menon: The Unsung Architect of Modern India. “By 6 o'clock that evening, he had chain-smoked his way through nearly every packet of cigarettes he had bought, he had a splitting migraine and he was nearly faint with hunger and exhaustion. However, in his hand, VP held a draft—the first official draft of the terms of India's independence, and of the future of South Asia: The Menon Plan."

Basu's biography of Menon—whom she describes as someone who played a central role in the process of India getting independence, but who was best known as Sardar Vallabhbhai Patel's right hand man—has the historian deploy her skills as a researcher to explore his life and times.

In what has already resulted in a political controversy, Basu quotes Menon saying that Nehru did not include Patel in his original list for independent India's first Cabinet. This claim was rebutted by historian Ramachandra Guha and senior Congress leader Jairam Ramesh, who have tweeted screenshots of Nehru's letters from 1947 in which Patel topped the list of his Cabinet ministers. Guha also had a Twitter face-off with Foreign Minister S. Jaishankar, who said that what Basu wrote about Patel was a revelation to him.

According to Basu, Menon was aghast when he learnt that Patel was not on the list. “I went straightaway to Mountbatten,” Menon apparently said. “I told him if you do this, you will start a war of succession. Congress will be split in two. Have no doubt about it." What makes the book special is the seamlessness with which Basu has combined her quest for the unknown facets of her great-grandfather's life with a larger perspective on the Independence movement and fresh insights on the period. 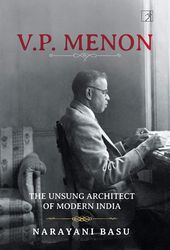