A Christian woman who rises up to head an army in the late 1700s. An Italian noble who learns Tamil and Telugu and becomes a Brahmin in Tamil Nadu. A 12-year-old Maratha king who writes a play, which becomes one of the most biting critiques of caste in society. A courtesan who indulges in erotic poetry. These are all tales from young historian Manu S. Pillai’s new book, The Courtesan, the Mahatma and the Italian Brahmin, published by Westland Books. These deeply researched tales from Indian history first appeared in the author’s newspaper columns. “Very often, at events and literature festivals I meet younger readers who enjoy these sessions but claim that big tomes on history intimidate them, partly because, at schools and universities, history was seen as a subject to avoid,” says Pillai. “At one level, these essays—concise, and five pages on average—are designed to appeal to such readers, and to persuade them to give history a chance.”

The book stresses on tales that are often left untold—of women and the lower castes—and lingering in the uncomfortable silence. Take the case of Nangeli, who, according to a very popular folklore in Kerala, cut off her own breasts to protest the breast tax that was imposed on lower caste women. To this day, academics are torn on whether Nangeli actually existed, given the dearth of documentation on her. There is nothing surprising about it, says Pillai. “As a lower-caste woman from a marginalised community with negligible literacy till the second half of the19th century, it is impossible to expect to find her in records and paper documents. Padmavati, for instance, very likely did not exist, but the legend of Padmavati is what scholars call a ‘song of resistance’. And what that song represents and what it means for a community has historical value.”

The idea of a courtesan writing erotica, expressing a woman’s right to desire and physicality in the 18th century, the legend of a Muslim princess enshrined not in one but two Hindu temples, the polemics of bhakti saints which are couched in the language of faith and devotion—all these have value, and all these need periodic resurrections in a society that easily ignores the full depth and splendour of its own past, says Pillai. “There is political history, of course, but there is also human experience. There are kings, but there are also the persecuted. And most importantly, it is not just male heroes, but women through whom we must try and understand Indian history.” 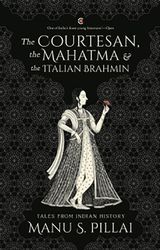 The Courtesan, the Mahatma and the Italian Brahmin