A day after California massacre, nine people dead in three more shooting incidents in US 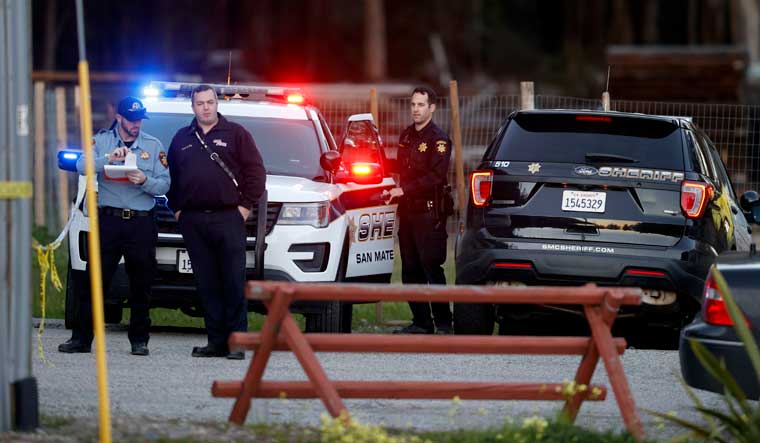 San Mateo County Sheriffs officers and EMS personnel gather along a road at a location near where multiple people were found shot to death on Monday in Half Moon Bay, California | AP

A day after the California dance hall shooting, three separate shooting incidents were reported in the US, which claimed the lives of nine people.

The first occurred at two locations in the coastal northern California city of Half Moon Bay, reported AFP. The second incident happened in Iowa at an educational mentorship programme for at-risk youths.

The San Mateo County Sheriff's Office, a 67-year-old man suspected to be the Half Moon Bay shooter is in custody. According to the investigators, deputies responding to a call found four people dead and a fifth victim wounded at the first location in Half Moon Bay. Further investigation three more died at another place nearby.

One of the locations was a mushroom farm, SanFransico Chronicle reported.

Investigators identified the suspect as 67-year-old Zhao Chunli. Officers who responded to the incident found Chunli’s car in a parking lot two hours after the incident where he was taken into custody. They recovered the murder weapon from his car. "There is no current outstanding threat to the community," Allen said in the statement.

California Governor Gavin Newsom took to Twitter moments after news broke of the new incidents. "At the hospital meeting with victims of a mass shooting when I get pulled away to be briefed about another shooting. This time in Half Moon Bay. Tragedy upon tragedy," he tweeted.

The shooting incident in Iowa happened at a youth outreach centre in Des Moines on Monday. Two students were killed and a third was seriously wounded.

"Those two people, both students, are dead now at the hospital. The third person, who is an employee of the school, is in a serious condition," a spokesman for the Des Moines police department was quoted by AFP.

There is no clarity about the age of the deceased, whether they are adults, teens or minors. Police have detained three possible suspects in the shooting as the investigation continues. More details are awaited.

The death toll from the weekend shooting in Monterey Park has risen to 11 after one of the injured taken to LA County-USC Medical Center for treatment died, according to US media reports.

Another injured patient, a 73-year-old woman, was discharged on Monday while two more were still being treated.

Ten people were killed and 10 others wounded when the suspect, Huu Can Tran, opened fire at the Star Ballroom Dance Studio, a venue popular with older patrons of Asian descent. Tran later shot himself as police closed in.