Johnson says UK is interested in helping Ukraine with reconstruction 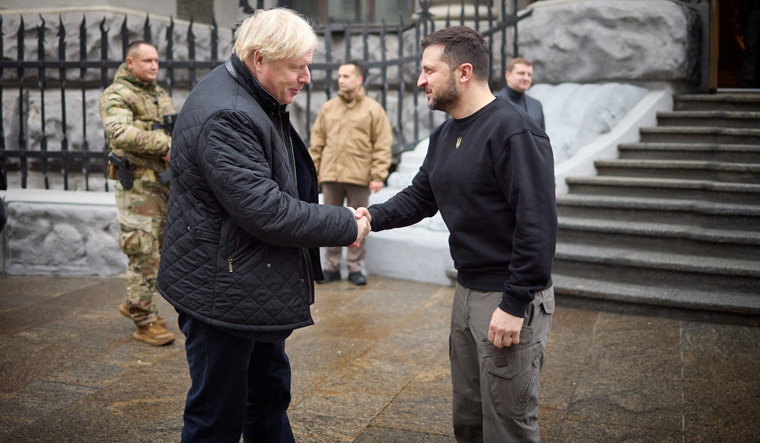 Former British Prime Minister Boris Johnson visited Ukraine and assured that the UK would stand by the nation 'As long as it takes.' Johnson also said that the UK was interested in helping Ukraine with reconstruction.

The former PM made a surpirse visit to Kyiv but said he was there at the invitation of Ukraine President Volodymyr Zelenskyy. "I can tell you that the UK will be sticking by Ukraine for as long as it takes," Johnson was quoted saying to the mayor of Bucha by Reuters.

During his trip, Johnson visited Borodyanka and Bucha during the visit. "You're going to win and you're going to get all the Russians out of your country, but we will be there for the long-term. And we will also want to be helping you to reconstruct," he said speaking through an interpreter, Reuters reported.

Johnson, who resigned as PM in September in the wake of a series of scandals, was prime minister when Russia invaded Ukraine last February and he sought to position London as Ukraine's top ally in the West. While he was in office, Johnson visited Ukraine several times and also contacted Ukraine's President frequently.

Johnson became popular in Ukraine and even cafes named cakes after him. In Bucha, Johnson paid tributes to victims of war. In Borodyanka, he walked the streets by ruined residential blocks. Kyiv regional governor Oleksiy Kuleba, who accompanied him, said that 162 residents were killed during the month-long Russian occupation of the town last year, Reuters reported.

Downing Street indicated that the PM was supportive of Johnson's visit. “PM is always supportive of all colleagues showing that the UK is behind Ukraine and will continue to support them,” The Guardian reported.