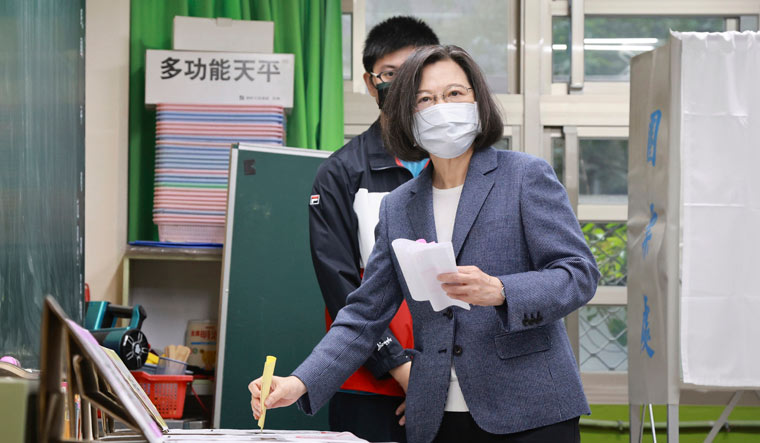 Amid China tensions, local midterm election voting begins in Taiwan on Saturday. These elections are crucial and grabs global attention this year as Taiwan becomes a bigger geopolitical flashpoint between China and the US.

Ahead of the 2024 presidential elections, these midterm elections will determine the strength of the island's major political parties. The citizens will elect mayors and city councils in all 13 counties and in nine cities.

The Chinese government sees Taiwan as a breakaway province that will, eventually, be part of the country, BBC reported. It further reported that many Taiwanese people consider their self-ruled island with its own form of government and a democratic system to be distinct.

Also, this election gains significance as it involves a referendum to lower the age of voting to 18 years. Presently, only those above the age of 20 years can vote. According to reports, the youths of Taiwan are becoming politically conscious at a very young age itself.

The two major parties in Taiwan are the Kuomintang (KMT), a party of conservative business champions and the governing Democratic People's Party (DPP). In the 202 national elections, DPP's leader Tsai Ing-wen won by a landslide.

While international observers and the ruling party have attempted to link the elections to the long-term existential threat that is Taiwan's neighbour, many local experts do not think China has a large role to play this time around, reported Associated Press (AP).

"The international society have raised the stakes too high. They've raised a local election to this international level, and Taiwan's survival, Yeh-lih Wang, a political science professor at National Taiwan University was quoted by AP.

President Tsai Ing-wen casted her vote on Saturday morning and urged people to come forward to cast their votes.

Tsai, who also chairs the ruling Democratic Progressive Party, has spoken out many times about opposing China and defending Taiwan in the course of campaigning.

Meanwhile, according to reports, DPP's mayor candidate in Taipei, Chen Shih-chung, rather than addressing the grave issue only raised the Communist Party's threat a few times and stressed the local issues.

During campaigning, there were few mentions of the large-scale military exercises targeting Taiwan that China held in August in reaction to US House Speaker Nancy Pelosi's visit, AP reported.

Instead, campaigns resolutely focused on the local: air pollution in the central city of Taichung, traffic snarls in Taipei's tech hub Nangang, and the island's COVID-19 vaccine purchasing strategies, which had left the island in short supply during an outbreak last year.

In all ways, as per reports this year's election will be one of the challenging elections.