With 6 million views, Queen Elizabeth's final flight is the most tracked ever

The website that tracks thousands of flights across the globe crashed 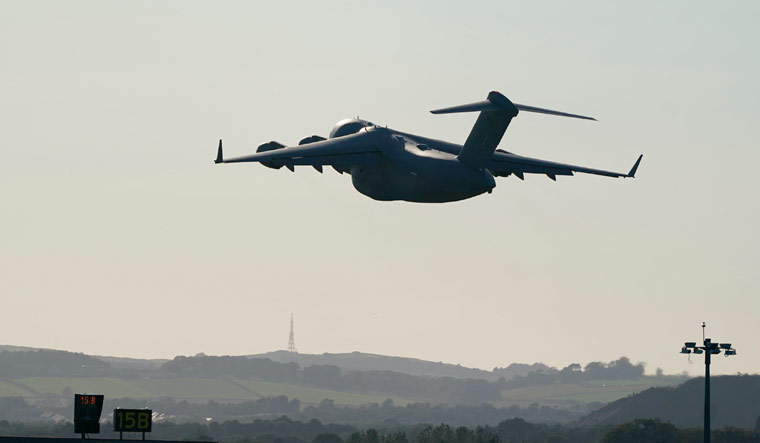 Over six million people logged onto the flight tracking website, Flightradar24, on Tuesday to watch Queen Elizabeth II's final flight, making it the most tracked ever in the website's history. The queen's mortal remains were transported to London from Edinburgh on a C-17 Globemaster transport plane bearing flight number KRF01R.

"Seventy years after her first flight as Queen aboard the BOAC Argonaut 'Atalanta,' Queen Elizabeth II's final flight is the most tracked in Flightradar24 history," Flightradar24 Director of Communications was quoted by Reuters.

Between web, apps, and live stream, 5 million people followed the flight from Edinburgh to RAF Northolt on Flightradar24. https://t.co/sCCrSadVLk pic.twitter.com/sdE9VMyH8f

The website that tracks thousands of flights across the globe crashed moments before the flight's take-off.

In a tweet, FlightRadar24 confirmed: 'In the moments before takeoff, nearly six million people attempted to follow the flight, causing disruption to our platform. We are working to ensure stability across our platform at the moment.'

Another tweet confirmed: '600k able to follow. Six million total attempts (which is what brought the site down).'

Reports added that FlightRadar24 had already implemented 'a number of traffic calming measures' to cope with the anticipated demand ahead of the flight but couldn't take the load once all the users logged in.

Before Queen Elizabeth's final flight, the record for the most watched flight belonged to the Boeing C-40C flight that carried Nancy Pelosi on her controversial trip to Taiwan. Over 2.2 million people watched the flight then, causing the website to crash.

Meanwhile, the plane used for the Queen's final journey has a rich tradition of being used for several humanitarian missions. According to the head of the Royal Air Force Air Chief Marshal Sir Mike Wigston, the plane has helped 'extensively' in disaster relief efforts around the world, including the evacuation of thousands of people fleeing the Taliban in Kabul last year.

Queen Elizabeth II’s coffin has since arrived at Buckingham Palace, and the Royal Family received it on its arrival. The coffin was accompanied by the Queen's daughter Princess Anne who described the journey with her late mother's coffin from Scotland to England as an honour and privilege. "I was fortunate to share the last 24 hours of my dearest Mother's life. It has been an honour and a privilege to accompany her on her final journeys,” she said in a statement.