Quad leaders denounce the use of terrorist proxies 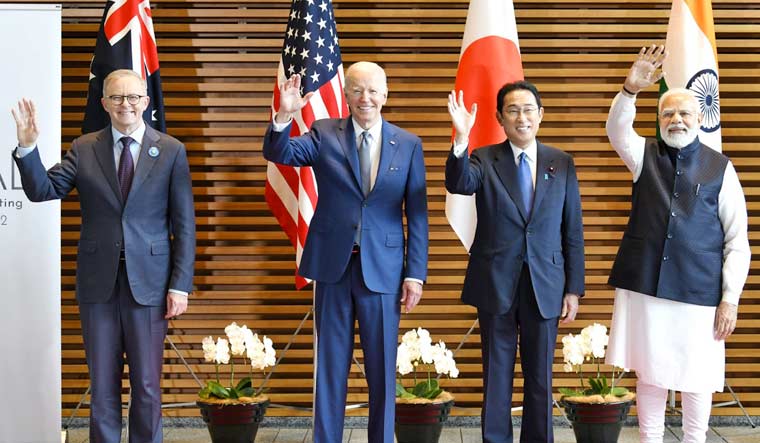 The Quad countries on Tuesday unequivocally condemned terrorism and violent extremism in all its forms and manifestations, and reiterated their condemnation of terrorist attacks, including the 26/11 Mumbai and Pathankot attacks perpetrated by Pakistan-based terror groups. Prime Minister Narendra Modi, US President Joe Biden, Japanese Prime Minister Fumio Kishida and Australia's newly-elected Prime Minister Anthony Albanese said in a joint statement that there can be no justification for acts of terror on any grounds whatsoever.

“We denounce the use of terrorist proxies and emphasize the importance of denying any logistical, financial or military support to terrorist groups which could be used to launch or plan terror attacks, including cross-border attacks,” the statement said.

The leaders reaffirmed the UNSC Resolution 2593 (2021), which demands that Afghan territory must never again be used to threaten or attack any country or to shelter or train terrorists, or to plan or finance terrorist attacks. They also emphasized the importance of upholding international standards on anti-money laundering and combating the financing of terrorism by all countries, consistent with FATF recommendations.

“We reaffirm that in our fight against global terrorism, we will take concerted action against all terrorist groups, including those individuals and entities designated pursuant to the UNSC Resolution 1267(1999),” the statement said.

The statement said the Quad countries are committed to cooperation with partners in the region who share the vision of a free and open Indo-Pacific. The leaders welcomed the EU’s Joint Communication on the EU Strategy for Cooperation in the Indo-Pacific which was announced in September 2021 and increased European engagement in the region.

In a clear message to China, the leaders said they oppose any provocative or unilateral actions that seek to change the status quo and increase tensions in the East and South China Seas.

“We strongly oppose any coercive, provocative or unilateral actions that seek to change the status quo and increase tensions in the area, such as the militarization of disputed features, the dangerous use of coast guard vessels and maritime militia, and efforts to disrupt other countries’ offshore resource exploitation activities,” they said.

The Quad leaders expressed concerns over the humanitarian crisis in Myanmar, which they said has posed challenges to regional stability.

“We continue to call for the immediate end to violence in Myanmar, the release of all political detainees, including foreigners, engagement in constructive dialogue, humanitarian access, and the swift restoration of democracy,” they said.

The leaders reaffirmed their support for ASEAN-led efforts to seek a solution in Myanmar and welcomed the role of Special Envoy of the ASEAN Chair.