Cash-strapped Pakistan is passing through a phase of economic turmoil 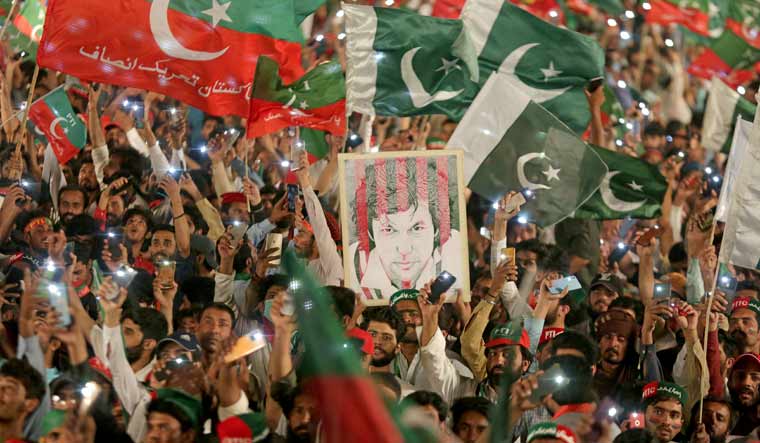 Over 100 activists belonging to ousted Pakistani premier Imran Khan's party have been arrested in the country's Punjab province for a planned mega-march to the federal capital, Islamabad, demanding early elections.

The police, who later confirmed that the arrests were made at the behest of the ruling Pakistan Muslim League-N (PML-N) ruling coalition, launched the clampdown on Pakistan Tehreek-e-Insaf (PTI) activists late on Monday night.

PTI chief Khan has demanded the government to dissolve the Federal Assembly and call for elections. To press these demands, the PTI protests have grown louder with each passing day. The agitators were scheduled to assemble in Islamabad on May 25.

"Police have so far arrested over 100 PTI activists, including a lady lawmaker Rashida Khanum, from different parts of Punjab province to stop them from reaching Islamabad to take part in the 'Azadi March'," said PTI Punjab information secretary Mussarat Cheema.

She said most of the PTI office bearers and workers were arrested from Lahore. She said a number of provincial leaders of the party have gone underground to escape the arrests. She said the arrests were 'fascist tactics' of Prime Minister Shehbaz Sharif to stop the PTI workers from reaching Islamabad.

He said one party worker suffered injuries in Gujranwala city, 80 km from provincial capital Lahore, during a clash with a police raiding team.

He warned the government was forcing the PTI workers to besiege the Raiwind Residence of the Sharif family. He also uploaded videos of police raids at various PTI workers and leaders' homes.

PTI chairman Khan, in a tweet on early Tuesday, said: "Peaceful protest is the right of all our citizens. The brutal crackdown on PTI leaders and workers in Punjab and Islamabad has once again shown us what we are familiar with - the fascist nature of PML-N when in power. The present crackdown also raises serious questions about the handlers."

"This is the difference between democrats and kleptocrats," Khan said, adding that already the economy was in a tailspin.

"I want to warn the crooks and their handlers that these undemocratic and fascist steps will further exacerbate the economic situation and push the country into a state of anarchy."

Cash-strapped Pakistan is passing through a phase of economic turmoil.

The newly-formed Shehbaz Sharif government is saddled with an economy which is still recovering from the COVID-19 pandemic and is dealing with spiked global prices of essential goods due to the Russia-Ukraine war and other such conflicts.

According to a senior police officer, the PML-N led ruling government had issued the arrest orders and to take PTI leaders and workers into custody.

"We will seal GT Road and motorway at different points to stop the PTI workers from reaching Islamabad on May 25," an official said.

Ruling PML-N supreme leader and three-time prime minister Nawaz Sharif tweeted that the people should not be left at the mercy of miscreant jathas (group of people) which already played havoc with their lives," he said.

Earlier, the nine-party coalition government at the Centre had claimed that it would not stop anyone from coming to Islamabad to join the PTI protest.

However that contradicts the police action on Monday night.

Interior Minister Rana Sanaullah and Defence Minister Khawaja Asif have affirmed that the government would complete its tenure till August 2023.

Khan, ousted through a no-trust vote on April 10, has accused the US of orchestrating the fall of his government after his decision to follow an independent foreign policy over the issue of Ukraine.

The US State Department, Pentagon and the National Security Committee (NSC) of Pakistan have repeatedly rejected the accusations.

However, Khan has refused to accept it and has been pressing with the claim at his public rallies.