China goes on offensive against IPEF, projects it as 'economic NATO' to blunt its dominance

The US-led trade deal has already caused consternation in Beijing 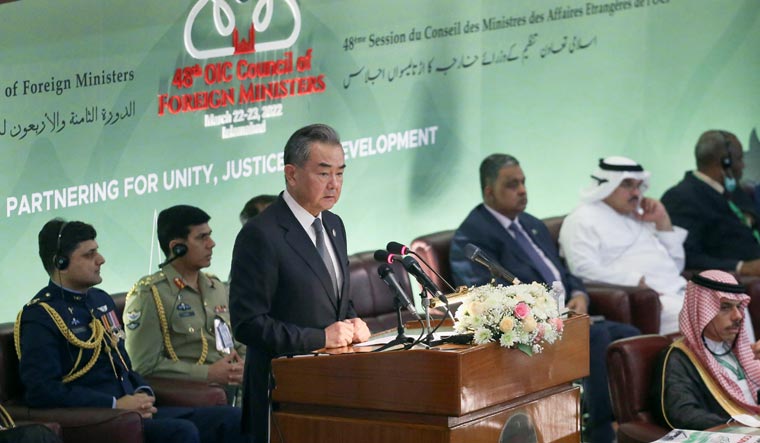 As US President Joe Biden launched a new trade deal with 12 Indo-Pacific nations, including India, to enhance trade, economic and investment opportunities, China, which sees the pact as a threat to its dominance in the region, went on the offensive against it, promising more opening up, while the official media here termed it as economic NATO.

On the eve of the Quad summit in Tokyo, Biden on Monday launched the ambitious Indo-Pacific Economic Framework for Prosperity (IPEF), which is an initiative aimed at deeper cooperation among like-minded countries in areas such as clean energy, supply-chain resilience and digital trade.

The IPEF is expected to send across a signal that the US is focused on pushing forward a strong economic policy for the region to counter China's aggressive strategy on trade in the region. The countries joining at the launch of the US-led initiative are Australia, Brunei Darussalam, India, Indonesia, Japan, Republic of Korea, Malaysia, New Zealand, the Philippines, Singapore, Thailand, and Vietnam.

The US-led trade deal has already caused consternation in Beijing as its Foreign Minister Wang Yi on the same day offered more higher cooperation to the Indo-Pacific region with better Belt and Road Initiative (BRI) projects and investments.

Addressing the Economic and Social Commission for Asia and the Pacific (ESCAP) through a video link around the same time the IPEF was launched on Monday, Wang said the Asia-Pacific region is where China lives and thrives.

China will continue to focus on the Asia-Pacific for its benefit and make greater contributions to its lasting peace and sustainable development with concrete actions," he said. Without naming IPEF, Wang said Beijing will advance China's accession to the Comprehensive and Progressive Agreement for Trans-Pacific Partnership and the Digital Economy Partnership Agreement to counter the new trade and economic initiative of the Quad alliance.

He said Beijing will strengthen dialogue and cooperation" with other Asia-Pacific countries to implement the Global Security Initiative (GSI), widely seen as Beijing's initiative to counter the Quad alliance, which comprises India, the US, Japan and Australia.

He reiterated his criticism against Quad, saying the region should unswervingly safeguard peace and stability and unequivocally reject any attempt to introduce military blocs and bloc confrontation into the Asia-Pacific region.

State-run Global Times quoted Chinese strategic experts terming IPEF as economic NATO while acknowledging that it will provide some opportunities for the countries in the region.

Beijing criticises the Quad alliance as Asian NATO aimed at stifling its rise. The initial list of member countries of IPEF, as disclosed on Monday, is similar to that of the Regional Comprehensive Economic Partnership (RCEP), with the absence of China, Laos, Cambodia and Myanmar and with the addition of the US and India, the report by the daily said.

It quoted experts as saying that compared with the RCEP, IPEF could be something like an "economic NATO," with the US adding concrete rules to its framework in the coming years to serve its interests.

Inclusion in the IPEF framework would bring some economic benefits to ASEAN members in terms of investment and trade, Gu Xiaosong, dean of the ASEAN Research Institute of Hainan Tropical Ocean University, told the daily.

Vietnam, for instance, might enjoy some "policy bonuses" under the framework to further strengthen its textile and digital exports to the US.

Gu surmised that the US should have chosen its IPEF partners based on both political and economic criteria, as countries that can help to weaken the competitiveness of China in terms of industries are selected.

Chinese experts say that in the next step the US may choose to distribute its industrial chains along with different members under the IPEF framework and carry out cooperation. Countries that are too small in economic scale and are deemed as having relations that are too close with China won't be considered by the US, they said.

As the US still wields considerable influence over many countries in the region, the IPEF could hold varying degrees of appeal to different members.

Some ASEAN members joined the IPEF because the US has a grip on many core high technologies such as chips and software, and ASEAN members are concerned about possible US exclusion, Wang Yiwei, director of the Institute of International Affairs at the Renmin University of China said.

Nonetheless, the US, in its containing campaign to check China's growth may be willing to sacrifice some of its economic interests, experts warned.

In dealing with the situation, China should upgrade its RCEP cooperation, such as accelerating digital partnership negotiations with ASEAN members, Wang Yiwei said. The relations between China and the Quad member countries have become tense, with Beijing increasingly challenging democratic values and resorting to coercive trade practices.

India, the US and several other world powers have been talking about the need to ensure a free, open and thriving Indo-Pacific in the backdrop of China's rising military manoeuvring in the region.

China claims nearly all of the disputed South China Sea, though Taiwan, the Philippines, Brunei, Malaysia and Vietnam all claim parts of it. Beijing has built artificial islands and military installations in the South China Sea.