US pledges $700 million in military aid to Ukraine

US diplomats to gradually return to the country 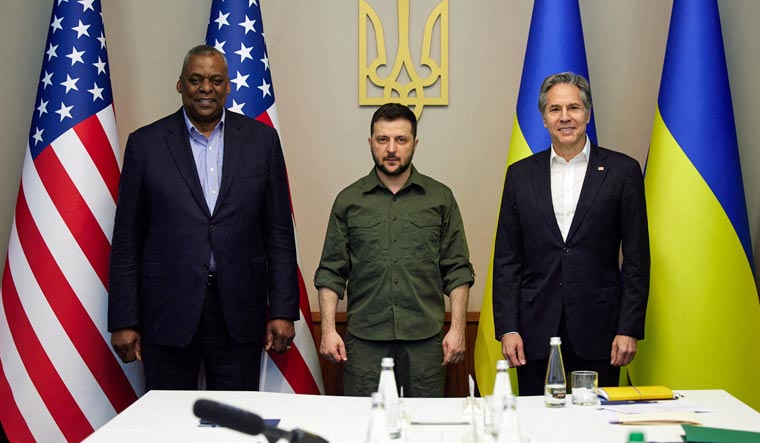 Ukraine's President Volodymyr Zelenskiy poses for a picture with US. Secretary of State Antony Blinken and US Defense Secretary Lloyd Austin before a meeting, as Russia's attack on Ukraine continues, in Kyiv, Ukraine April 24, 2022 | Reuters

US Secretary of Defence and top diplomat have said that US diplomats will return to Ukraine. The US also announced fresh military aid to the country and that Washington would nominate a new ambassador to Ukraine. The US's Defence Secretary Lloyd Austin and Secretary of State Antony Blinken announced military aid worth $700 million. Thousands have been killed and displaced-- Russia's invasion of the country enters its third month.

A US official told the Guardian, “This assistance will also help Ukraine’s armed forces transition to more advanced weapons and air defence systems, essentially Nato-capable systems.” From the promise of $700 million in aid, about $ 400 million will be split among 15 other nations in central and eastern Europe and the Balkans. This will be in form of cash, which will allow the nations to purchase what might be needed. The US has been a leading donor of arms and financial aid to the country. It has, however, been reluctant to intervene militarily amidst Russia's threats to use nuclear weapons.

Washington also said that US diplomats will gradually start making day trips to Lviv in the coming week. Separately, UK's defence ministry said that Russia is planning a staged referendum in the city of Kherson to justify the invasion.

Ukraine's Deputy Prime Minister Iryna Vereshchuk said that Ukraine will try to establish humanitarian routes from the Mariupol, which is currently surrounded by Russian forces.