Ukraine's State Emergency Service has said that more than 2,000 civilians have died 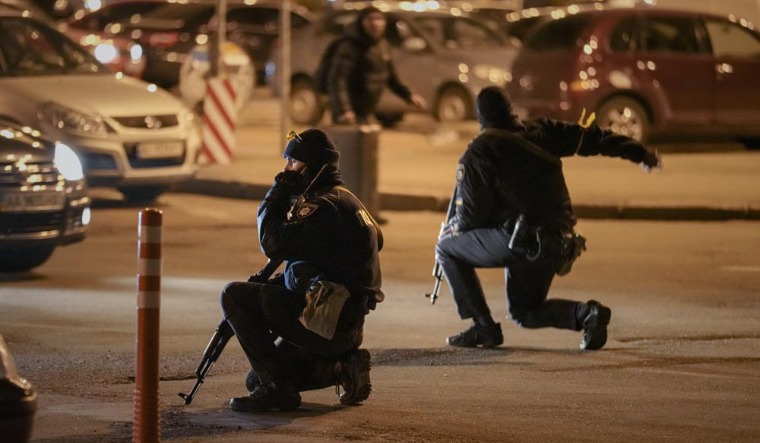 The International Criminal Court prosecutor has launched an investigation that could target senior officials believed responsible for war crimes, crimes against humanity or genocide amid a rising civilian death toll and widespread destruction of property during Russia's invasion of Ukraine.

An investigation by the International Criminal Court into Russia's barbaric acts is urgently needed and it is right that those responsible are held to account, British Foreign Secretary Liz Truss said. The U.K. will work closely with allies to ensure justice is done.

After informing the court's judges of his decision to open an investigation that covers all sides in the conflict, Khan said: Our work in the collection of evidence has now commenced.

Ukraine's State Emergency Service has said that more than 2,000 civilians have died since the Russian invasion, a claim that was impossible to verify.

There also have been reports of the use by Russian troops of cluster bombs, with a preschool and a hospital both reportedly hit.

Rights groups on Thursday welcomed the nations' request for an investigation.

The request for an ICC investigation reflects the growing alarm among countries about the escalating atrocities and human rights crisis that has gripped Ukraine, said Balkees Jarrah, interim international justice director at Human Rights Watch. These governments are making clear that serious crimes will not be tolerated and that the court has an essential role to play in ensuring justice.

The court already has conducted a preliminary probe into crimes linked to the violent suppression of pro-European protests in Kyiv in 2013-2014 by a pro-Russia Ukrainian administration and allegations of crimes in the Crimean Peninsula, which Russia annexed in 2014, and eastern Ukraine, where Moscow has backed rebels since 2014. It found a broad range of conduct constituting war crimes and crimes against humanity within the jurisdiction of the court have been committed in Ukraine, Khan's predecessor, Fatou Bensouda, said at the time.

Those findings also will be included in Khan's investigation.

Putin and his military top brass could potentially face charges for ordering attacks that breach the laws of war, said Marieke de Hoon, assistant professor of international criminal law at the University of Amsterdam.

"The ICC is created to circumvent Putin's head of state immunity in foreign courts," De Hoon said. The ICC can now continue its investigation, open cases and issue arrest warrants.

But she also noted the ICC can only put a suspect on trial in The Hague if they are arrested. The court doesn't have a police force to detain suspects and relies on international cooperation to enforce its arrest warrants. Under ICC rules, suspects can't by tried in their absence.

How armies are allowed to act during military conflicts is governed by what is known as international humanitarian law, the aim of which is to protect civilians and rein in the use of force.

"That means that a certain category of people  so-called combatants, who distinguish themselves from civilians and are engaged in the armed conflict  can use force but only against military targets and then only when those are necessary, and only with proportional means, said De Hoon.

To be classed as crimes against humanity, attacks have to be part of what the ICC's founding treaty, the Rome Statute, calls a widespread or systematic attack directed against any civilian population.

The use of munitions such as cluster bombs also likely will, if confirmed, qualify as war crimes because of their indiscriminate nature.

It's impossible with those types of weapons to distinguish between military targets and civilians, De Hoon said.

While Khan has now opened an investigation, he most likely won't be able to send investigators into Ukraine to collect evidence and speak to witnesses while war is still raging.

It is hard to investigate on the ground now, De Hoon said. But there are a lot of open source investigations possible, using for instance satellite images and social media posts. Other states can also share the evidence they collect with the ICC.

The ICC was set up in 2002 to prosecute war crimes, crimes against humanity and genocide. The crime of aggression, which can't be investigated in Ukraine because neither Russia nor Ukraine is a member of the court, was added later. The ICC is a court of last resort, taking on cases when national authorities are unwilling or unable to prosecute.

Over the past 20 years, its prosecutors have filed charges against military and government leaders in several countries, but it hasn't managed to bring many to justice.

One of the first suspects charged by the court was Joseph Kony, a Ugandan warlord who leads the cult-like Lord's Resistance Army rebel group. An international arrest warrant for Kony was issued in 2005 but he remains at large.

Another high profile fugitive is ousted Sudanese leader Omar al-Bashir, who still hasn't been handed to the ICC despite arrest warrants dating back to 2009 and 2010 for allegedly ordering atrocities in the Darfur region.

As Khan launched the court's latest investigation, he put combatants and their leaders on notice that he is watching them.

With an active investigation now underway, I repeat my call to all those engaged in hostilities in Ukraine to adhere strictly to the applicable rules of international humanitarian law, he said. No individual in the Ukraine situation has a license to commit crimes within the jurisdiction of the International Criminal Court.