The mystery pilot has been called an ace on social media 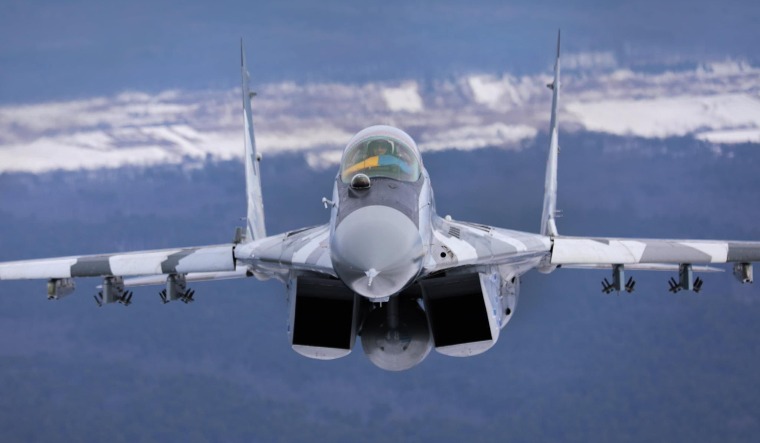 Amid the harrowing footage showing human suffering from the Russian attack on Ukraine, many on social media have drawn inspiration from a mysterious MiG-29 jet appearing over Kyiv.

Social media handles shared clips of a Ukrainian fighter pilot, who they claimed had downed six Russian fighter jets on Thursday. The pilot was dubbed ‘Ghost of Kyiv’. If he indeed shot down six aircraft, he would be the first 'ace' of the 21st Century, an ace being a pilot who has shot down five or more enemy aircraft.

Multiple handles claimed the MiG-29 pilot shot down two Su-35s, one Su-27, one MiG-29 and two Su-25 jets. While Ukraine claimed to have shot down seven Russian aircraft on the first day of the conflict, there is no clarity on how exactly they were downed—by other aircraft or by anti-aircraft guns or missiles fired from the ground.

At midday on Friday, Ukraine's Ministry of Defence shared an image of a MiG-29. It tweeted “Dozens of experienced military pilots from the captain to the general, who had previously been discharged from the reserve, are returning to the Air Force of the Armed Forces. Who knows, maybe one of them is the air avenger on the MiG-29, which is so often seen by Kyivites!”

The tweet appeared to be an attempt at boosting public morale rather than confirming the existence of a mystery ace.

According to estimates, Ukraine possessed over 200 MiG-29s when the Soviet Union collapsed. However, the fleet dwindled to around 80 jets at the time of the Russian invasion of Crimea in 2014. However, Russia seized dozens of MiG-29s as they were stationed in Crimea.

It is yet unclear how many MiG-29s remain operational with the Ukrainian Air Force.

Both the MiG-29 and the larger Su-27—which is the basis for the multi-role Su-30 and Su-35 designs—were created around the same time. While The MiG-29 was meant to be a lighter, short-range fighter, the Su-27 was heavier and meant for longer ranges.